Between running and hiking trips involving marathon or greater distances, it’s sometimes nice to have a small trip which doesn’t involve complete exhaustion. I’d reached out on Facebook, at work, and even a friend’s party to promote what I billed as a “beginner friendly” trip to Chetwoot Lake. Never mind the 5am start, 5,000 ft of gross elevation gain, and that the last 1.5 miles of the trip was on a primitive trail. Ultimately, the only folks to join were companions from some of these previous social trips. The start time got moved to 7:30am, we turned back after attaining the ridge where the trail turn primitive, but had some time to enjoy camp and didn’t have to spend as much time hiking in the rain on the way back.

The trail starts out from the West Foss River Trailhead quite level, if twisty, crosses two bridges and climbs slowly to a giant tree (Chris and Anda took turns hugging it) and then Trout Lake.

After Trout Lake the climb becomes steeper and switch backs get involved. The grade eases at the top and after a bridge crossing and a rock hop, you find yourself at Copper Lake. This uphill hike didn’t prevent a running conversation between Chris and Anda. I’d throw in a thought here or there but mostly content to listen.

Chris made a wrong turn at one point following an unsigned trail off to what was either a campsite or Malachite Lake. I debated letting him go but Anda had followed and it felt a little mean. I was amused that they turned off of a straight and well beaten trail for a less used one but I frequently reach the turn in a switch back and attempt to continue forward not realizing the trail has zagged under me so I can’t laugh too hard.

We had lunch at Copper Lake. There isn’t much shade (the picture above is after we continued) and so we didn’t linger. A man in a Forest Service uniform came through carrying a bag of trash which he and a non-uniformed counterpart appeared to be collecting. We chatted them up, thanking them for their efforts. I asked what the most unexpected thing they’d ever found was. The man gave a clever answer which reflected on how times have changed but left some things to the listener’s imagination. Chris made him spell it out which was a little painful.

Looking back during the the climb out of Copper Lake was the beginning of the fulfillment of my visual desires for this trip. 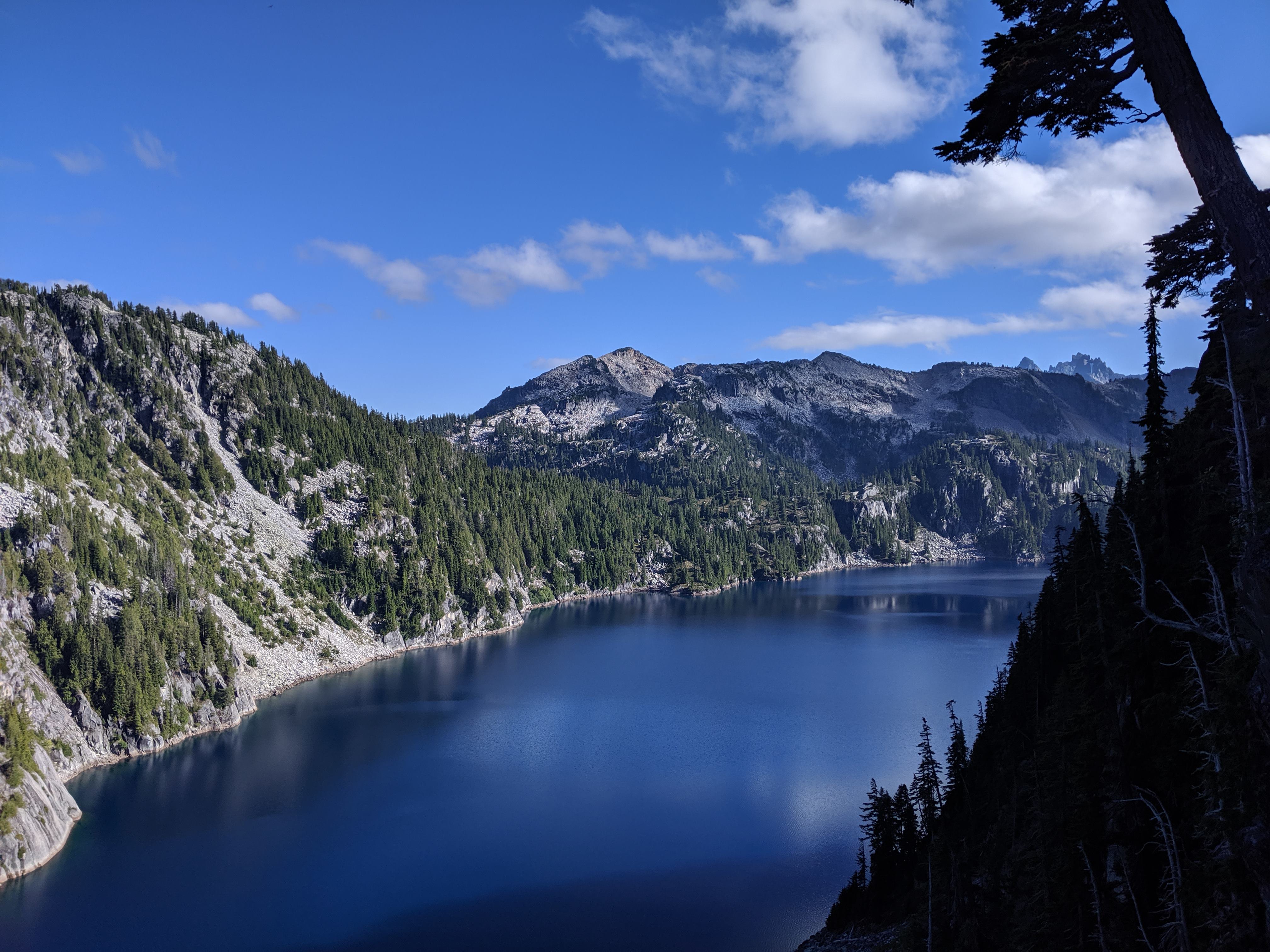 Little Heart Lake is barely a pond (or else we didn’t see it) and so we continued up and over to Big Heart Lake. This was steeper than I remembered but we weren’t moving fast so it was fine. The trail in this section is pushed around a great deal by underlying geological features. I felt much more of a guest of nature’s whim than a member of the race which invented bulldozers, graders, and asphalt.

Since Big Heart Lake wasn’t our destination our break there was brief. The walk-able shoreline extends very little beyond the log jamb at the outlet stream and so after a quick snack and chance to find where the trail properly continues after the Big Hear Lake outlet stream (my trip here last year did not make this connection easily), we continued up towards the ridge which separates Big Heart and Angeline Lakes.

The trail begins to become less well traveled as slightly more rugged though it’s still clear. However the trail splits where it turns south to climb the ridge west of Angeline. I Chris and Anda took the way with less immediate climbing though I was pretty sure we needed to go up. It was shortly thereafter that I remembered taking their way last year, it dead-ending, and having to go up hill instead. The problem is that the drop into Angeline lake, far below happens very quickly and anything which doesn’t get up on the ridge and stay there is cliffed out almost immediately. This is actually a great boon as the trail splits in several places in the area and even if you take a wrong turn, you’re pretty quickly turned back.

Eventually we attained the top of the ridge got the views I’d been hoping for. Big Heart spread out to the right, Angeline to the left. So much water and granite. It was now 4:27pm leaving about 2.5hrs of daylight. There had already been one concern voiced that the route was too rugged, particularly if it was going to rain on the return trip. We’d struck a deal to continue until 4:30pm then decide whether to turn back and the progress since then had been very slow and things were going to generally get rougher ahead. Since this was a pleasure trip, the right call was to turn around to keep everyone feeling comfortable.

We camped just above Big Heart Lake and I got to set up my new tent. I’ve spent an excessive amount of time trying to figure out my next tent purchase and the initial impression was pretty good. The unique thing with this design (it’s supported by trekking poles) is the left pole is near your head and the right pole is near your foot. Most designs have them either in the same position with respect to your body (usually near the waist) or have a pup-tent/A-frame style with one pole centered above the head and the other centered below the feet. There are only two other tents I know of on the market with this design, both designed by experienced through-hikers. This is a more recent design, also by an experienced outdoors traveler, which takes a middle road between one some of the trade-offs I was agonizing over. This being my first night in it, my initial impression is that I got exactly what I wanted. The minor caveats are that it’ll be a little heavier after I switch the stakes for ones with better holding power and that setup was easier, though slightly less flexible than I expected. Either way, it made for a much more comfortable (if ~1.5lb heavier) experience.

The camp next to ours had a hiker who was clearly playing the baseweight game and I hit it off with him over gear.

It rained a little during the night but not enough to be consequential and had backed off when we broke camp.

During the hike back the rain slowly crescendo’d and was coming down pretty well by the time we were at the car. Alex, from the next campsite over, caught us and I wound up hiking ahead with him trading stories of hiking adventures. It was kinda funny since about when that happened Anda and Chris finally exhausted their conversational reserves and showed up at the car in silence. Conservation of conversation.

The ride home included a stop for burgers and milkshakes. A good end to a good trip.