Last night, fog rolled in and water drops collected on the needles of the trees over my head. As I was cowboy camped (no tent), it was particularly annoying to get rained on when the rain storm was localized to exactly my camp. I unrolled my tarp and pulled it over me like a blanket which left me head uncovered but that was fine as very few drops hit me. It was cold in the morning and the fog remained for some time which made for mystical views of some of the ridges just to the north of white pass. Things never really got that warm though I took off my gloves and jacket after a few miles. I camped with the Grey Coyotes and we spent some time around an excellent fire. I tried sleeping next to it and found that it was generally more effort than it was worth to keep the fire going as most of the heat goes up, not to the side where you lay. What does come to the side are embers an I now have a number of duct tape patches in my sleeping bag, so many that I’ve used most of the tape I’d wrapped around my trekking poles handles way back at the beginning of the trip.
On the left is dog poop, properly bagged and ready to be removed when its owner comes back this way on their day hike. On the right is horse poop. For some reason, horses are the only type of pet, after which, people don’t have to clean up. Leave No Trace ethics get preached to hikers. Why don’t riders have to dig a hole 6-8in deep and bury the feces produced by their party? Alternatively, they could be like dog owners and pack it out.

Most bridges cross steams. This one crosses an asphalt stream. Look at how pretty it is. Asphalt streams must be realky special.

Sheep Lake with some really nice ridges in the background. 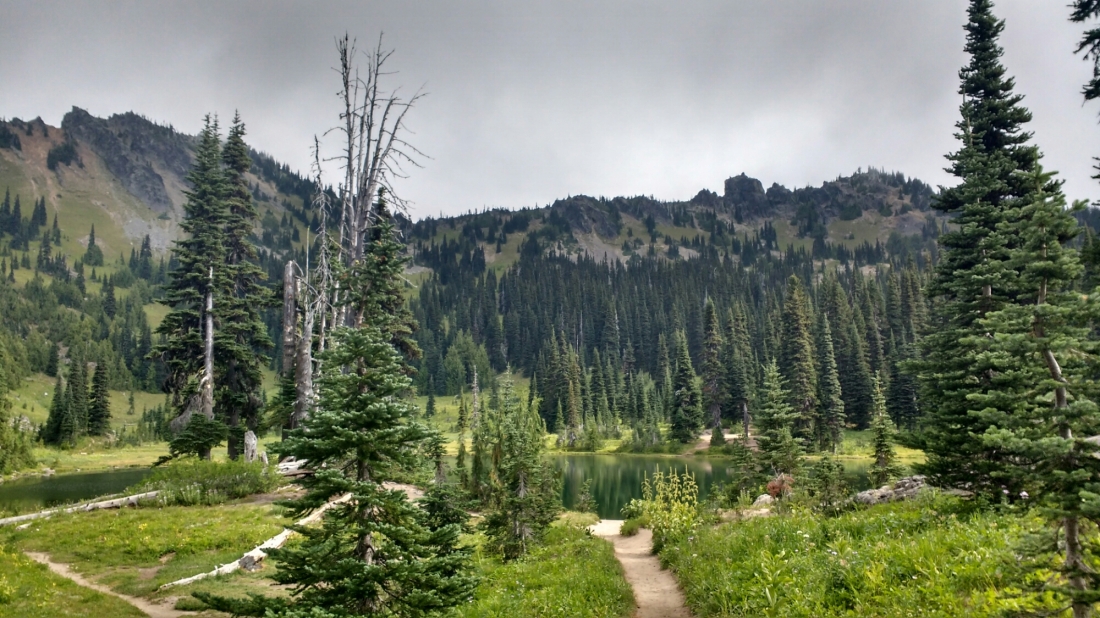 More misty mountains. One of the things that maked today interesting was how many little valleys we got to pass over on high traverses.

More of the same. I was loving it. The Ritz crackers ans Hershey’s Bar I had for lunch wasn’t quite as agreeable.

Cool mushrooms. I don’t think eating these in real life has the same effect as in Super Mario. 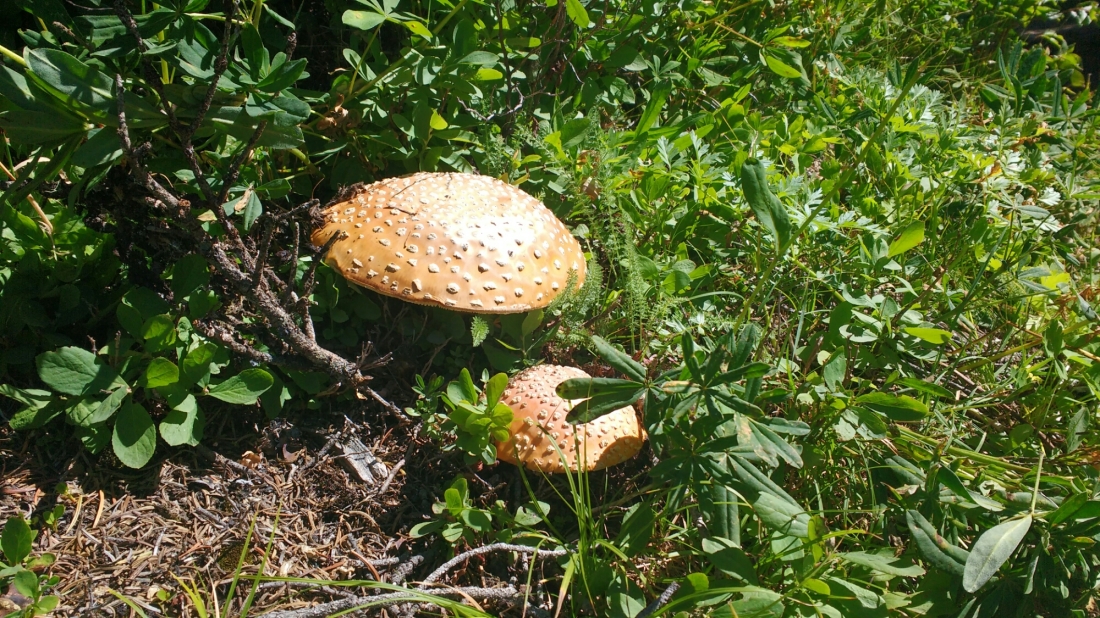 Towards mid afternoon I escaped the clouds and merely had pastoral scenery to enjoy before descending into the woods. 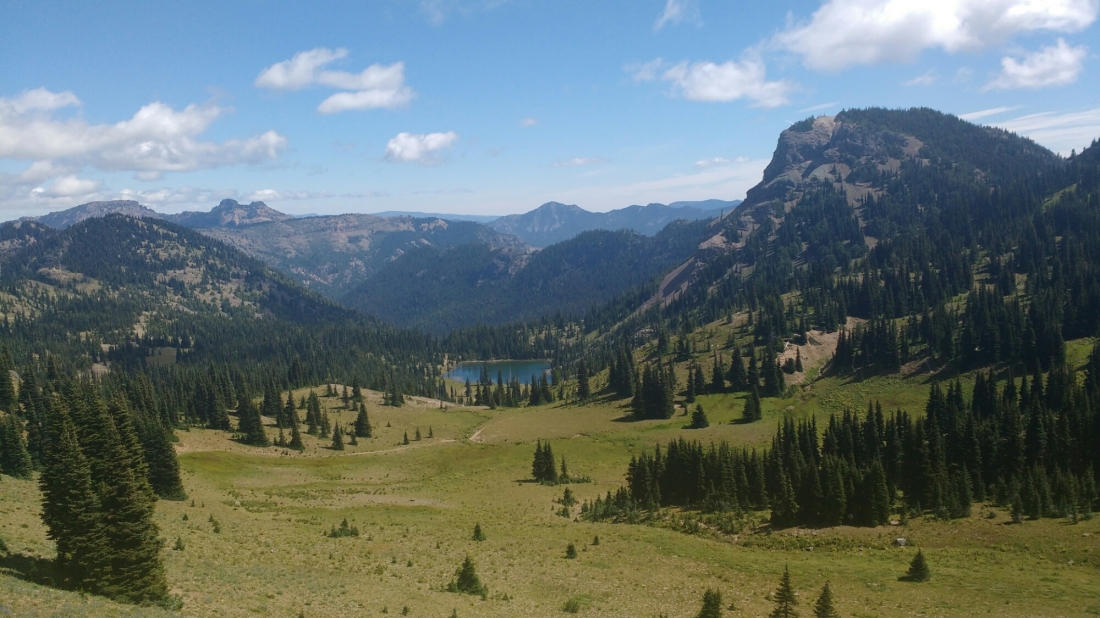 This is Jugs. Usually he hikes with a gallon jug of water in his hand. I’ve seen him on and off since the start of the trail. He’s got a high voice, simple manner, and is probably the thriftiest hiker on the trail. He carries more gear than most, in part because he doesn’t like being cold but has an incredible consistency to his hike and spends very little time resupplying. 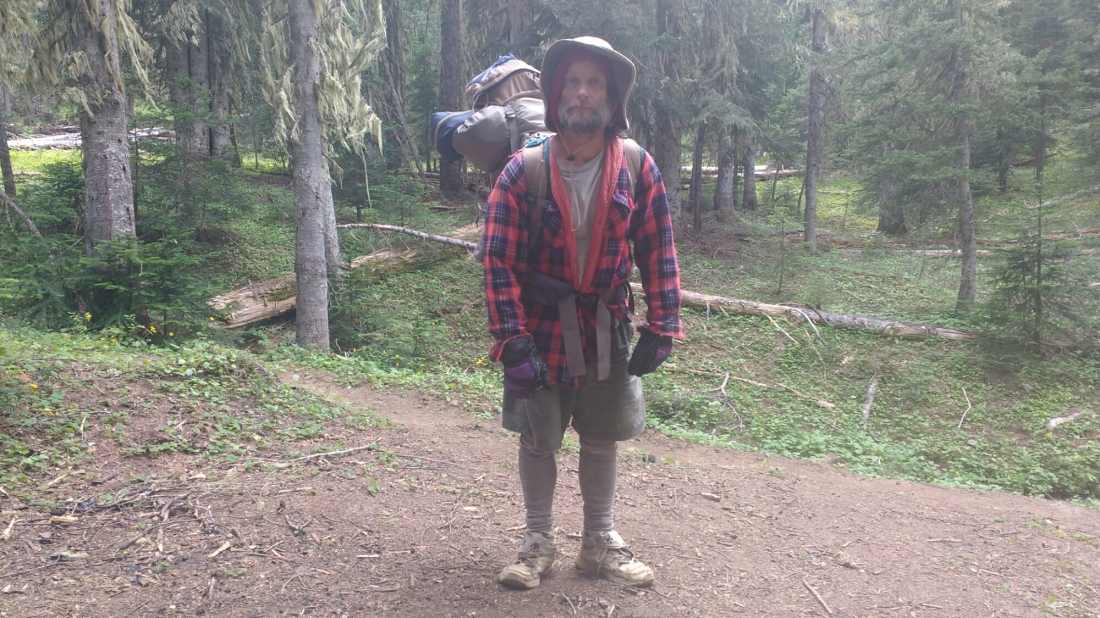