Today had even more adventures than usual.

I woke up when I opened my eyes at some point and realized that instead of stars I could see things next to me. My sleeping pad popped last night a few seconds after I tried reinflating it while laying on it. This meant I spent most of the night separated from a rock by a few millimeters of plastic. I’ve been sleeping on my backpack because of a slow leak in my pad but wanted to be up and out quickly this morning and so left my things all packed up except for my sleep system. It wound up being good that I just threw my quilt in the top and hiked because there was a lot of condensation last night and I had to leave my quilt out twice for it to dry sufficiently. 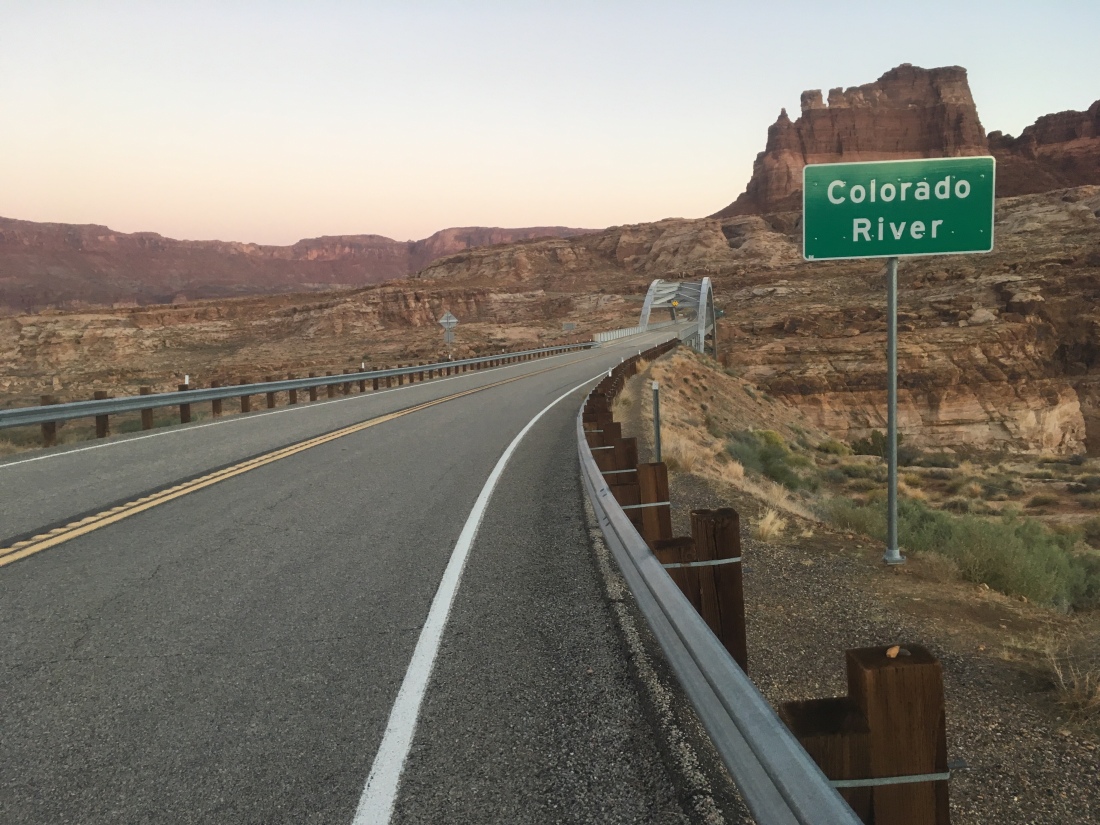 After a quick road walk and cutting up a sandstone slope, I followed a 4×4 road along the Orange Cliffs (according to a kiosk I passed). I had zoned out and missed the point where I was supposed to turn off and just follow the canyon and so had to hike back a ways. 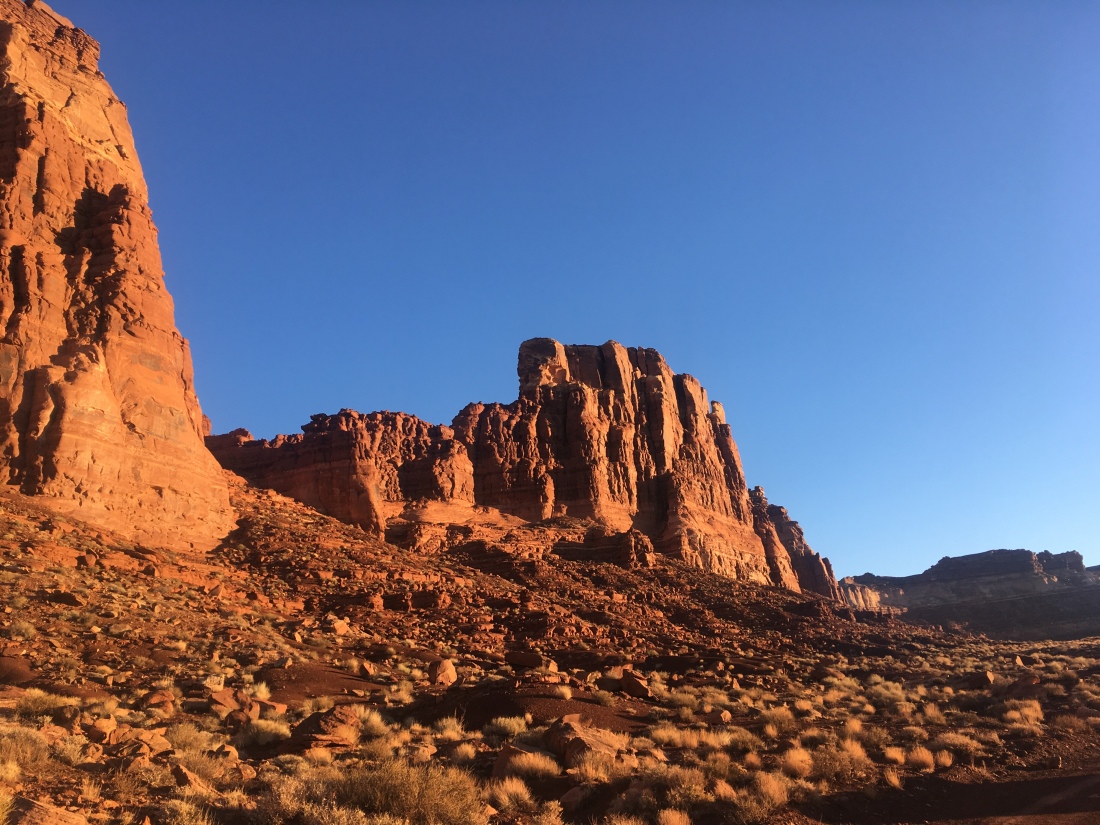 I was having a little trouble lining the map up with the narrowing canyon and so just didn’t worry about it since the next move was to exit the canyon by climbing a crack near the end. Unfortunately, when you’re not paying attention, you run out of canyon having seen many cracks but none you can climb. 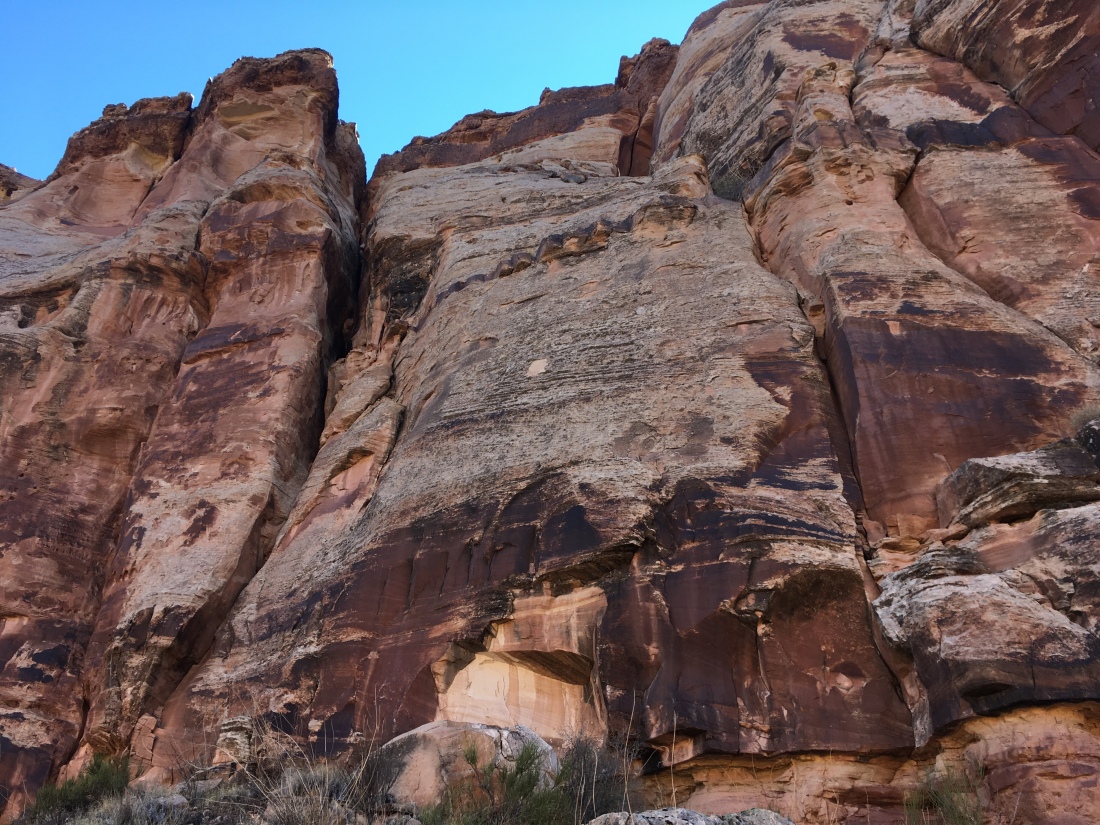 I’d actually gotten as far as examining one in detail and trying to figure out how I’d place my hand initially like a route at the climbing gym when I realized that someone who usually can’t get up a V2 at an indoor shouldn’t even be thinking about how to scale a 50ft vertical wall. With this, I started wondering if I were going to have to abandon the section, how I’d get a ride to Hanksville, etc… when I rounded the previous bend in the canyon and the exit was obvious. 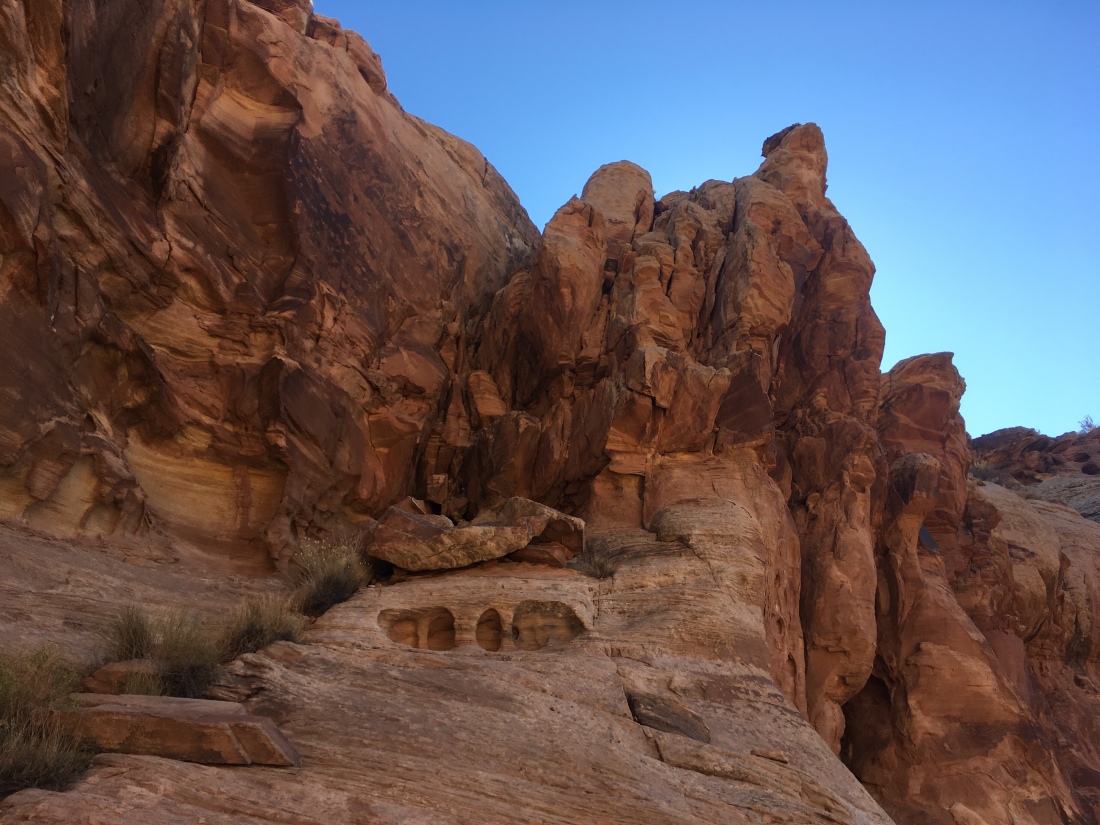 The crack is about 3x my height but the top third isn’t really a climb. There are nice places to rest after getting one and two body lengths up. This was crucial because I’d never had to haul a pack up. I knotted together some guy lines, tied it around by belt, repacked everything to be inside, and climbed up to the first lip. I had to pull harder than I’d expected but the pack came up without problem. Then then up to the second lip. Unfortunately, the pack is now directly below me. I untie it from my belt in case something goes wrong and try to pull it up. The pack gets stuck and I miss trying to set it back on the first ledge so it goes all the way back down. Fortunately, I have long guy lines. I have to yank it around a few times get the trekking poles which are catching on the underside of the rock to be oriented away and the it comes up with a few hard pulls. I was extremely pleased with myself.

From there, I had cross-country orienteering exercise. I followed Andrew Skurka’s directions instead of the guidebook route. In summary, I made three mistakes where I had to backtrack. Towards the end, I wound up relying pretty heavily on the footprints of someone who passed recently enough that their tracks were deep because of the recent rain. After a lot of expletives both from frustration and sudden insight, I wound up at the lip of Fiddler’s Cove and contoured to the entry point. 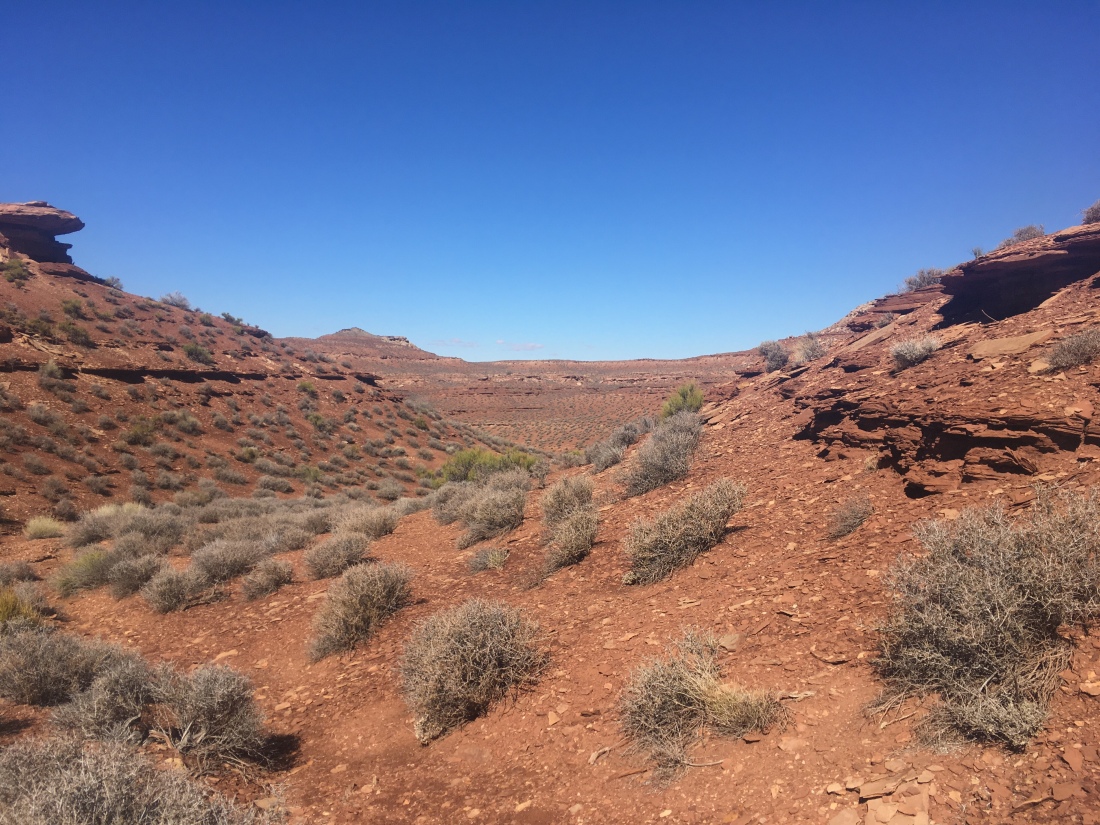 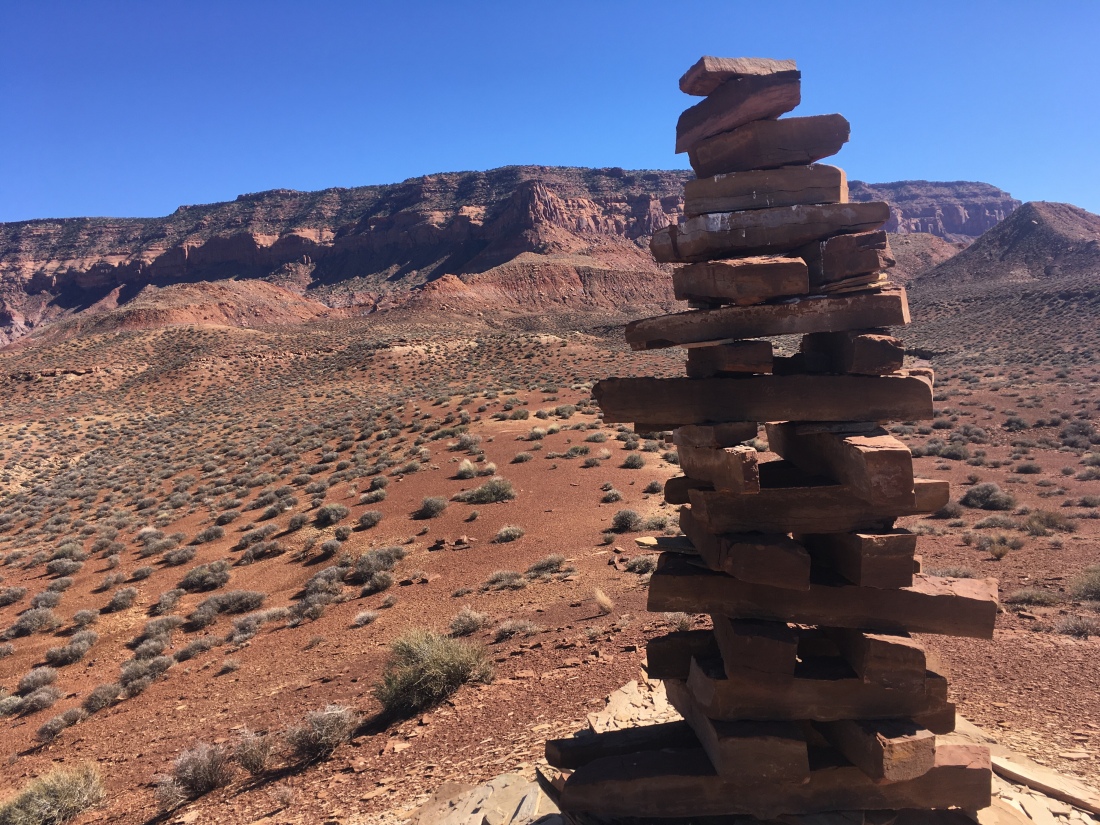 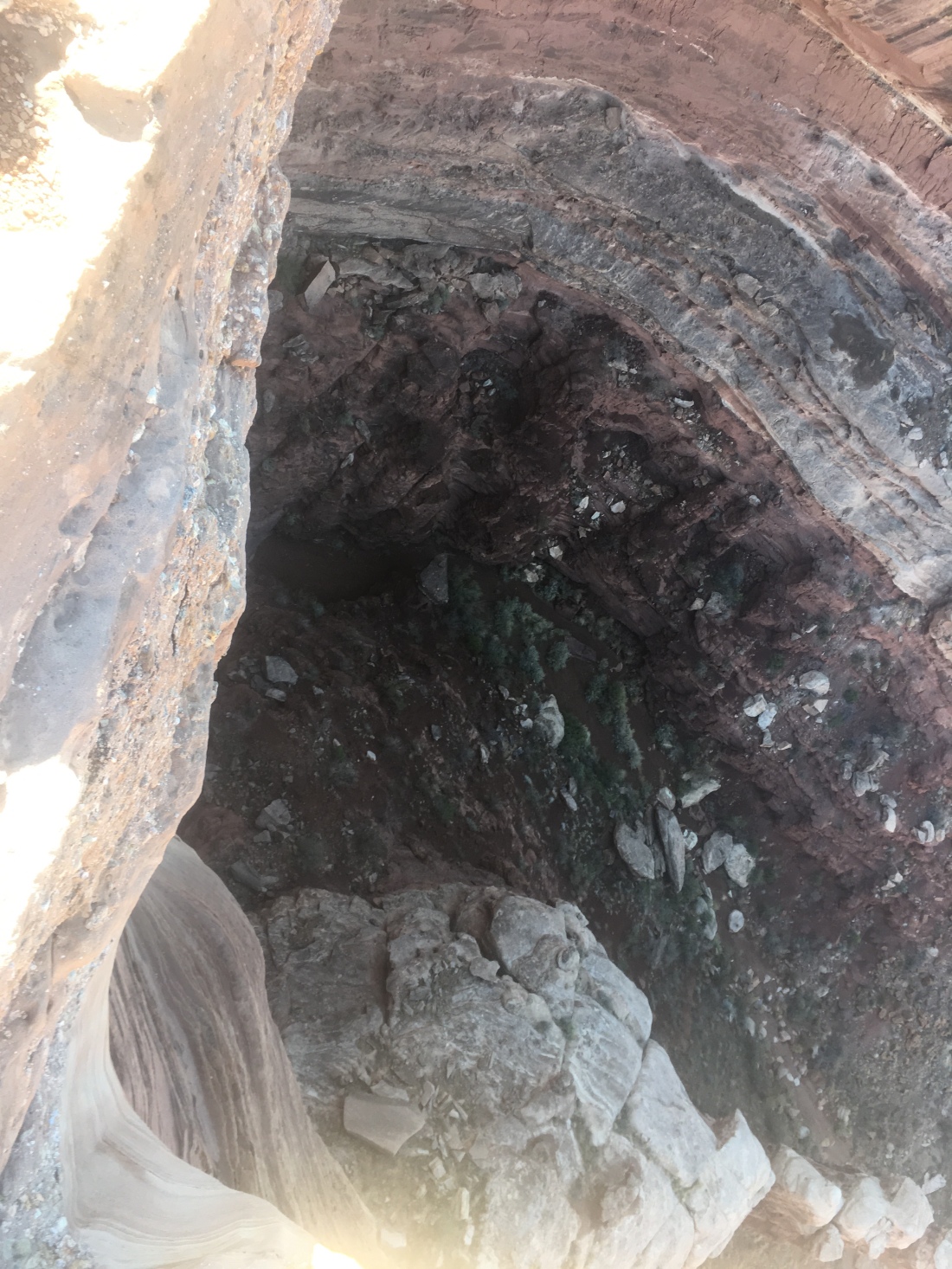 The descent into Fiddler’s Cove was exhilarating without ever feeling dangerous. It’s steep and twisted enough that you can’t see how the whole thing will go and just have to trust that it will. A few well placed cairns help you keep the faith. 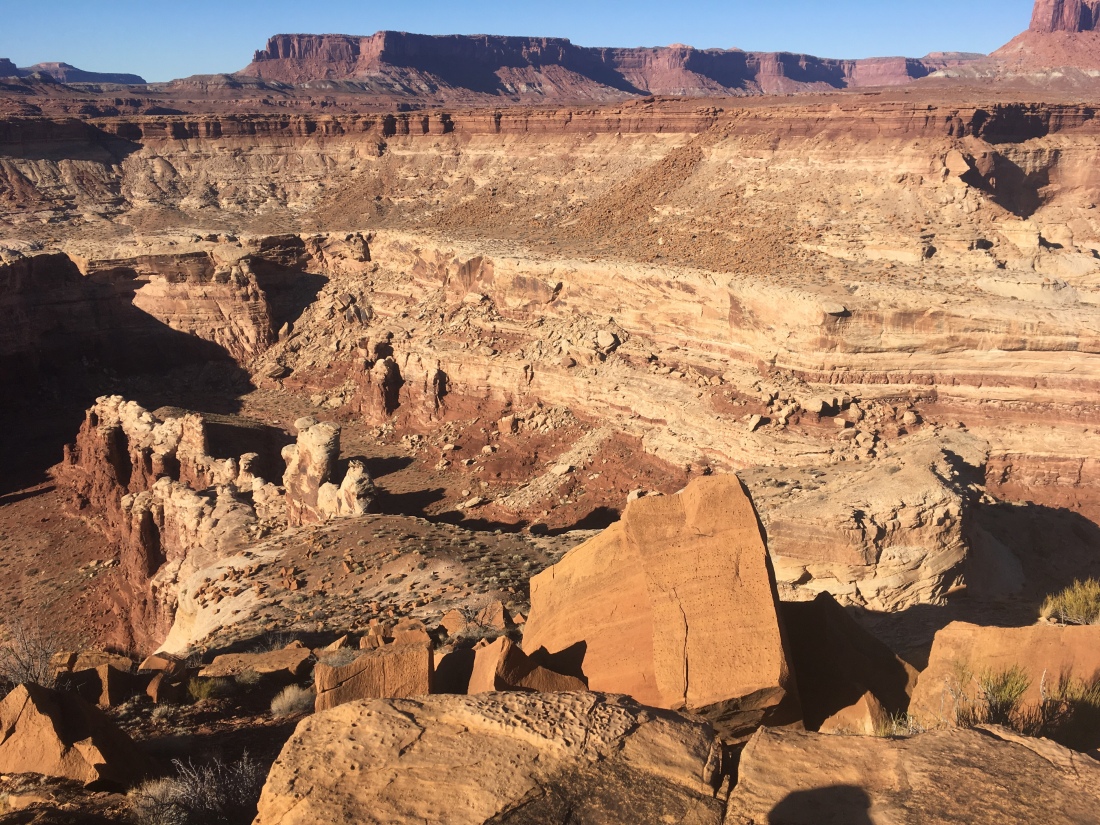 After a quick jaunt from Fiddler’s Cove to the Dirty Devil River, I ate dinner and then got started working my way up river. It’s deep enough that I have to pick my crossing points or risk getting in too deep. I like wide, fast moving water with ripples to indicate rocks. You have to cross many times because some the turns run up against canyon wall. The worst crossing so far (I’m probably about a quarter of the way I need to go) took me about a hundred yards and three attempts to find. It as mid-thigh deep with a muddy bottom but at least I didn’t have to backtrack. I’m getting better at reading the water and only stopped hiking when I went down to the bank to cross but the moonlight wasn’t enough to discern what pattens the water was moving in. 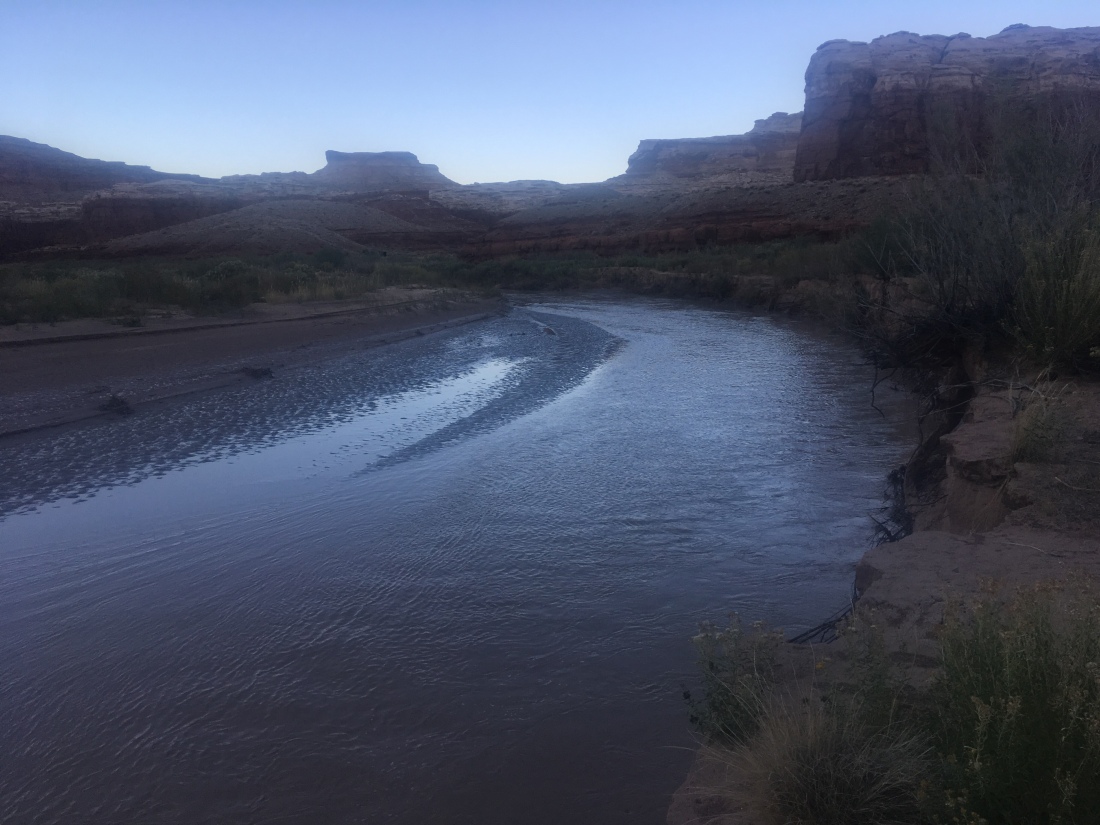 The Dirty Devil has about three sets of banks. The lowest are covered in slick mud and are at or near water level. These are bare or have thin reeds you can easily push through. The second level is semi-dry sand and has all kinds of bushes which cut up my legs as I try to get to the water’s edge. The second bank may be 6ft above water level and so sliding down then to the first bank can be fun. The third bank, usually sloping a little up from the second is dry sand and only has low plants. It’s the nicest for walking but the eye-level bushes on the second level of bank prevent you from seeing the water and so identifying a good crossing point. This makes for a difficult balance of forward progress (the 3rd bank) at the risk of having to double back to find a good crossing point or getting cut up bushwhacking through the second bank so you can drop down to the first bank when you think there might be a good place to cross.

I didn’t make it quite as far as I’d wanted to set up for getting into Hanksville tomorrow but the evening is warm and the stars are out and I’m going to sleep.