When I woke up it was raining. Today had what sounded like some intense route finding across steep canyon sides so I waited out the rain before descending into Horse Pasture.

The first thing the guidebook makes a big deal about is the climb to bypass a large pour off in Young’s Canyon. That climb really didn’t feel so bad compared to the exit from Butler Wash yesterday.

The one notable difficulty was figuring out how to get out of a chimney which I’d entered with my backpack. I wound up stashing my pack in a bush which was blocking the top so I could climb out over it, then to extract my pack had to pull it under the bush. 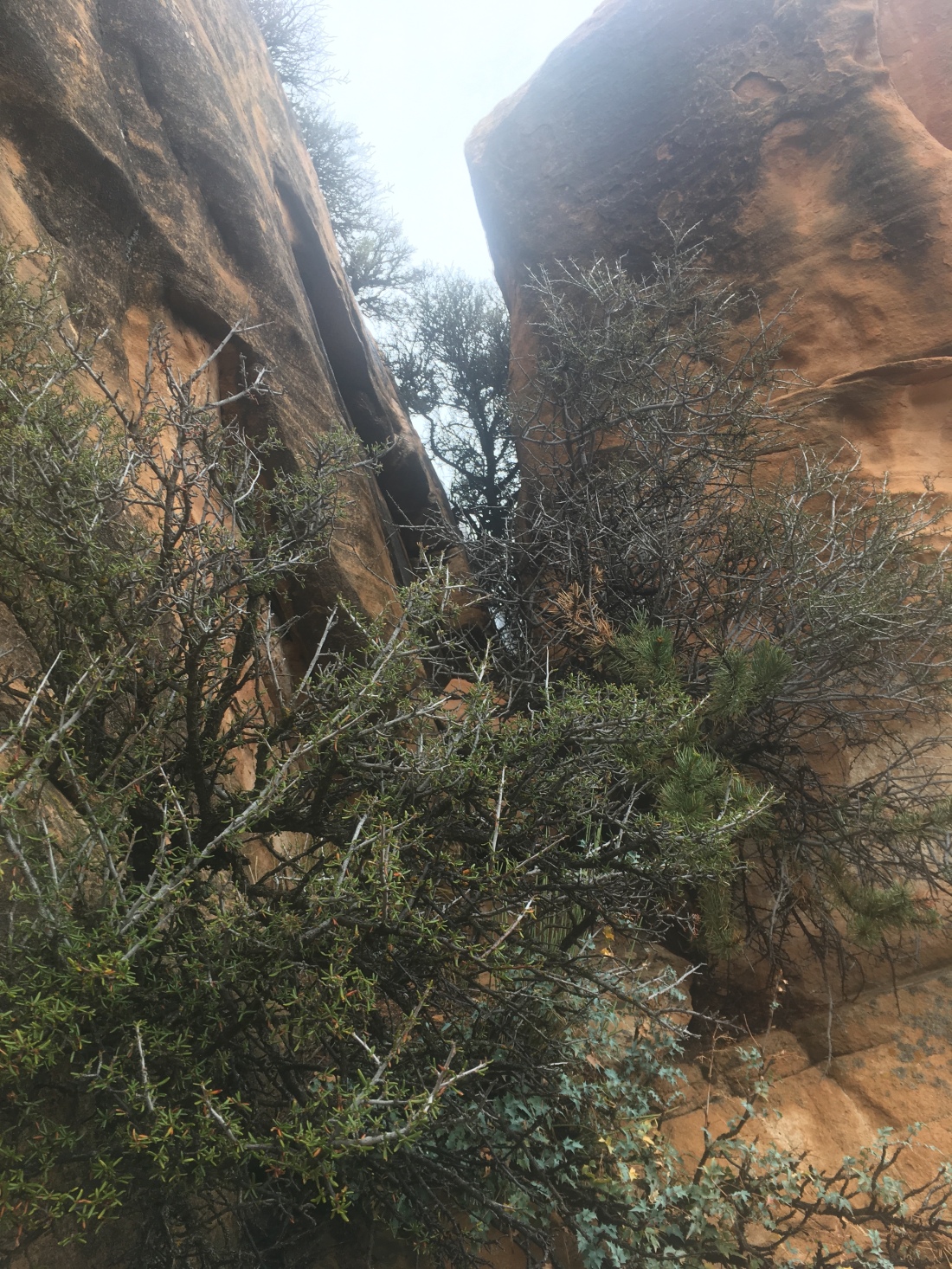 Walking over to the descent back into Young’a Canyon was an exercise in imprecision as I followed the rim, my compass, and various use trails at will. I wound up on the wrong overlook but it was an obvious mistake 1) because there was no way down and 2) because there was a beaten path to the correct overlook. The correct overlook is as far west as you can get while following the rim without starting into a side canyon to the south.

The first part of the descent would have been a disaster without the cairns marking a pretty clear route. At one point I almost didn’t make a turn because I thought I’d gotten to the bench mentioned in the guidebook when I was still above it. 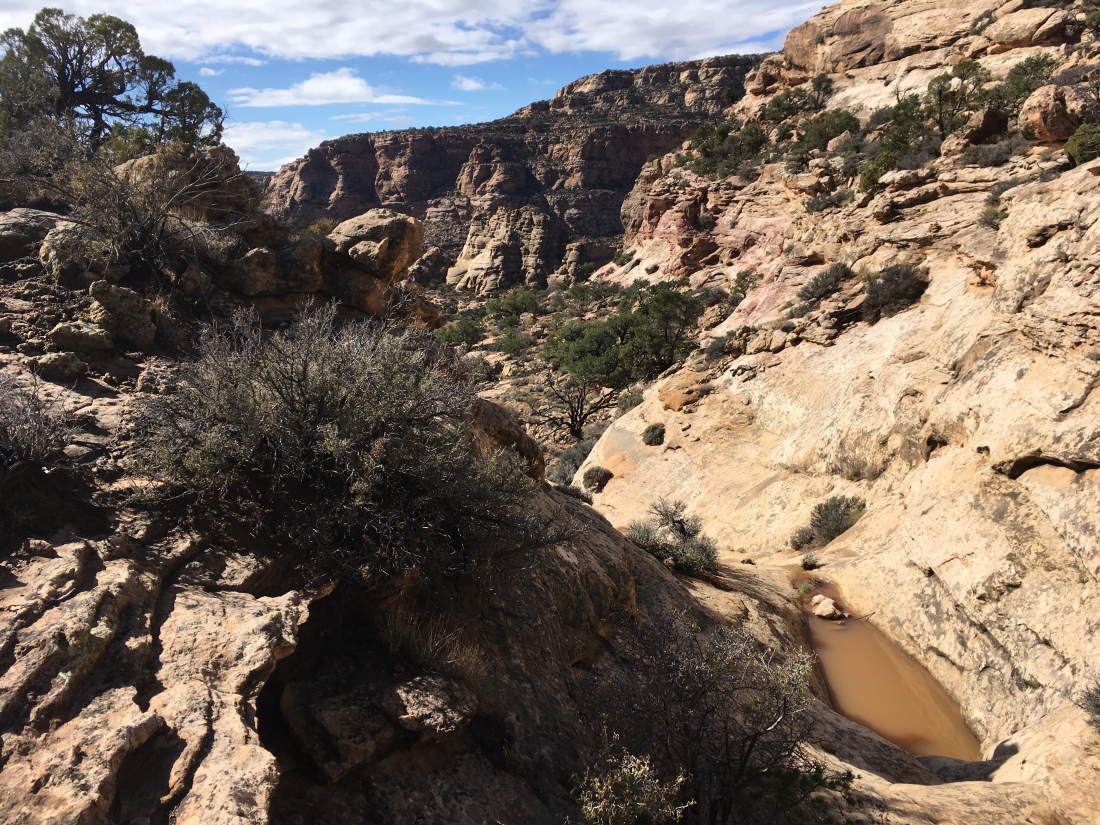 After passing the gap between the canyon wall and the “pinnacle”, things got steeper, more narrow, less obvious, thinner, more likely to slide under your feet, etc… (aka sketchy) but it was still either pretty obvious where you needed to go or caromed. This was huge for me because I probably wouldn’t even have correctly identified the start of the descent without a hint.

Back in Young’s Canyon, there was bush whacking. To avoid this, I tried to find little trails on the sides above the stream. One of these lead to a USGS marker and then dead-ended so I cut back to the canyon bottom just in time to run across the pour off which Skurka’s Supplement mentions can bypassed by contouring, descending, contouring, and more descending. So simple the guidebook doesn’t even mention it. I started the contour and at some point noticed a few sticks blocking the trail. This is the universal symbol for “the trail after this is not where you want to go”. I stepped over them because I didn’t see anything else that could be a trail. After I’d gone far enough for it to be clear I’d gone too far, I doubled back and noticed not one but two cairns near the stocks. After a few seconds of searching that this was the beginning of the next descent. The trail wasn’t immediately distinguishable from general rubble but didn’t immediately get clogged out either. It looked impassable but that was just from where I stood. This has been the big lesson today. It’s really hard to tell whether something goes. Unless it’s a vertical cliff, it might be the trail. 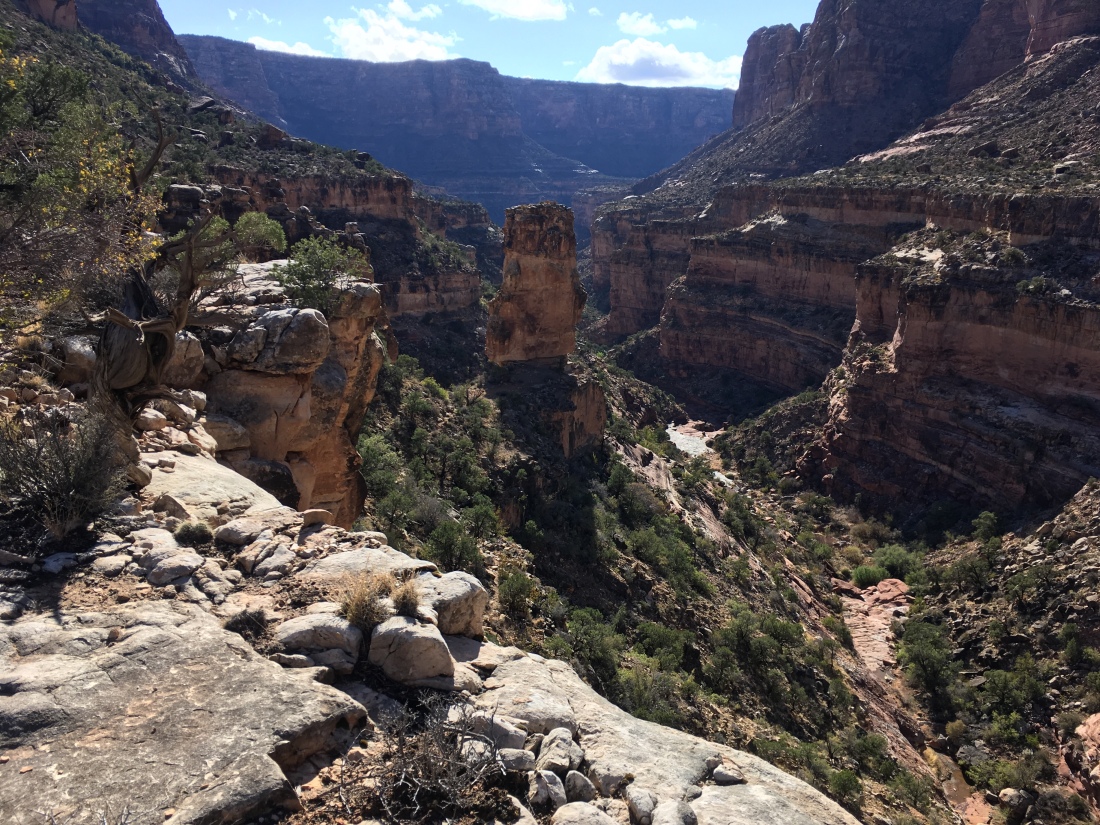 I’ve decided that the guidebook description of Lower Young’s Canyon as having a few easily bypassed pour offs is a joke because of how hard Upper Young’s Canyon was when they went through. Skurka’s description of the one bypass is probably worth the entire price of his supplement because without it and the cairns I quite possibly would not have figured out the route and certainly not before sundown. The Hayduke readjusts your sense of what is possible and reasonable.

To illustrate, at the end of Young’s Canyon just before the confluence with Dark Canyon, I had to bypass a pour off on steep rubble which overlooks a pool which looked deeper than I was tall. This ended at a small overlook where I could see two guys camping in the other side of the steam. I asked if they could see a way down. They said no but they’d heard there was one. After looking around very carefully I found a place where a few steps would get me to an overhanging ledge. This dropped off (as in I sat above it, pushed off so my pack would clear the edge, and dropped a few feet) onto one rock which dropped onto another which dropped onto the mud. Not particularly dangerous but neither rock was level or had room to catch yourself if you stumbled.

The two guys were named Dave and Josh, a father-son hiking pair with a penchant for obscure canyon hikes. We hit it off and so I decided to call it quits with an hour of daylight despite only making it 7 miles today. They shared whiskey and made a fire. Trail magic. Josh has hiked the AT in 1997 and we traded stories until the coals were dead.