On paper, today is the most logistically difficult day of the trip. The rafters I met yesterday made life much easier.

Things started by continuing the game of hide and seek with the use trail which headed south of Nankoweap. Per Skurka’s notes it does “fade” after Kwagunt Creek but it doesn’t really completely disappear except where the slope is just rocks.

Where there was sand in the deltas where a side canyon joined the Colorado, I would see familiar footprints. Curiously, in several places they seemed to be coming and going. 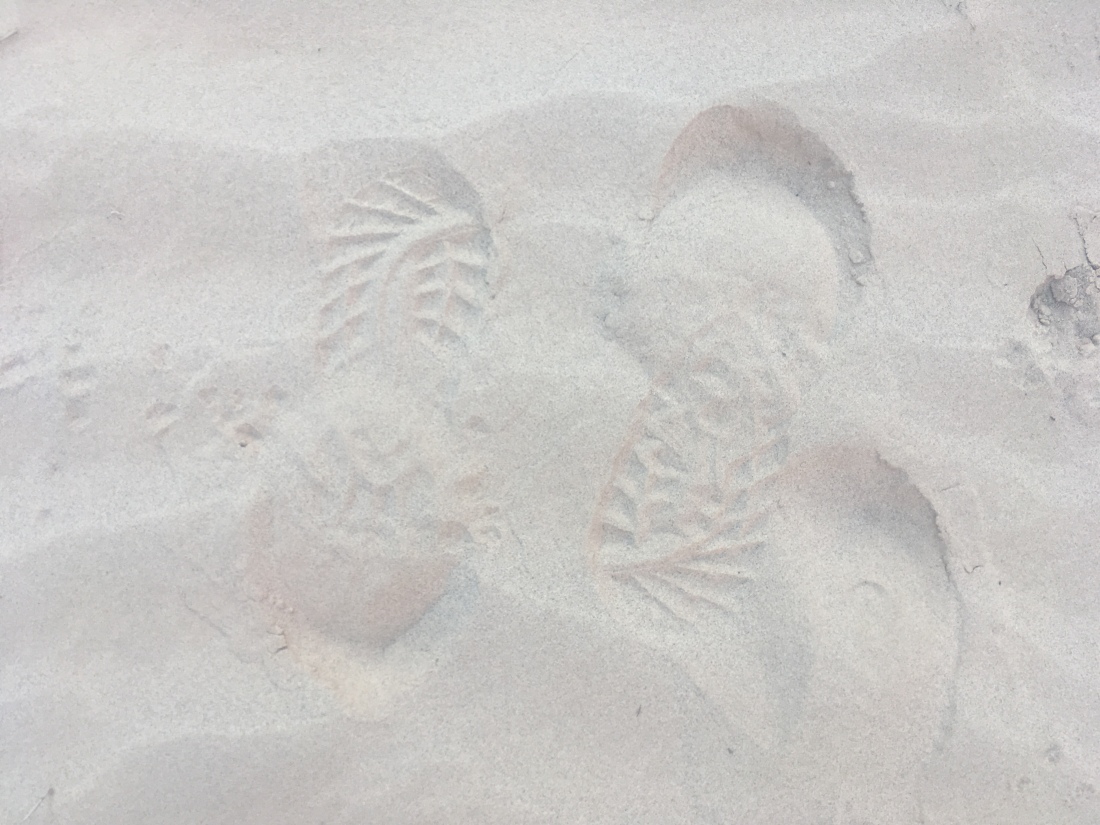 There are two spits of land which break out of the increasingly steep river banks south of 60 Mile Creek. The second is the recommended point to hitch across but I stopped at the first as the high river level would have forced me to take a more difficult and sketchy route to get to the last beach. The footprints lead to the water which means that the normal route here was submerged by the high flow experiment. There were a few places where you could make quick progress across shelves but things got harder with distance. It stuck me as interesting that I could usually see my next waypoint up to a mile down canyon. With nothing obscuring the view, it was enjoyable to feel a sense of forward progress even when the going was slow.

The wait for a rafting party was short given how long some have waited, only about two hours. It was relaxing but strange to be on trail with nothing to do. I packed away my phone so it wouldn’t get wet and let me feet and socks dry.

Eventually a rafting party appeared around the upstream bend and I watched them bump through the 60 Mile Rapids with kayaks in lead. I shouted at the kayaks that I was looking for a ride across. It was hard to confirm understanding but they eddies out south of the beach and I recognized some of them from yesterday. It seems they were expecting me as I heard someone say that this was the hiker. The rafts eddies out north of the beach and so began the first of several sight miscommunications as I tried to recommend the south eddy while they just kept waving me aboard. The raft which took me on, and gave me a beer, was captained by one of the fellows in the first group I’d run into the day before. They got me a life jacket from another raft which took a little coordination. I began to feel like a nuisance but they were extremely friendly and as we pulled out into the current everything felt wonder. Water is a very different medium job which to travel than land.

The current was fast due to the HFE and were close to the eddy near the normal drop point. The captain said it might be easiest to drop me there. At this point I brought up that my next move would be to ford the Little Colorado and if it were impassable I would have to wait for another raft. I had mentioned the need to cross both rivers when chatting with the rafters yesterday and they’d seemed open to the possibility of doing both hitches. My captain smiled and said, “we’ll get you where you need to go”. I felt the guilty delight of someone who is definitely taking advantage of a stranger’s kindness but also really happy about the outcome.

Then things went awry. I hadn’t researched the proper drop point for a hitch from the left bank of the Colorado to the left bank of the Colorado across the confluence with the Little Colorado. The NPS description of the Beamer Trail says you only have 1/4 of a mile after the confluence before the trail is inaccessible from the river due to cliffs. If we couldn’t find a eddy quickly enough, I’d be stuck as an unlisted member of the rafting crew. At the confluence, there’s a small sand island. The rafts tried to catch a difficult line to get above it which would get them near a clearly visible access trail. Two of the lighter rafts made it. I think my extra weight made it particularly hard for my paddler to flight the current enough to catch the smaller around to the far side of the island. The captain made a quick decision and we landed on the island without eddying out which impressed me as there was some timing involved among multiple people.

I got out and ran to the north side of the small island to see if one of the rafts or kayaks beached there could get me across. I had to wade out a bit so I could understand what they were yelling back but basically, the current was too fast around the top of the island to get me to the visible access trail. In my mind this was a huge problem because low cliffs which weren’t obviously scalable started immediately thereafter.

When things don’t go according to plan my instinct is to take control, made a plan, and execute. At this point, I had no idea what even might be done and had hugely inconvenienced these rafters. My raft’s captain said he’s heard one of the other rafts yelling, “ferry” and we tried to push through the bushes, currently below the waterline, on the left of the island to find the ferry raft. It was waiting for us at the bottom, its captain had me get on as the only passenger, and used the island as a buffer to get a little bit of a start on the up-and-across vector you have to paddle to fight the current pushing you down stream. The other raft which had made it around he island had spotted a slope with only a few thin ledges which ran up through the cliff band. This was the same guy who had noticed the day before that the shoulder strap stain on my shirt was darker on the right shoulder. My new captain actually had to shout to the other raft as to whether there was an eddy above or below them. There had been some discussion about if we’d have to do a “touch and go” where I jumped out with my pack while handing back the borrowed life vest. Ultimately “we’re gonna make it” overruled more complex and risky ideas and we’d launched without, to my knowledge, a landing point or plan B. What a hero.

We landed, secured the raft, I retrieved my pack, returned the life vest, and was guided to the break in the cliffs where, after a trying to express my gratitude, I began the scramble which in a hundred feet or so lead to the trail. As I looked down, the rafts regrouped in a large eddy under the trail which had been just out of sight. In an ironic twist, it appeared to have an even better slope up to the Beamer Trail. The whole ordeal with the island hadn’t been necessary.

From this point, I was on real trail again and it was great. The Beamer is known for having lots of exposure but where it does, the footing is good.

The Beamer can get sketchy but that is usually where it turns in to pass through a drainage and the exposure is less. Usually.

There was a maybe 30 foot section the trail was the width of both you shoes, with rocks on the uphill side which prevented you from leaning away from the vertical cliff face a few inches to the downhill side of the trail. Still, it wasn’t scary enough that I forgot to breathe. I just became hyper focused on my footing and motion. At one point there was a split in the trail coming out of a wash and I took the higher route because it also had cairns. The lower, parallel, route looked like it might have had the opportunity for some sketchy and exposed bits and so perhaps that’s where the Beamer’s reputation comes from.

Once the Beamer descended to the beach, I briefly had to take a high water alternate which was sketchy and exposed. With the high water, the normal trail was flooded and the bank was so narrow under normal conditions that the line of the trail on my map actually went through the water.

I wound up not quite making it to Tanner Beach that night because there was a second cliff band on the map and with 10 minutes before dusk I didn’t want to risk needing precision footing in the dark. 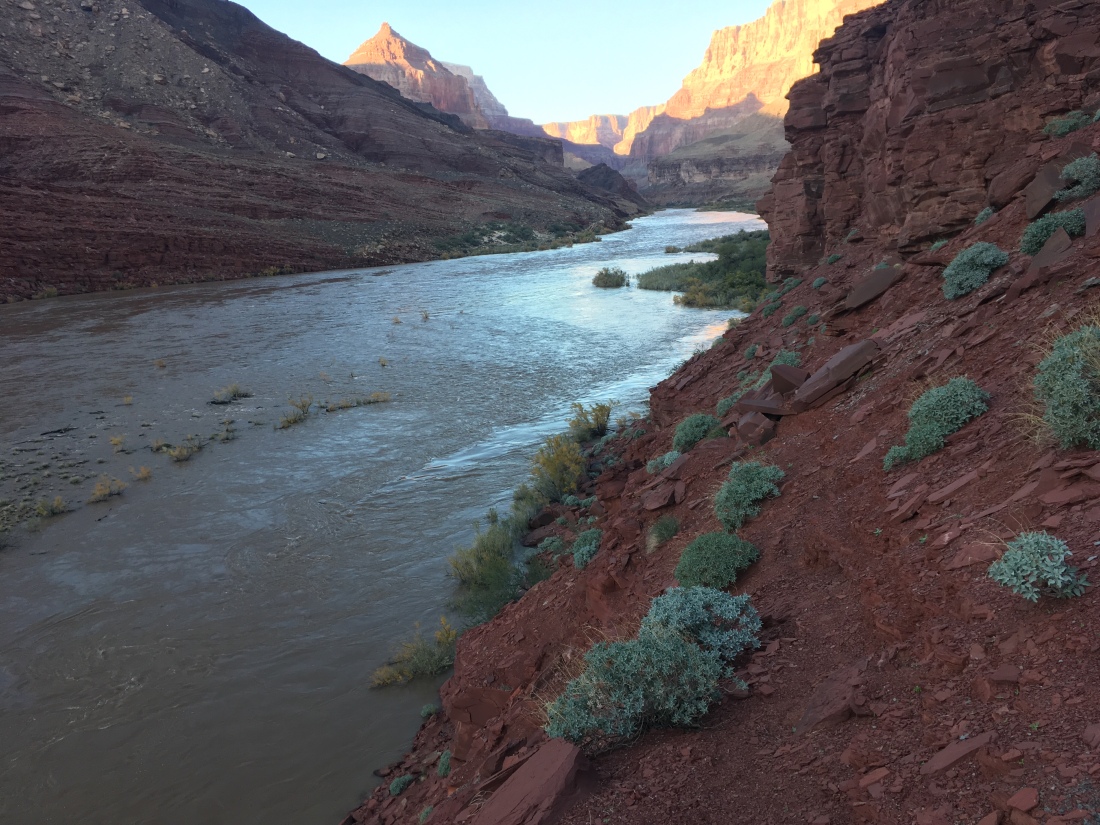