The first part of this adventure was figuring out where to park. Normally turn off I-90 at exit 45 then double back on forest road 9030 west past exit 43, gaining a little elevation as you do. In the winter, FR 9030 is probably no passable so you park at exit 43. This wasn’t completely clear from the direction on wta.org which only hinted at a “winter trailhead” but I’ve had previous adventures not realizing that FR 9030 wouldn’t be plowed in the winter and so a little research on caltopo made it pretty clear where to go.

The route I took from the wide turnout which serves as a parking lot off exit 43 was to go uphill, but no too easterly until I hit FR 9030. The only reason for this was that I followed a less distinct pair of tracks up an a small stream instead of the much wider, clearly more traveled track which would have gotten me to FR 9030 a few hundred yards west of where I eventually crawled onto the road. The tracks had disappeared and it got kinda steep at the end.

It was kinda funny following the forest road to normal trailhead. “Alright, time to start my hike” I chortled to myself having clearly already started my hike. 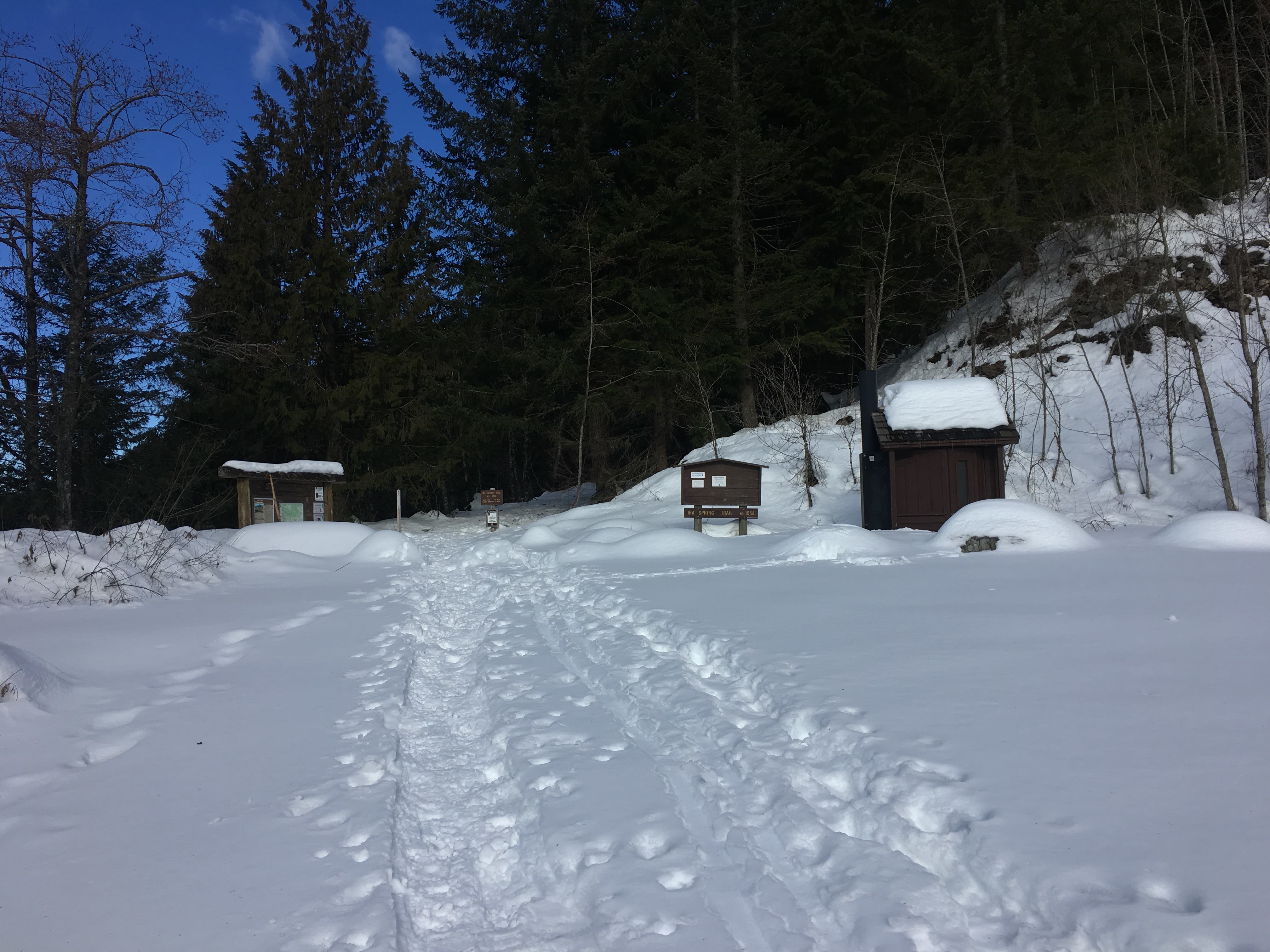 The “winter route” to Mason Lake is supposed to follow a tree covered ridge straight up above the lake. This avoids the avalanche risk posed by the summer route which switch backs up an open rock field now covered with several feet of steeply angled snow. The problem is that I’d never been this way before and the turn-off up hill into what turns into the ridge isn’t very distinct where it meets trail. I’m distinctly aware that streams on a map don’t always align with streams in real life and so it was with great relief that I encountered a man coming back from Mason Lake who said the turn off was just past the bridge (a well known landmark) and hard to miss. However he also said that there were two routes and that the one by the gully was sketchy. Just stay right he said. This being my second real snowshoe and first solo or overnight snowshoe, I really hoped it would be that easy. 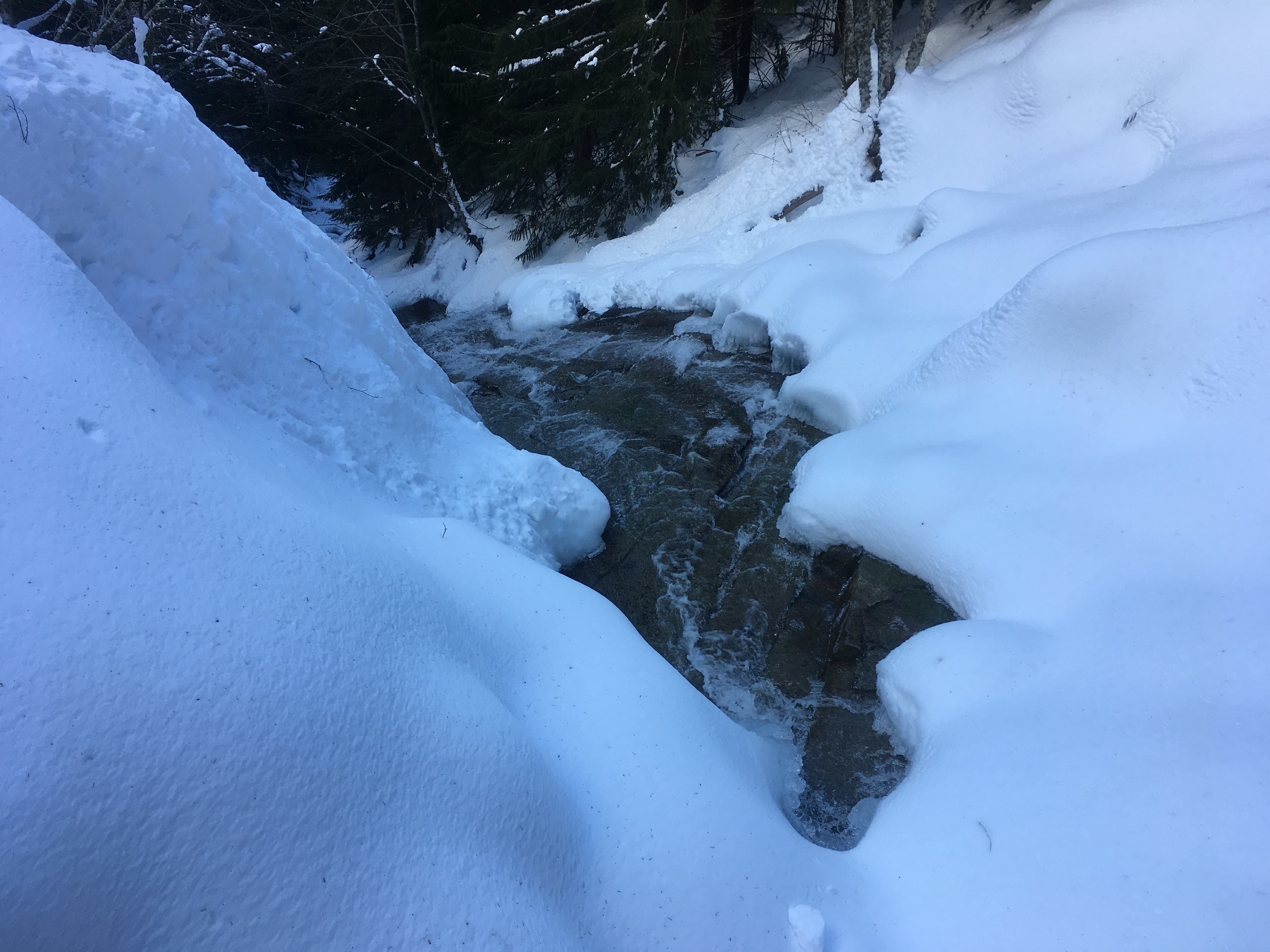 The turn-off was easy to find though I wasn’t immediately confident that there was far enough east to be sure I wasn’t going to end up in the gully. Instead of following the tracks which appeared climb west, toward the gully, I followed a glissade route straight up figuring that if I was going up the way someone had come down that I couldn’t get too lost. This was a great deal of fun. In the summer you don’t really get to go straight up steep hillsides unless there’s snow on the ground. Erosion and all that. In the winter, you don’t even mind that it warms you up.

A clear nose of the ridge began to form and then narrow. The slope lessened a little. I avoided two obvious opportunities to traverse left in favor of continuing up. On my map, the route was supposed to traverse under the top of the ridge at some point but a couple on their way down seemed to say that it walked the very top. The glissade chute gave way to a little zig-zag track which eventually dodged around a small stream then made a final push onto… the very top of the ridge. 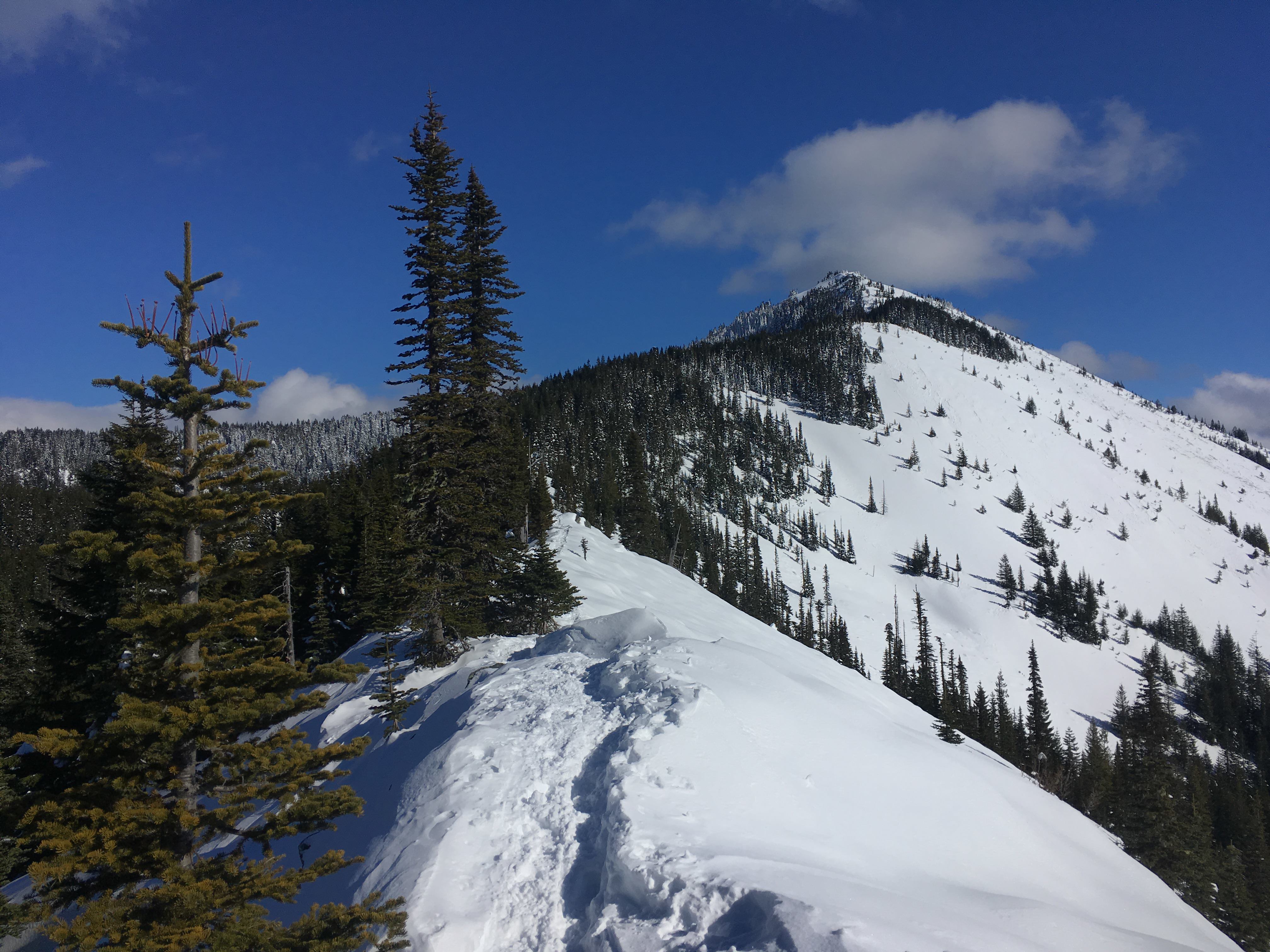 It was a beautiful day. Having been here many times in the summer I now had my bearings again. I walked the ridge for a bit, enjoying the opportunity to walk a line which, with snow filling in between the large rocks, was comfortable and easy now but impassible in the summer.

I stopped for lunch just before the turn-off down to the lake and was passed by a couple moving surprisingly quickly on their snowshoes. Guess I’ve got a lot to learn. It was also comforting seeing so many people on the track. These weren’t going to Mason Lake but I wasn’t going to be as far from people as I’d thought going into the hike.

Dipping off the ridge toward Mason Lake requires traversing a steep slope which in the summer is a narrow trail. Unfortunately, snow doesn’t build up evenly under snowshoes and even though I was following track, they were now single steps instead of track and usually banked outward. The traverse wasn’t high but I didn’t like the feeling that mother nature was trying to push me off at a particularly vulnerable moment. 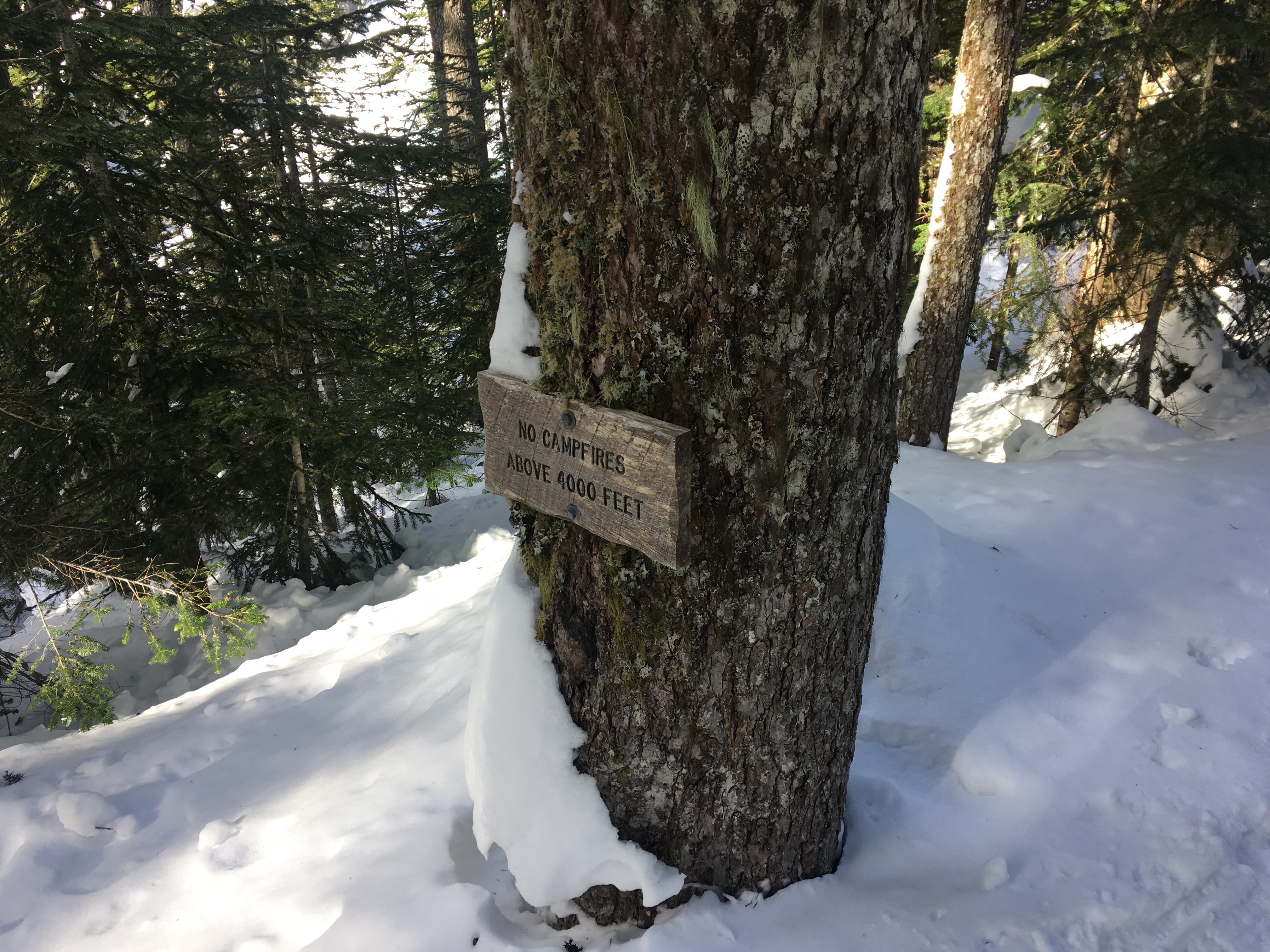 Once at Mason Lake, I only saw one pair of snowshoe tracks. I guess the lake itself isn’t such a popular winter destination compared with the ridge above. It was so fun seeing everything I recognized from summer under several feet of snow. 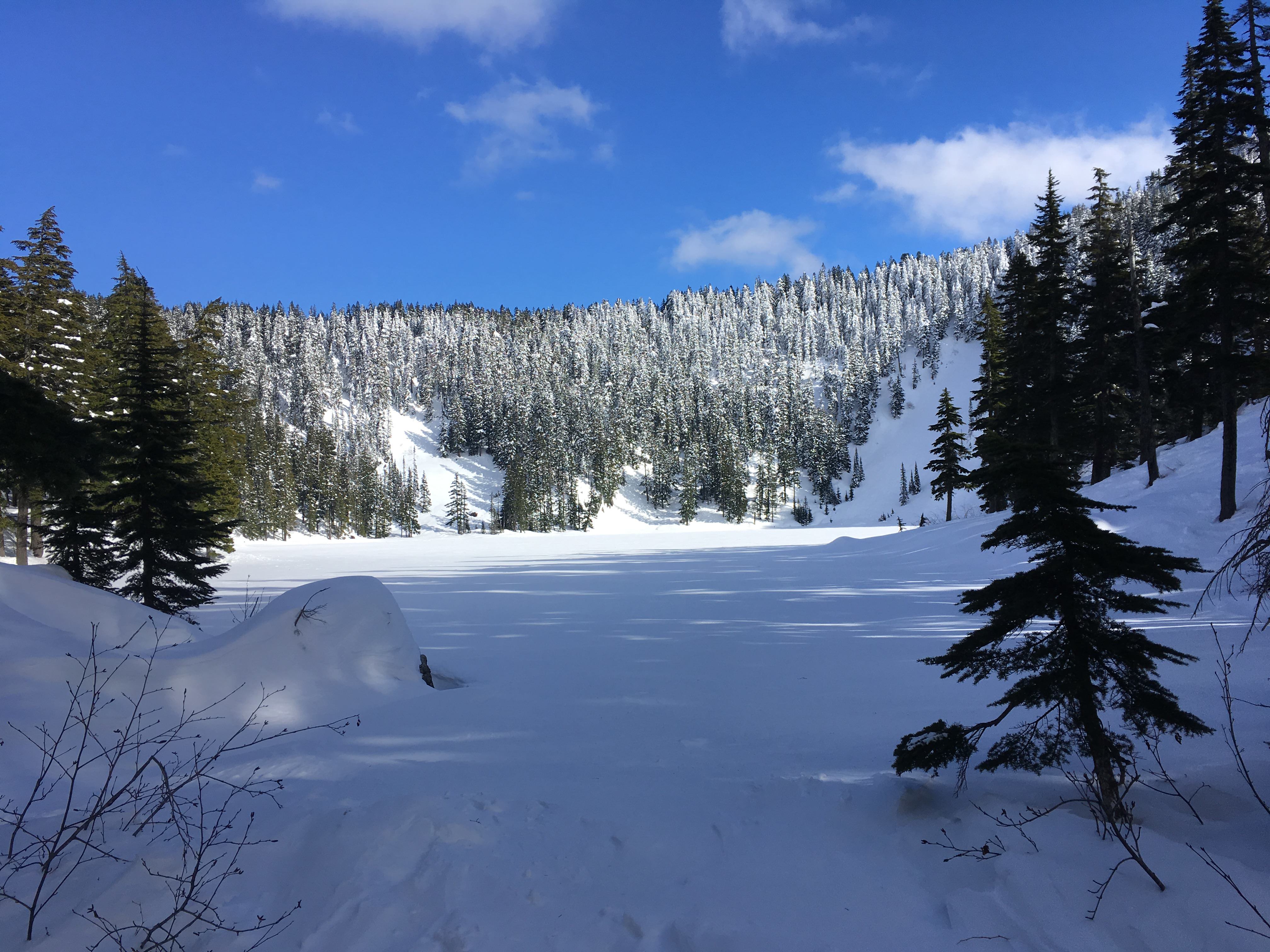 I only have a three season tent and so wanted to find a sheltered spot. Wind was coming in the sloping snow-dunes seemed not to provide any sharp walls to hide behind. I found the flatest spot I could and put my pack shovel to work widening the site after stomping it down to provide a solid surface. 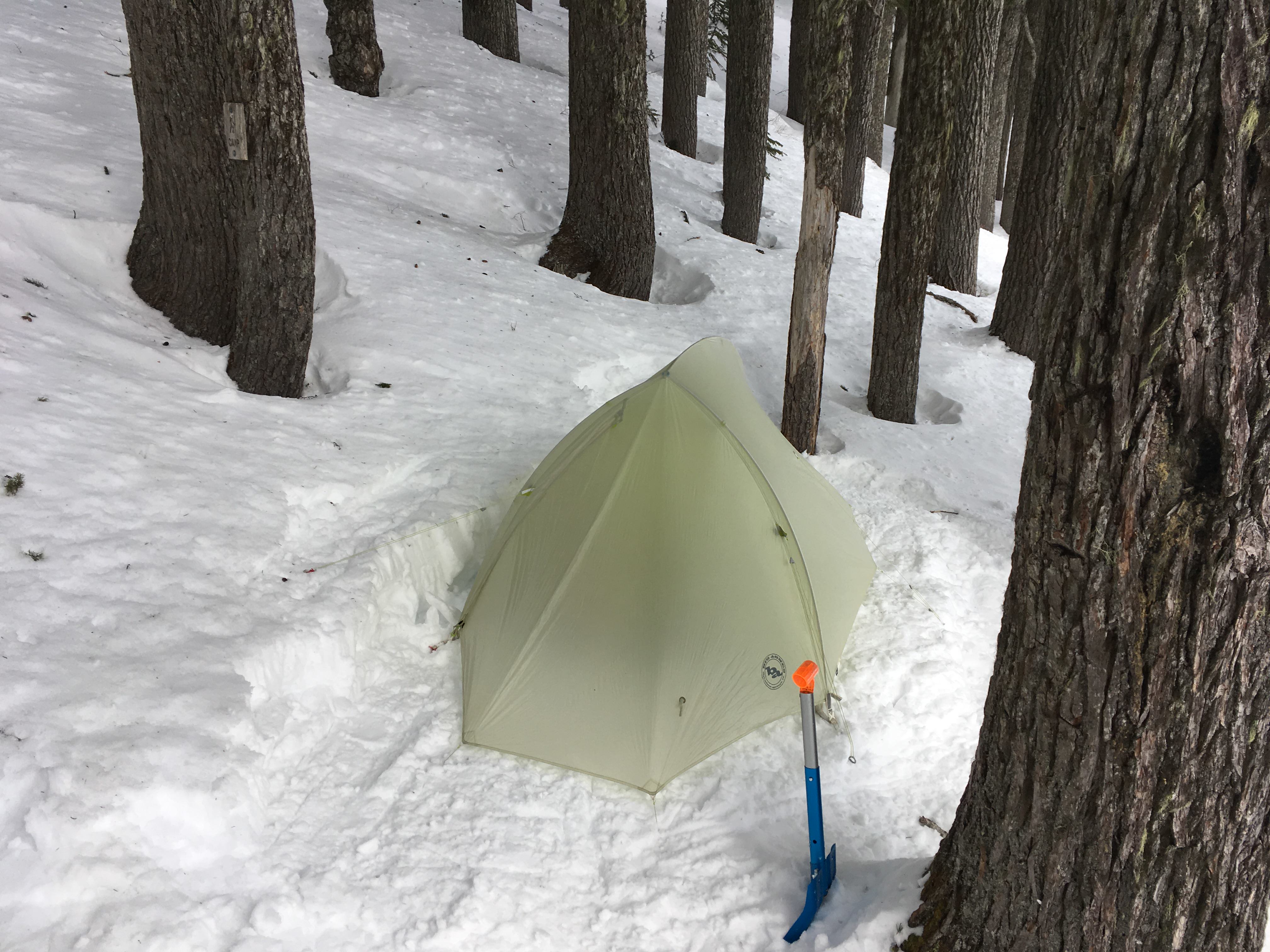 I had to sleep with my water bottles inside my sleeping bag to keep them from freezing. Unfortunately, I’d discovered that the caps on these bottles weren’t completely watertight and so had to be sure that they were always standing up. This made rolling over in the middle of the night quite a process.

In the night, the wind shifted and came at my tent from the exposed side facing the lake. I’d forgotten to attach the velcro strap which connects the rain fly to the spine of the tent and so the tent would lean over pretty far. Initially I wasn’t sure if a stake had pulled out but since the tent would pop back up after each gust, I decided to burrow a little deeper into my sleeping back and keep my eyes shut. If I can’t see it, then it’s not actually happening, right?

I’d slept in most of my clothes and so getting up the next morning was relatively easy. Still, I’ve got to do some research on how people stay warm while breaking camp. By the time I was in motion, my finger and toes were cold enough that reheating them would have been a priority if hiking wasn’t going to warm them up anyways.

The hike out the next day was quick and easy. I didn’t do any glissading myself since I was wearing expensive, thin rain pants as an outer shell. I guess you know your stuff owns you when you skip out on having fun because your stuff is too expensive to break.

All in all, a great first winter camp. I need to up my insulation game, particularly around the hands and feet in the morning but also all up when stopped. I’d tried to treat this as “three season but a little colder” and had needed to get in my sleeping bag while making dinner to keep from getting too cold.