This trip is the first of two weekends I set aside this summer to do fun, simple, easy trips. The kind of thing that friends who aren’t inclined to describe their ideal weekend as a “sufferfest” might enjoy. One of my goals was to justify the money spent on a flatwater packraft which I hadn’t used for it’s original purpose and so somehow wanted the trip to involve a water crossing. My original idea was to hike up one side of Ross Lake then paddle a short distance to one of the islands in the middle. The next day, we could come back the other side. Unfortunately, Ross Lake is over 40 feet below it’s normal depth and the islands are closed to overnight use. Back to panning around Caltopo looking for large blue splotches….

What I eventually spotted as a pair of lakes just west of the Enchantments. The Enchantments are an incredibly beautiful mainstay of the Washington hiking scene but also incredibly high traffic. The blue blobs on the computer screen in front of me, labeled Upper and Lower Klonaqua Lake, appeared to be accessible via a trail at the very end of the road and so I hoped they might be one of those places the crowds never quite got to. Why drive the extra half hour if you can go to a bigger, better known attraction on the way? A relative dearth of trip reports on wta.org seemed to support the notion.

The plan was to hike up to Lower Klonaqua Lake, inflate the packrafts, paddle across, deflate the packrafts, bushwhack up the outlet stream from Upper Klonaqua Lake, reinflate the packrafts upon reaching it, and then paddle to some place on the other side for camp. One friend signed up for expedition (I’m still learning that inviting people by adding them to a Facebook event has a pretty low conversion rate) and bought an Intex Explorer, a cheap pool toy which is perhaps better matched to the professionalism of this outing than the Supai Adventures MatKat whose price tag I was justifying.

Anda picked me up after work and we drove several hours over Steven’s Pass to the trailhead. The was sun beginning to set as we pulled in. There were a surprising number of cars and even a pair of women hanging out in camp chairs, apparently planning on sleeping at the trailhead. Anda had done more research than I and discovered that there were campsites one mile in, near the confluence of French Creek and Icicle Creek which I guess explains the popularity. In hindsight, there are also a number of connecting trails making this a great start for point-to-point adventures.

We walked the relatively flat mile through the dark until a spur trail looked like it might turn off to a campsite. On the way, we had a minor disagreement over when to turn on headlamps. I like to keep mine off to experience hiking by moonlight as long as possible. Anda preferrs to turn her light on before dark so she can see where to put her feet. There was no disagreement that we needed headlamps to find a campsite. The first campsite was occupied but the spur trail appeared to go through and so we skirted it only to find it was for water access. We tip-toed back to the main trail to find another campsite. What we found was a spacious, well established site on the high bank of the creek which made for excellent camping. While I didn’t realize it until the next morning, horses like it too. I guess even with a headlamp, I’m not that observant.

Anda isn’t a morning person and this was to be a camping (not hiking) trip, so I had breakfast and enjoyed the creekside vista for a while. Eventually, I decided 9am was late enough and whispered morning salutations and exhortations at her tent door until I heard stirring inside. The white noise of an active creek makes for restful sleep. I might have been up first but I certainly hadn’t been up early.

The trail crossed a bridge then went for some time at a shallow rise, usually in the shade. We collected water at one of the several rivulets which flowed across the trail. Nearby, we saw the largest toad I’ve ever seen. It was well camouflaged and if it hadn’t jumped out of our way, I probably wouldn’t have seen it at all. Later, some horseback riders came past. I’m not familiar with horse-hiker etiquette but their bigger than I am so I stepped to the side. The lead rider told me to say something to the horse. I found this curious. Maybe it was to let the horse know I was a friendly human and not a predator. Shortly thereafter, we saw the horseriders coming back. I’m not sure what their destination was since they couldn’t have gotten very far and there was nothing notable a short distance ahead.

Eventually the trail split and we took the less maintained fork steeply up. While easy to follow, I think a less experienced version of me would have found it incredibly exciting to hike a trail which felt so rarely traveled. We conversed to keep our minds off the climb but the elevation gain was well within the range of a typical day hike in Western Washington. First the sky began to appear through the trees. Then you could see where the terrain was going to start leveling off. Then, quite suddenly, we were at Lower Klonaqua Lake, and it was still a reasonable hour for lunch.

The lake was quite pretty. You should see it for yourself. We inflated our boats. I used Anda’s hiking boots to keep mine close to shore. One hiking boot in the boat, the other on land, and the long laces tied to keep them together. My boat is less than two pounds so it wasn’t going to pull her shore-bound hiking boot in.

I’d only taken my packraft out once and this was Anda’s boat’s maiden voyage so we spent some time getting used to paddling around. I ate lunch in mine. It tracks very poorly and will enter a slow spin if not constantly attended. While annoying if you’re trying to make headway, it was a convenient way to enjoy the views. 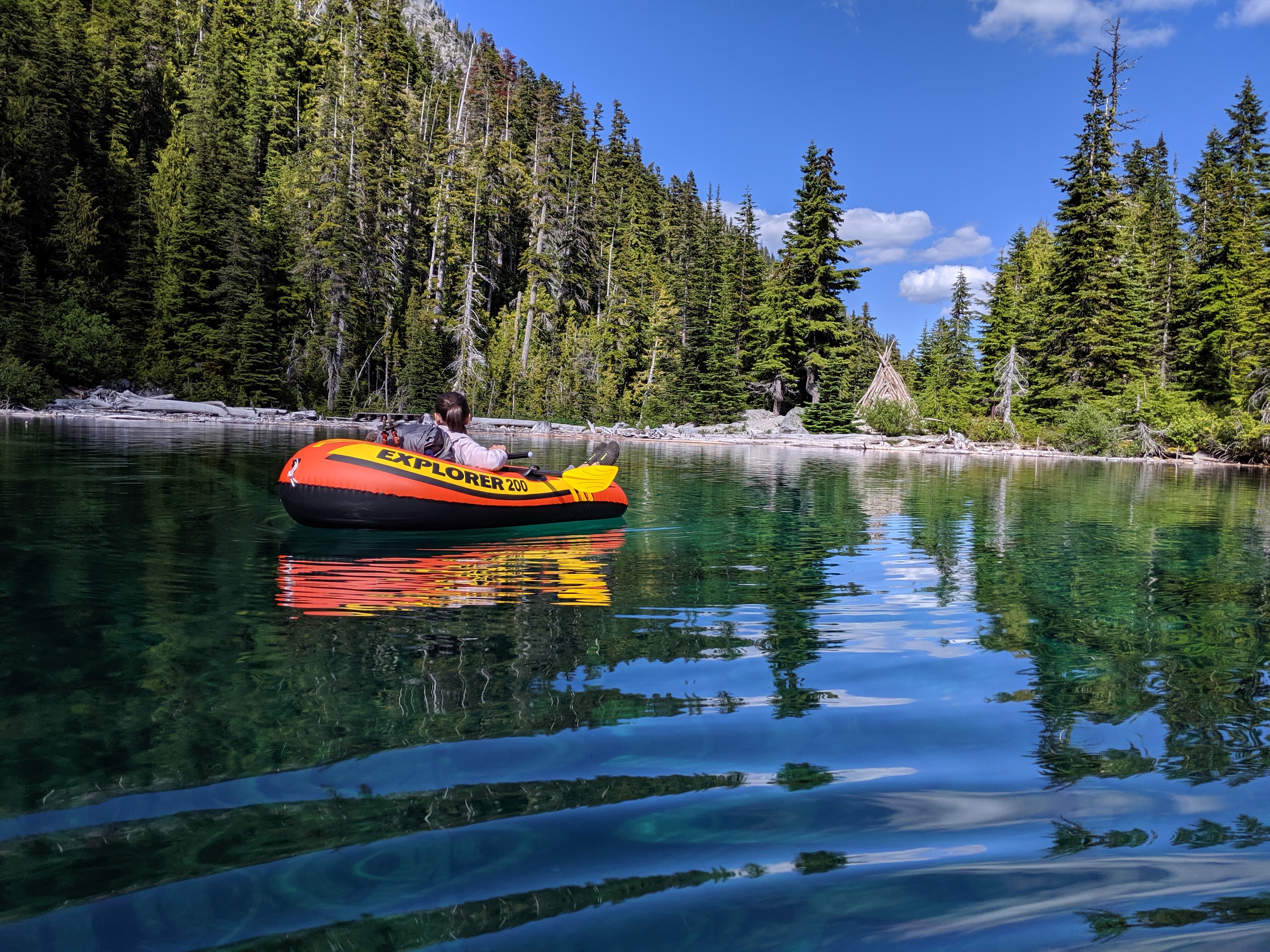 Over lunch in the packraft, I scouted a little island (not really big enough for camping) and then spotted the outlet stream from Upper Klonaqua Lake. Back on shore preparing to cross, I was a little worried that the outlet stream seemed to be the final stage of a very long, high water course coming off the distant granite ridge. Upper Klonaqua hadn’t seemed that far away or that high when I’d looked at it on a map. Anda pointed out that I was looking at the mountains on the far side of Upper Klonaqua and that our destination was just on the other side of a low rise of trees, so small I hadn’t realized that it could be hiding a lake.

We paddled across Lower Klonaqua Lake. This was my first experience making part of a journey in a boat that I’d packed in. No longer would bodies of water (at least flat ones) be a barrier to my travels! It was a glorious experience, never mind that my sloppy paddling technique keep getting drips in the boat.

There were a few possible take out points but none of them ideal. I picked a rock where I could throw my pack out of the boat to give me some room to get myself out. It was too steep to effectively beach the raft and a little deep, even if I’d wanted to get my feet wet (isn’t the point of a boat to not get wet?). The process lacked grace but I stayed dry and despite its best attempts, my boat didn’t manage to float away. I had to pull my stuff uphill about ten feet to give Anda room to undergo the same clumsy process. It didn’t help that the bank was steep and crowded, but it did make it feel adventurous.

The bushwhack to Upper Klonaqua Lake was short and steep, probably just 100 yards. There’s a trail we could have taken if we hadn’t paddle across the lake and coming across it at the top of the barrier ridge which contains Upper Klonaqua gave that same exhilarating sense of being found as when rediscovering a trail after being lost. During the bushwhack I found some flagging tape on a tree. This almost always happens when I’m off trail; there’s really just no getting away from signs of human passage.

Upper Klonaqua Lake had a feeling of petite grandeur which was a nice reward for the petite expedition we’d undertaken to reach it. It took several minutes to find a campsite. There’s some multi-trailing and we encountered a tent but no people. The banks were thin and rolling. While this limited camping, it offered the illusion of privacy and seclusion.

We took time making dinner, trading off who got to use the stove. I sat in my camp chair and read facing out through a gap in the trees towards lake. With light still in the sky, I turned in to enjoy the comfort of my tent and coziness of my sleeping bag. Most of my trips focus on light, fast, travel. I usually wake to predawn birdsong and string up a tarp in fading light. I wasn’t completely sure what to do with myself without the prime goal of forward motion undergirding every action.

It was another easy morning. There had been enough adventure the previous day so we hiked back instead of rafting. This took us by Bob Lake and connected back to the trail down to French Creek a trail split I hadn’t noticed on the way up. I guess the trail is a little rugged. Maybe that’ll help keep it less impacted. This part isn’t on CalTopo so I didn’t even know it existed.

We made good time but Anda’s feet were hurting so we stopped at the confluence of Icicle and French Creek so she could patch things up for the last mile. There was a friendly couple camped there testing out their gear for the upcoming season and it was fun to regale them with the story of our adventure. Feet having been put back together, we marched back to the trailhead in time to hit up the 59’er Diner on the way home.

What I learned from this trip is how many low traffic gems are hidden away in the Cascades if you’re up to take a less beaten path and aren’t trying to make a high mileage weekend.