I was going to say that I started today by getting lost. Technically, I managed to leave Yosemite National Park first. 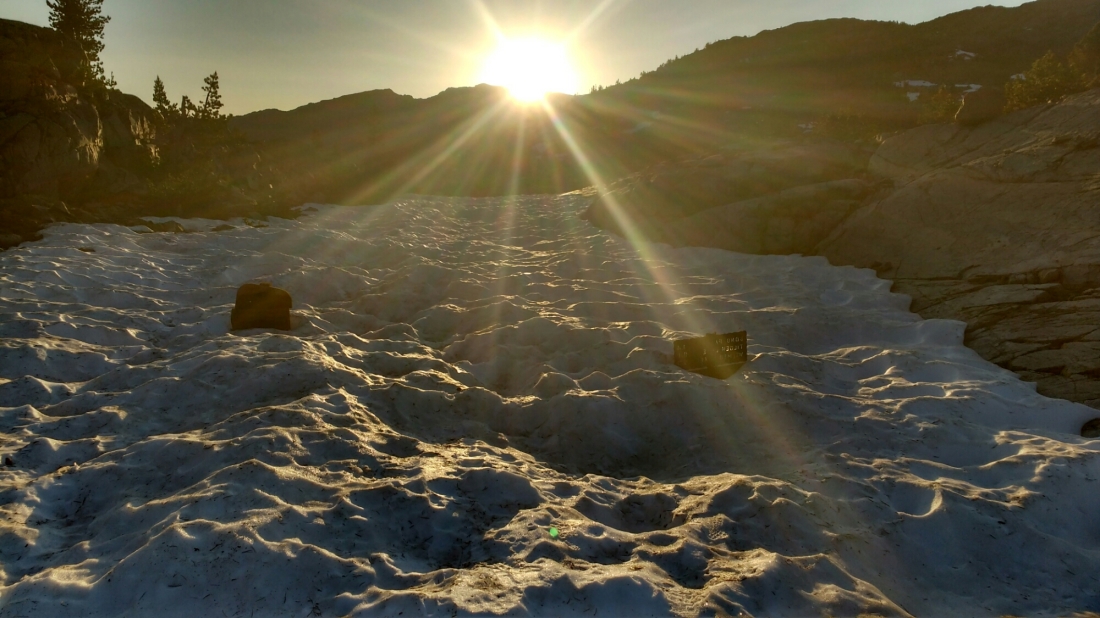 I got lost between Lake Harriet and Dorothy Lake last time I passed this way. This time, I did the same. Here’s a picture from shortly after Dorothy Pass  (there are real passes like Forester which state you in the face and let you know that you’ll feel like you’ve accomplished something when you’re past them and there are fake passes like Island pass which you wouldn’t realize were passes except for that second word when their name is written on a map; Dorothy Pass is in the latter category). It’s very pretty but between the rock which doesn’t show trail and snow which buries trail, I think most people get at least a little lost. What makes this area deceptive is that when the PCT starts to descend near a stream, it usually goes into the valley which that stream follows. Here, the trail starts with one stream but, just when you’ve lost the trail itself and are looking around for landmarks (say, like a stream to follow), it takes a hard right and drops towards Lake Harriet. Why not just look for Lake Harriet? Because, despite its size, it’s not visible from the ground above it until you’re pretty well into its valley and not the one from the first river. 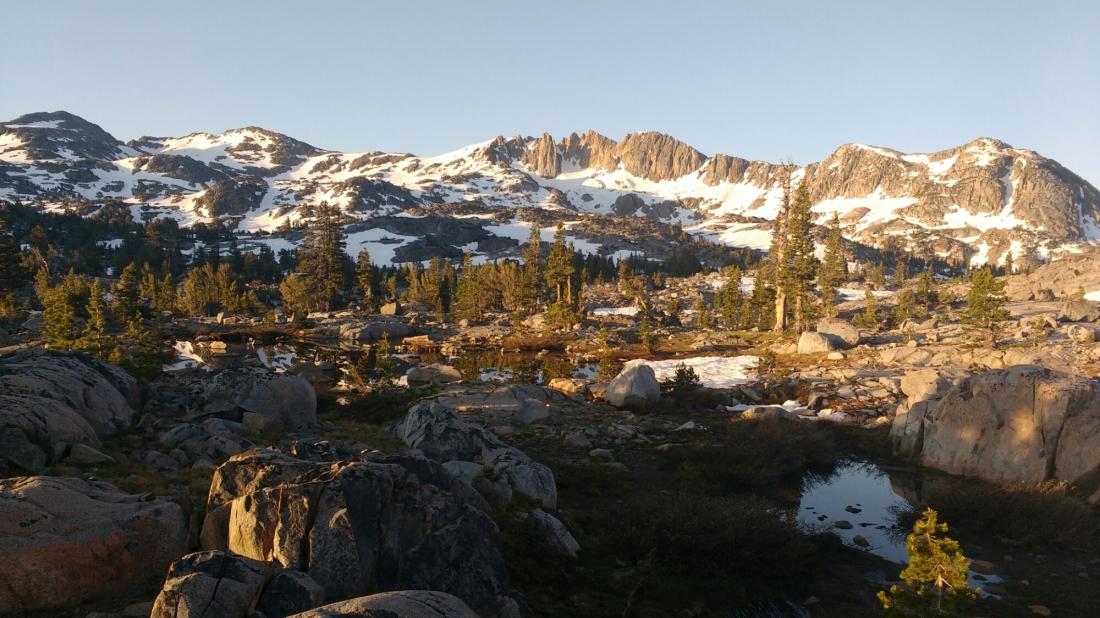 I could have pulled out a GPS but wanted some practice map reading the key area in the decision was probably less than a half square mile so I figured it was a pretty safe playground.

I correctly identified a rise which forced you to pick which valley to follow. While trying to confirm that reading, I looked down from it and couldn’t see a pond I expected to. However, I saw some red marks in the snow which are correlated with tracks (I’ve been told the red tint is an algae but why it seems to usually show in the trenches if old tracks, I have no clue) and if they were tracks, they were where I’d expect them to be if the pond were generally where I expected it to be. On further investigation, I found a cairn (I love cairns) and with it a trail. I was so proud of myself. 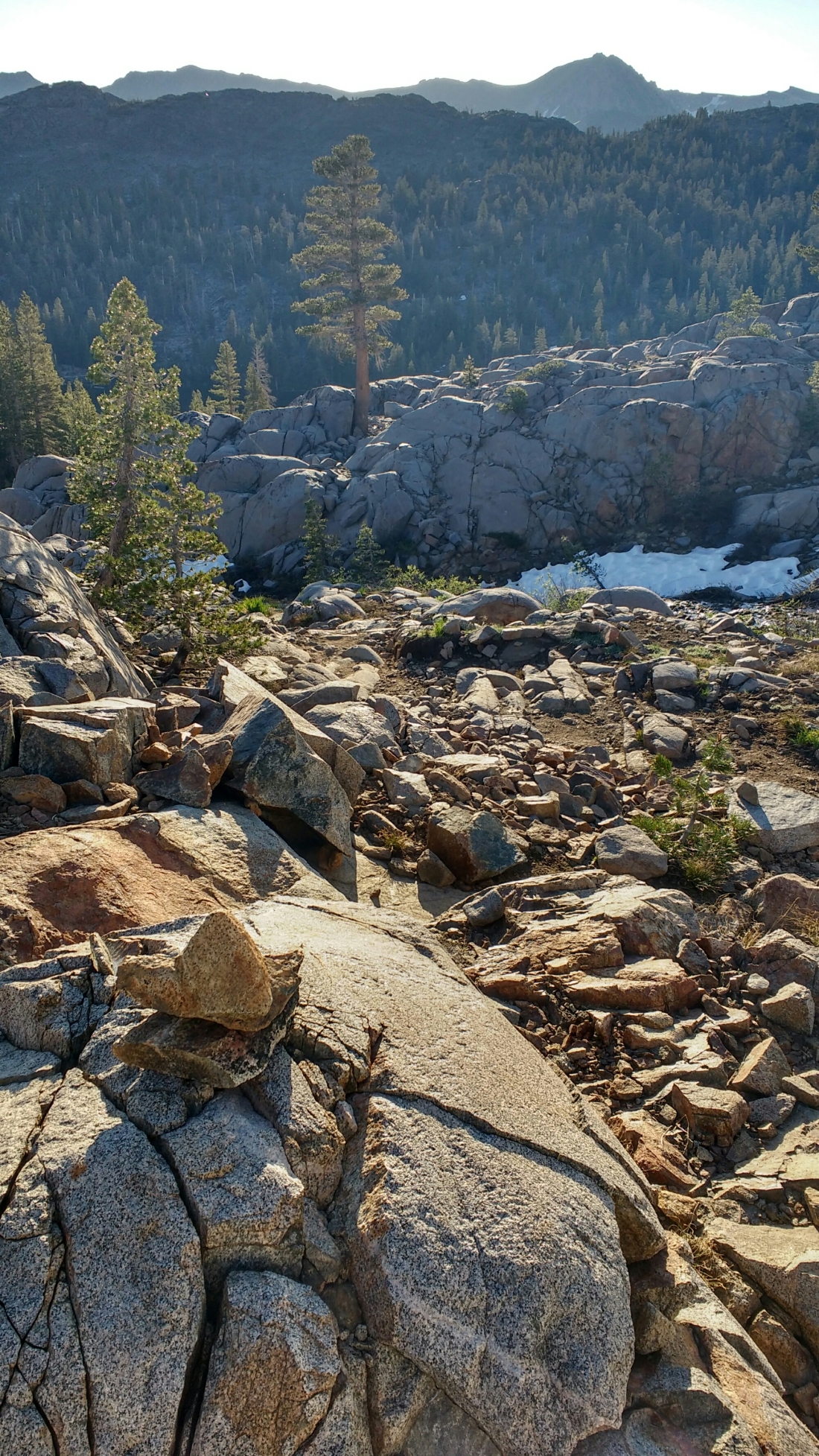 From there the trail lead pretty quickly to Lake Harriet. 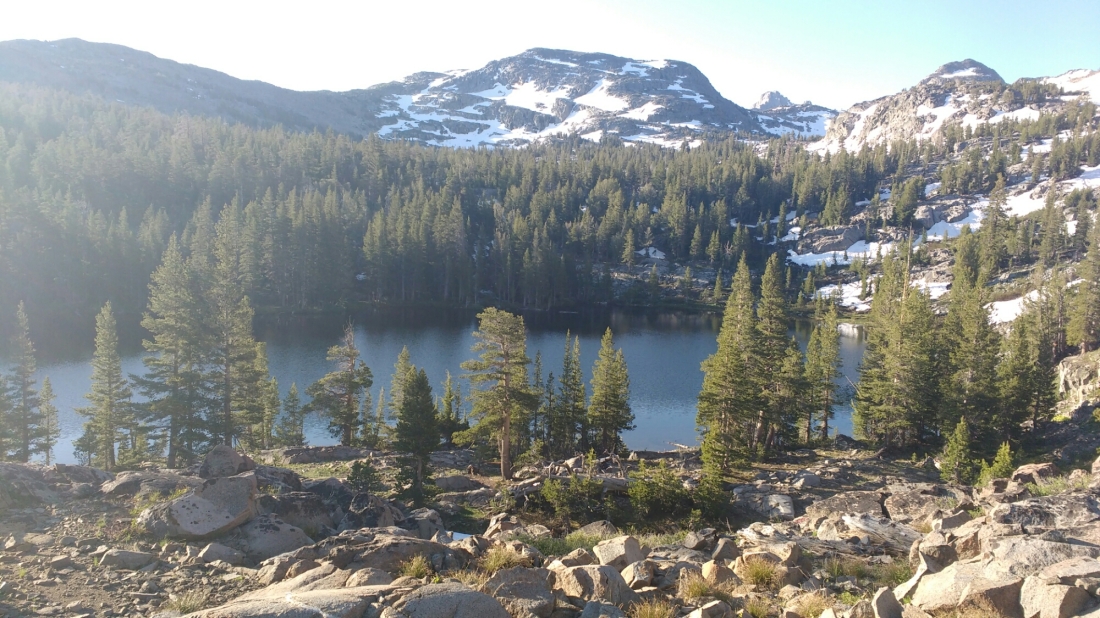 Crossing Lake Harriet’s outlet stream was reminiscent of yesterday’s obstacle course. It’s a little hard to see here but the water in the foreground is the stream flooding into the trail. 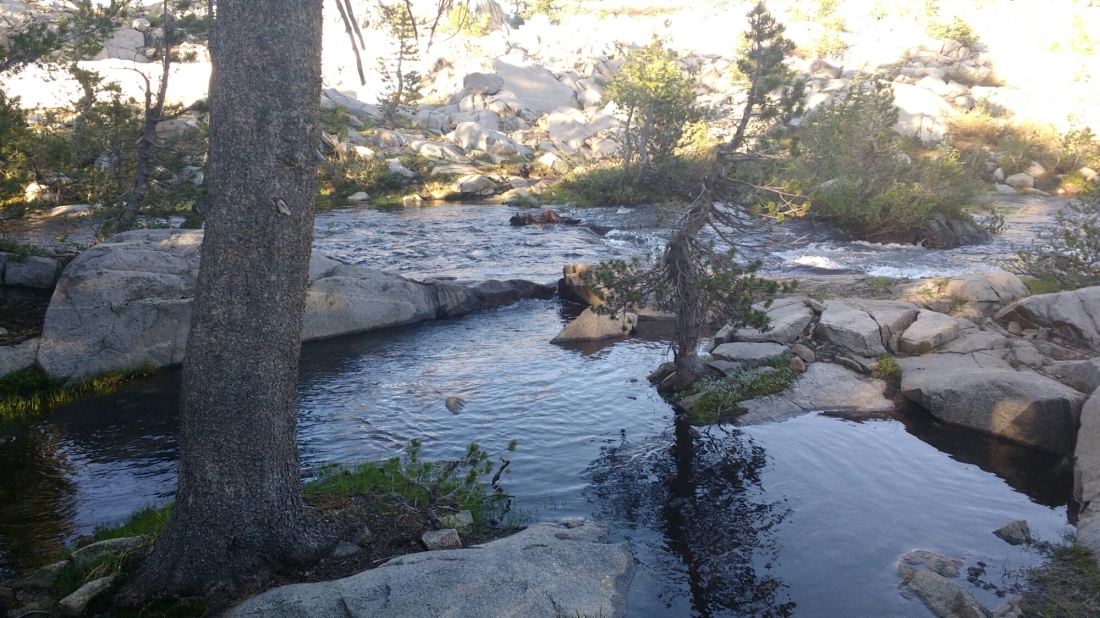 After that though the descent was uneventful as were the next several miles. Other than the 1000mile marker. 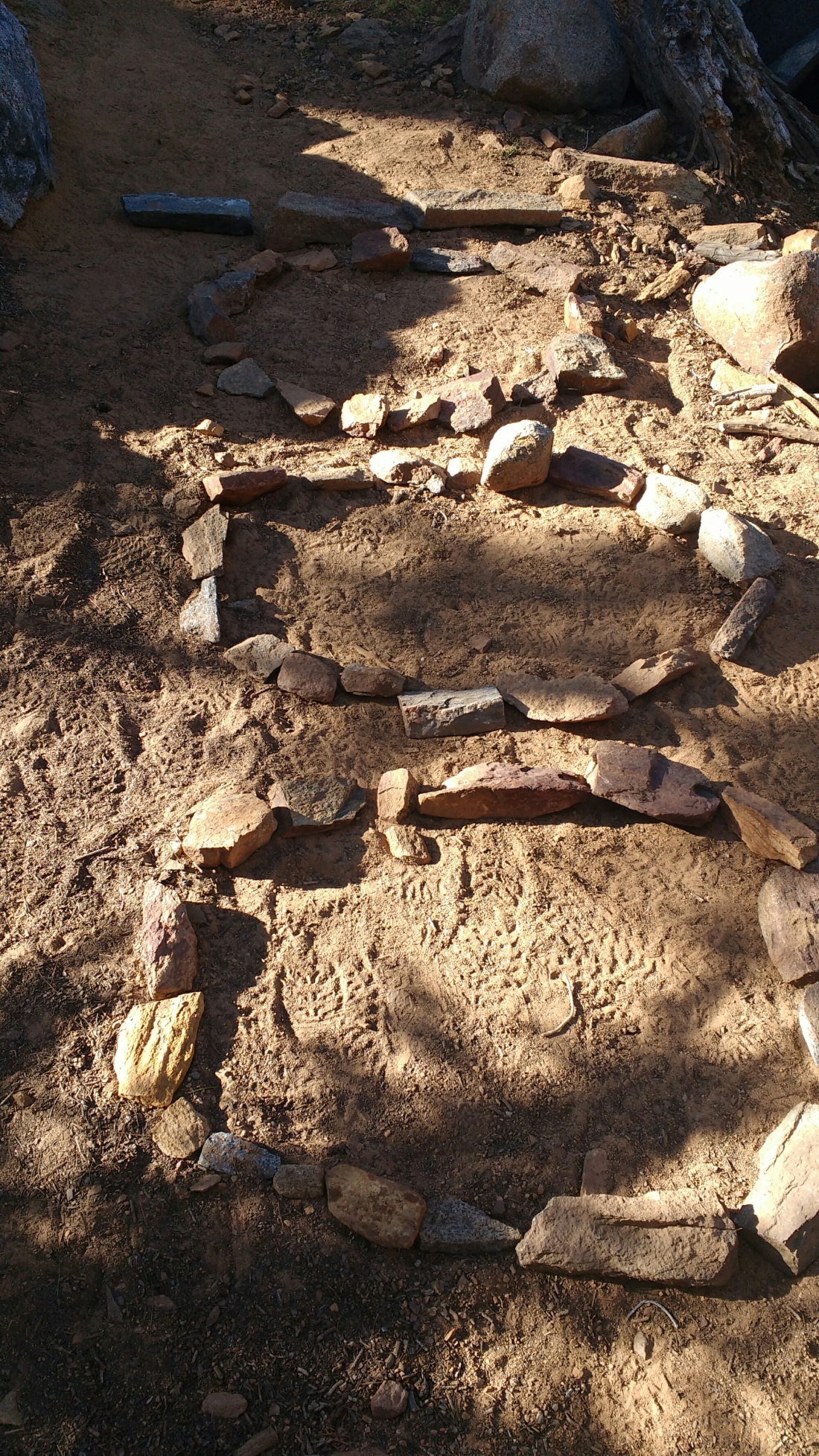 Also the terrain changed from a white-grey granite to a red-brown that almost wanted to be purple. 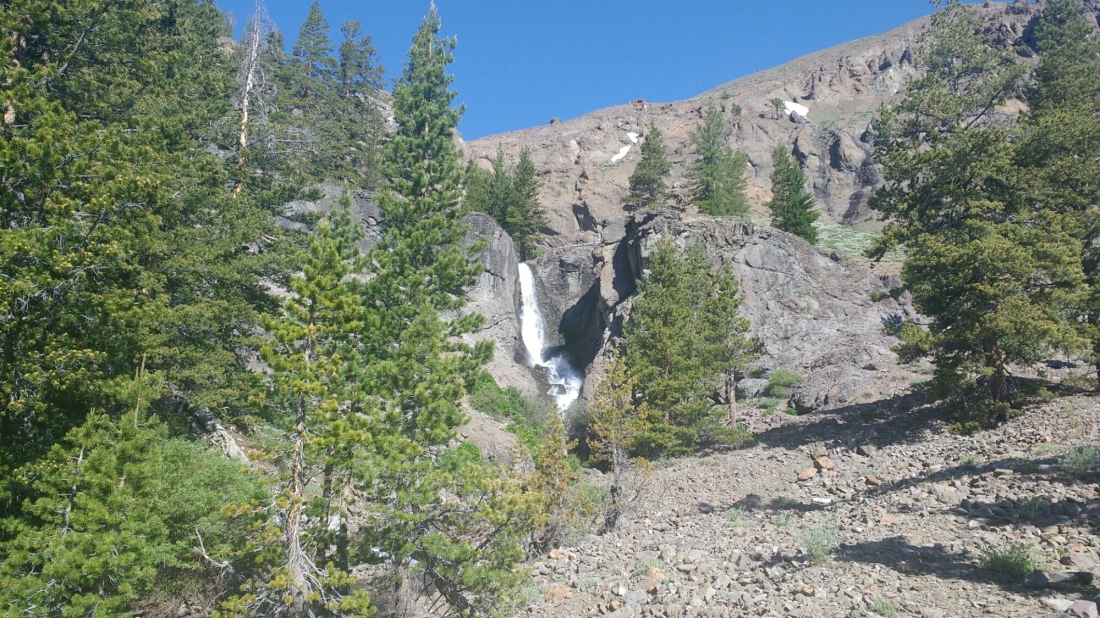 Eventually I reached the switchbacks before Sonora Pass. They were largely still under snow so I took a well trod alternate which I’d remembered seeing on my hike six years ago. At the time there was no snow and I wondered why there were so many alternates which were so well traveled when the official trail was so well kept. 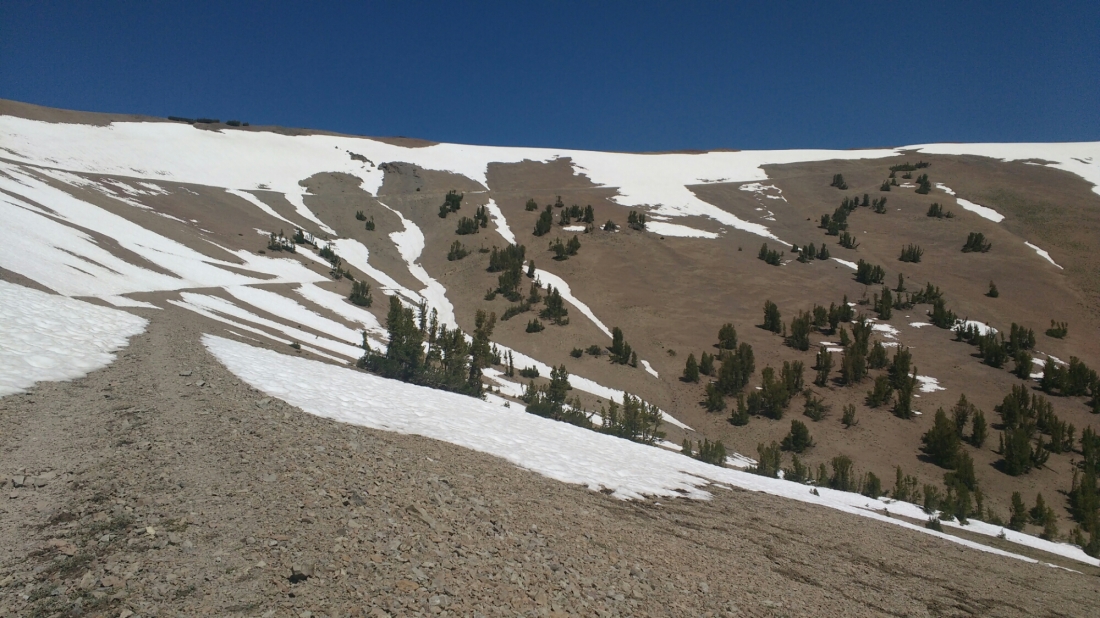 Looking back at the switchbacks. 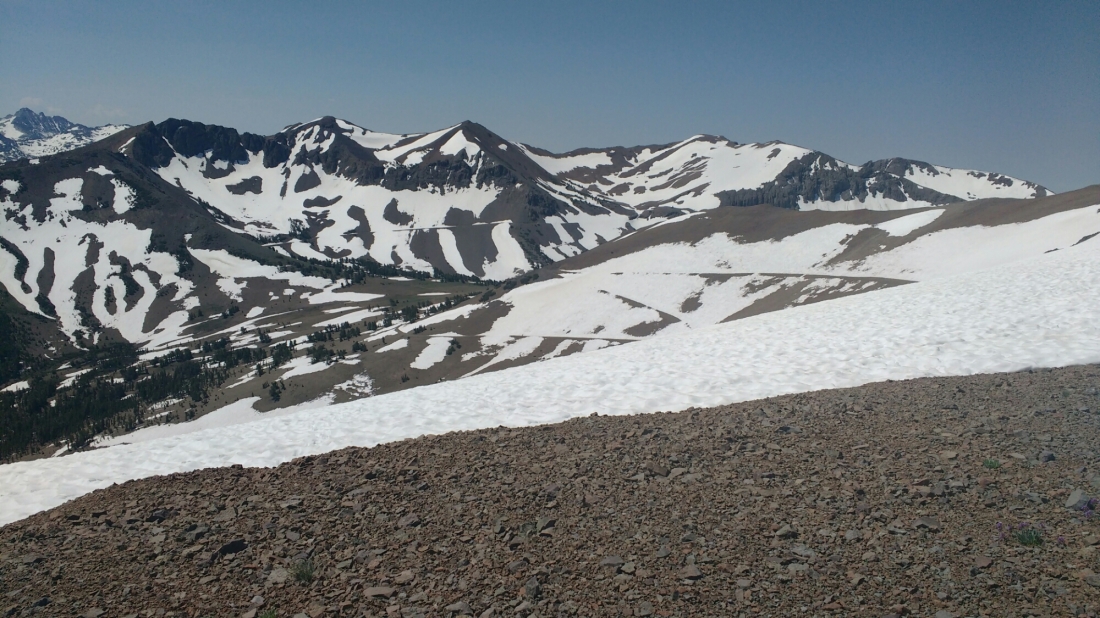 Unlike other passes where the switchbacks lead directly to the crest of the pass, these lead to a ridgewalk of several miles. 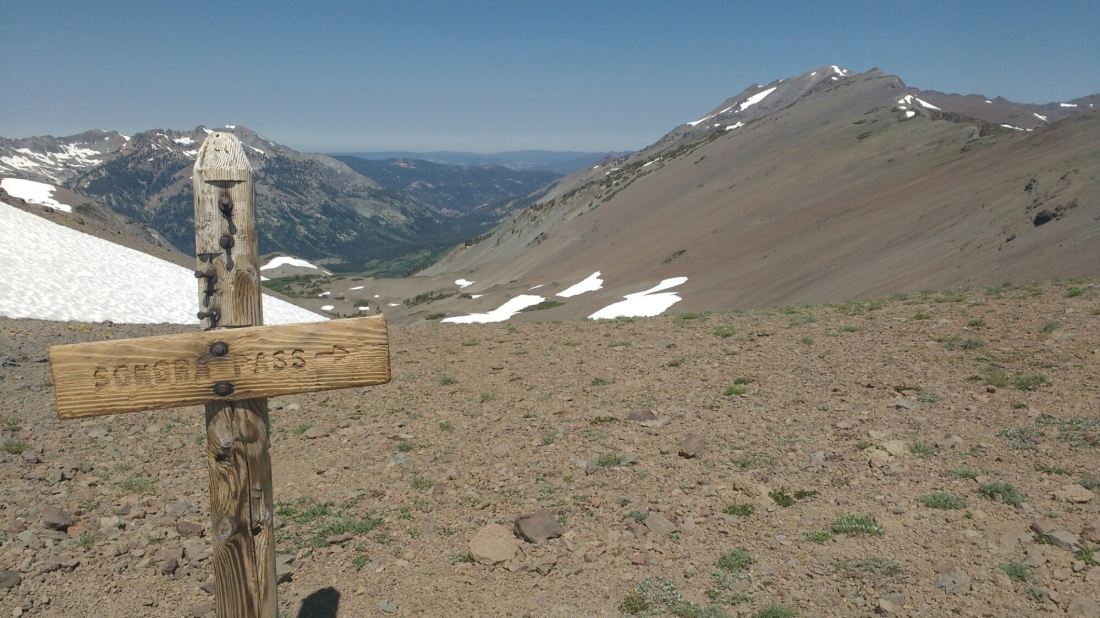 The walk is unique in that you get to spend so much time at the elevation of the pass, though Sonora Pass just barely squeaks in above 10,000ft. 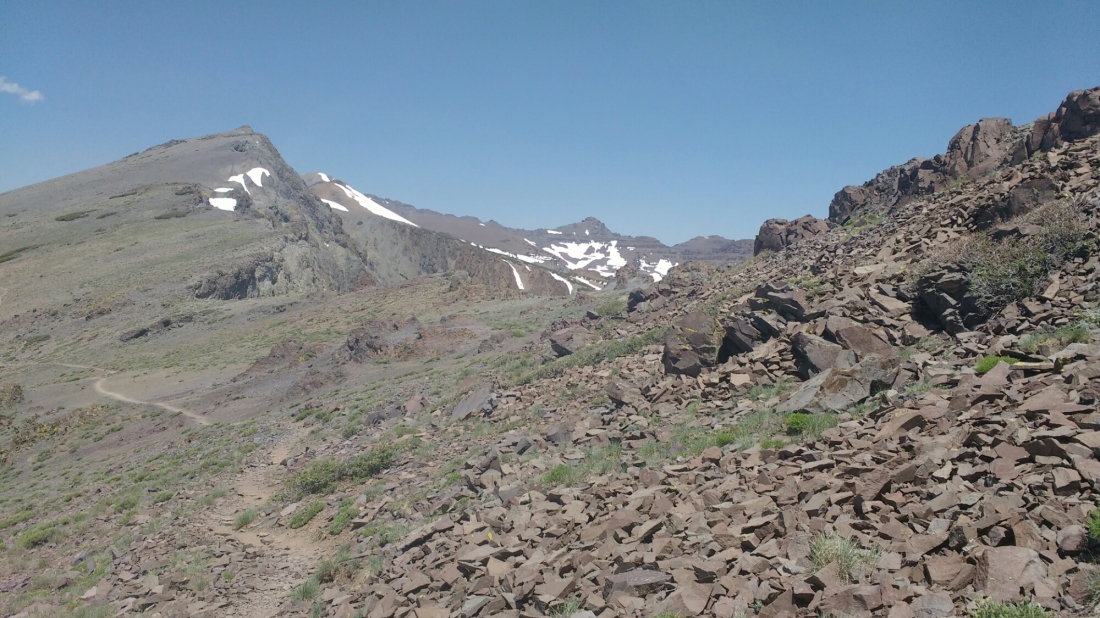 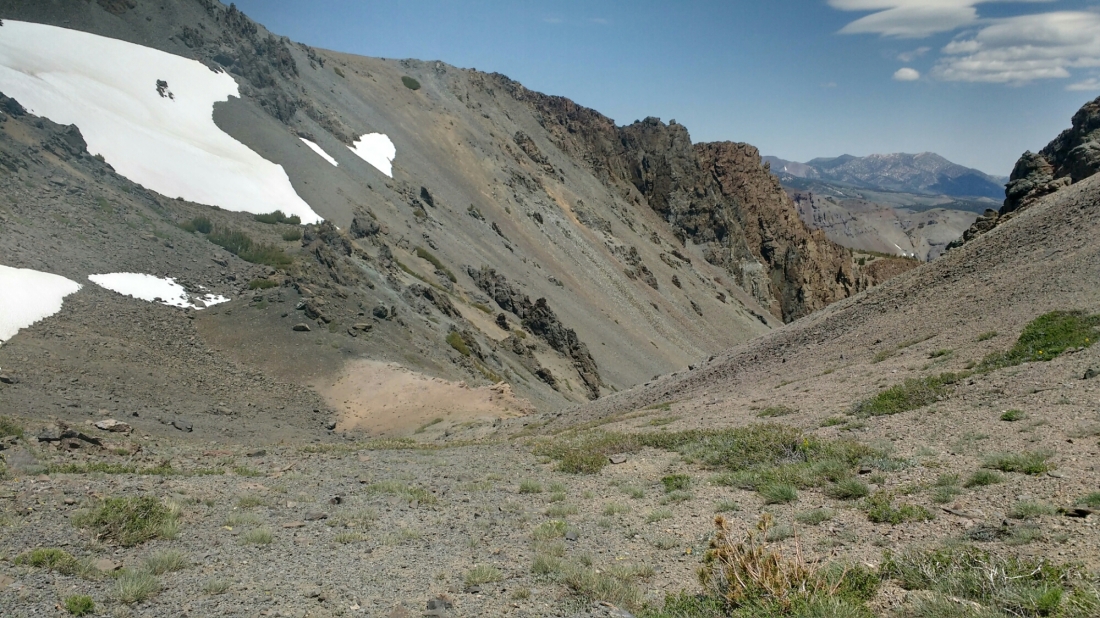 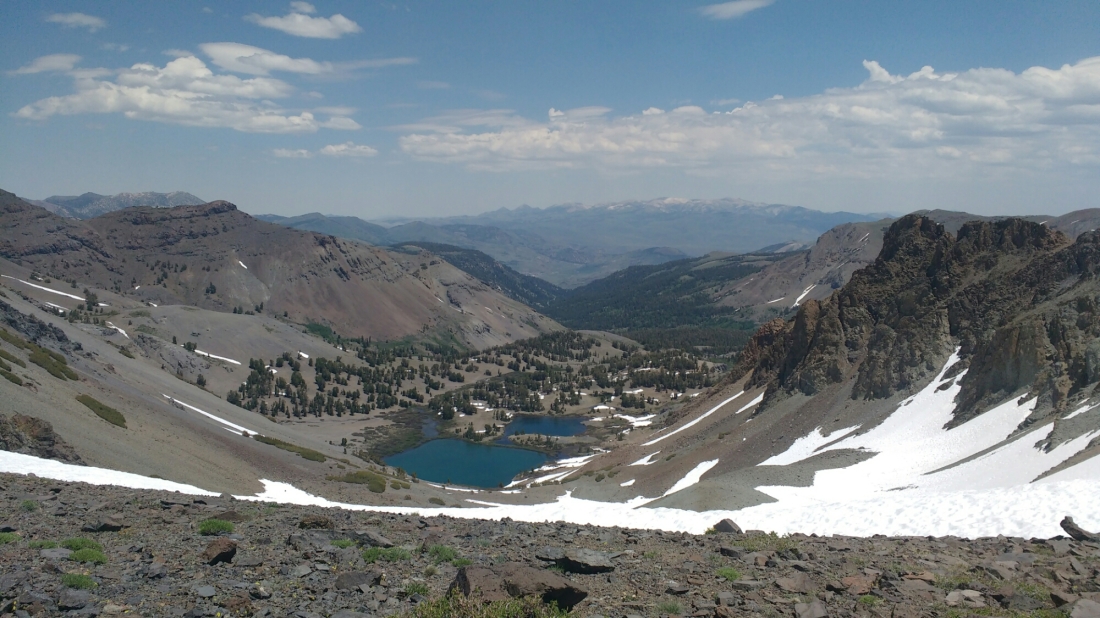 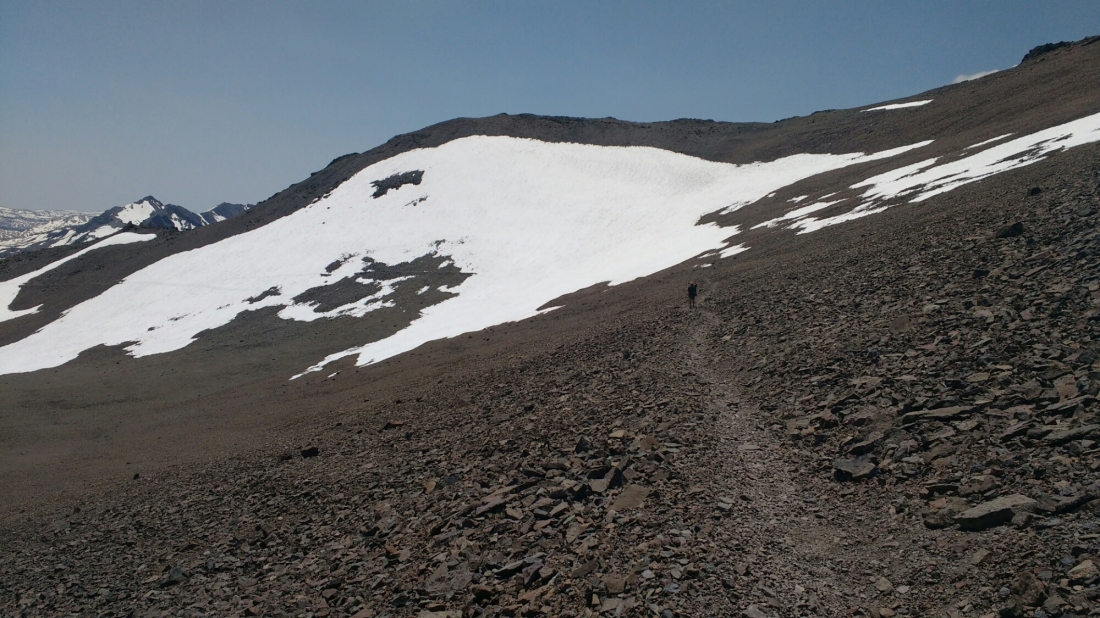 Finally, you round a corner and see the pass itself. 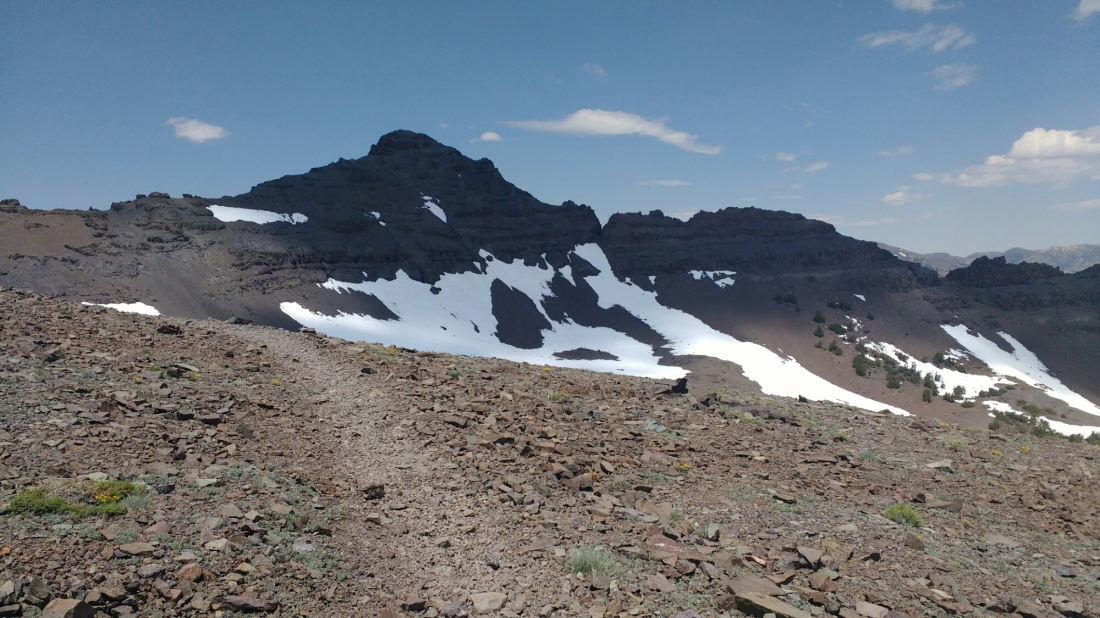 It’s completely different from every other pass in color and texture. 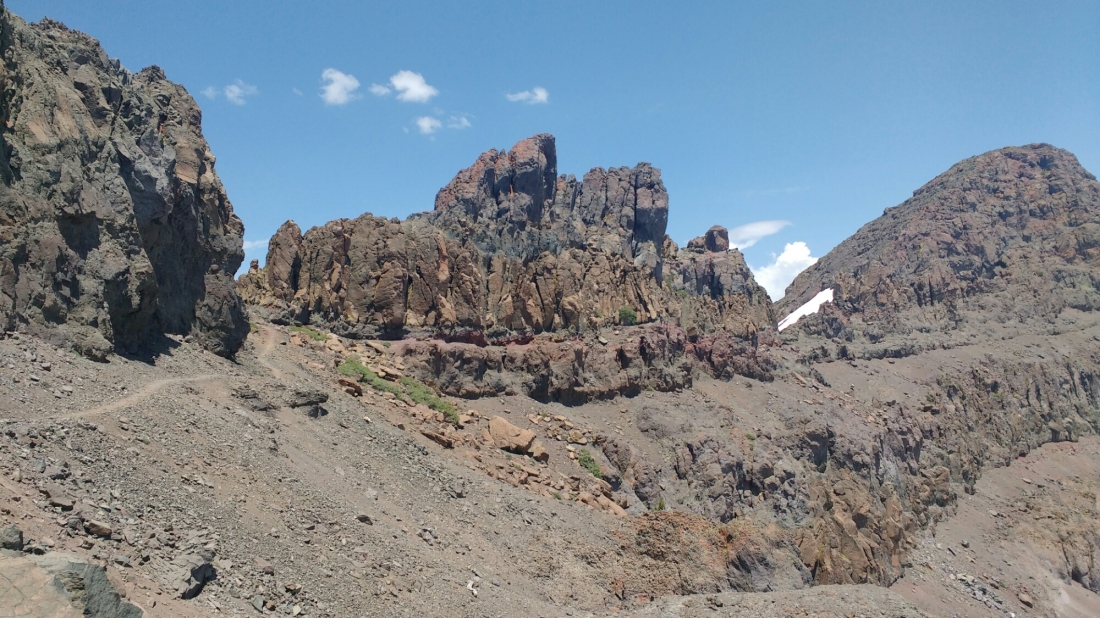 At the crest was a heart. 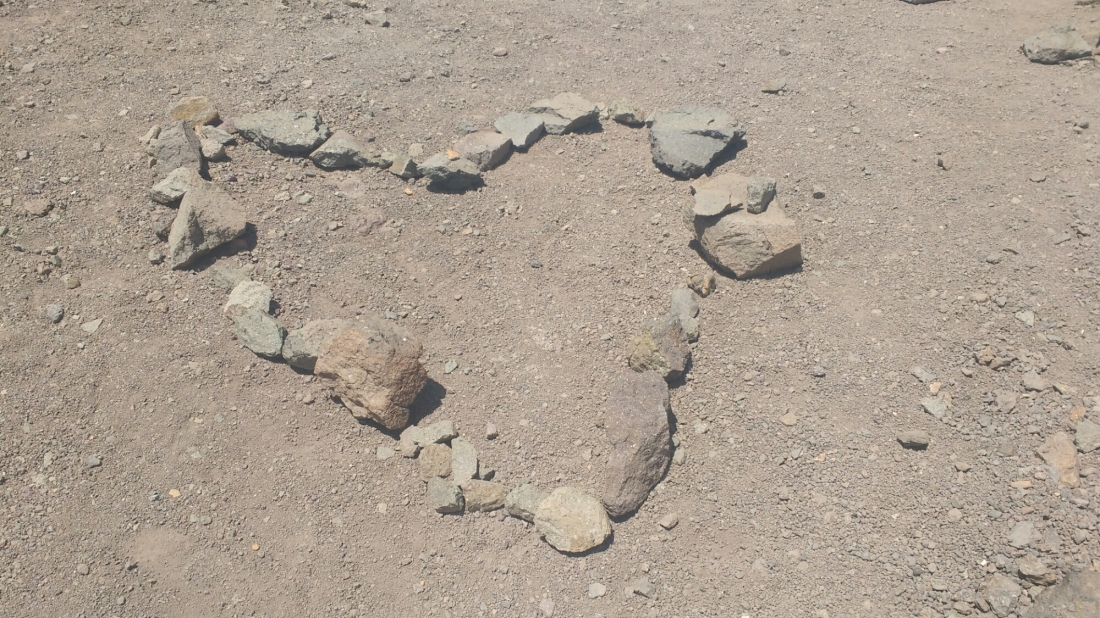 The walk along the backside revealed a very different landscape from what I’ve been traveling through. 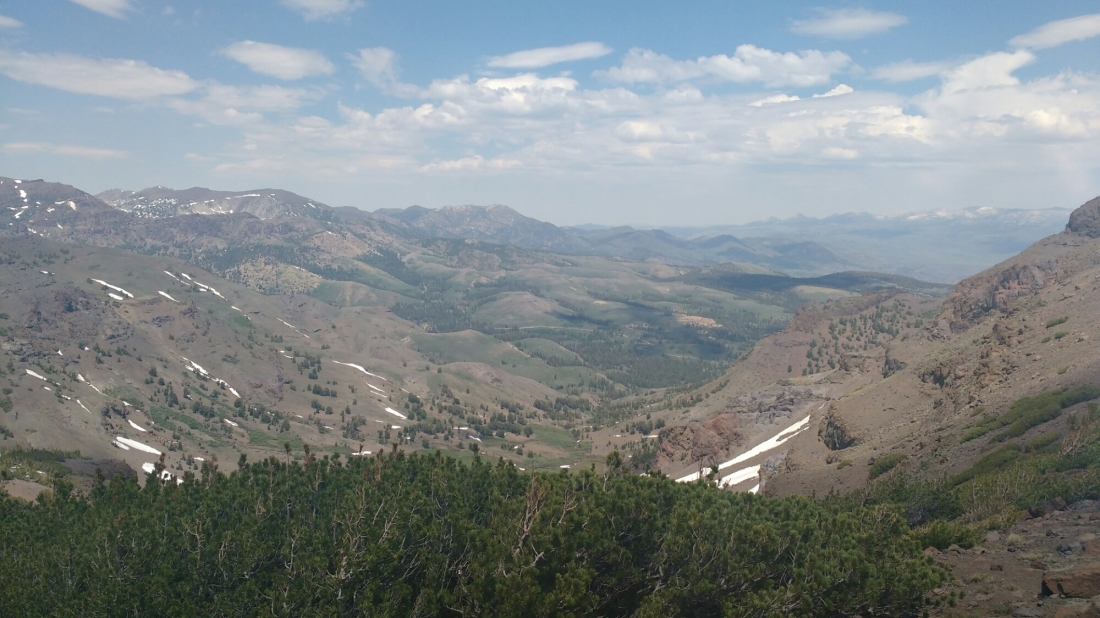 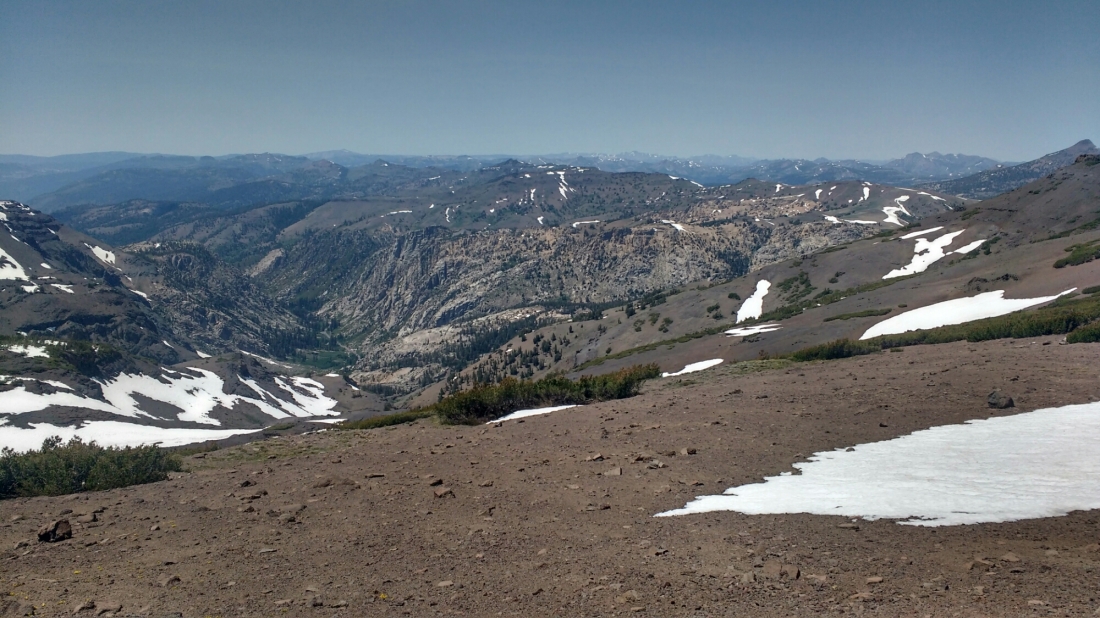 Just as I thought I’d seem the last of the big snow crossings… Massive glissade and boot ski. 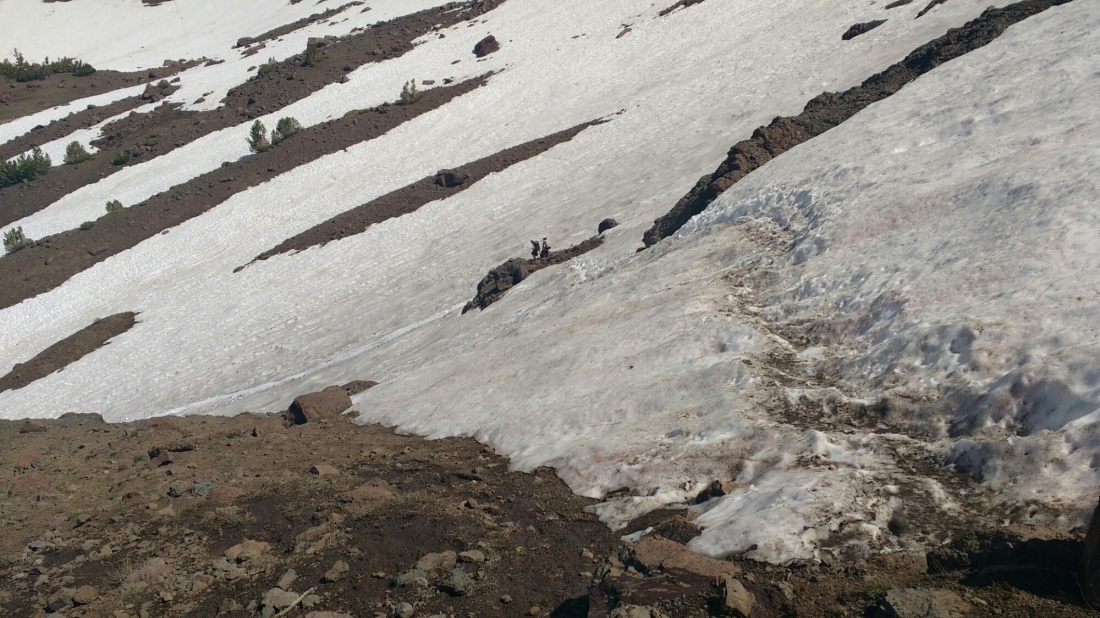 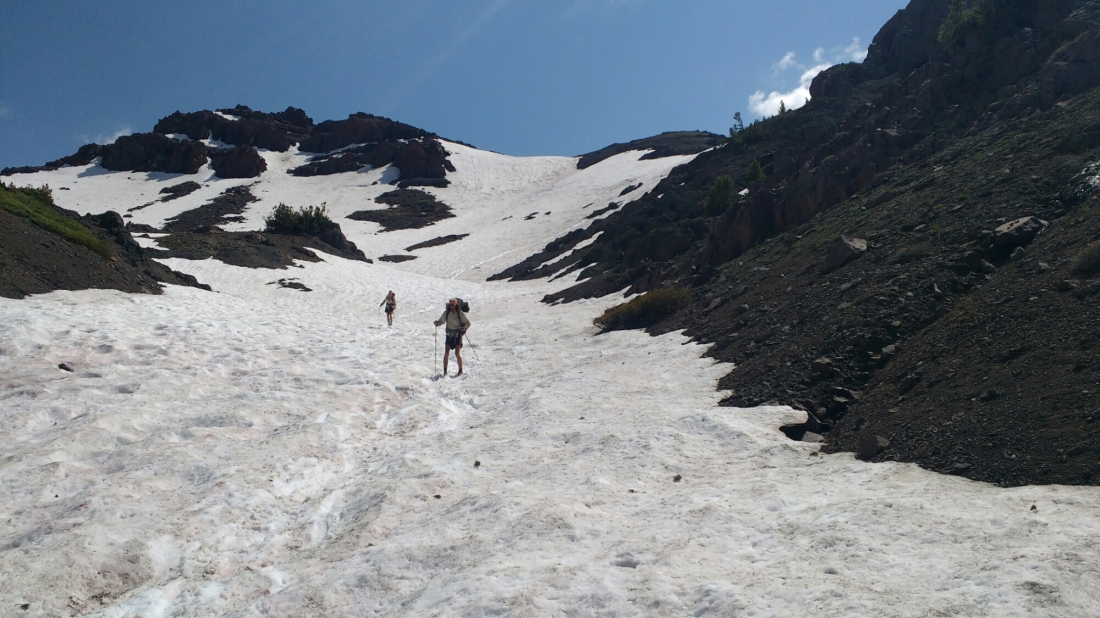 And so ended the Sonora Pass adventure. 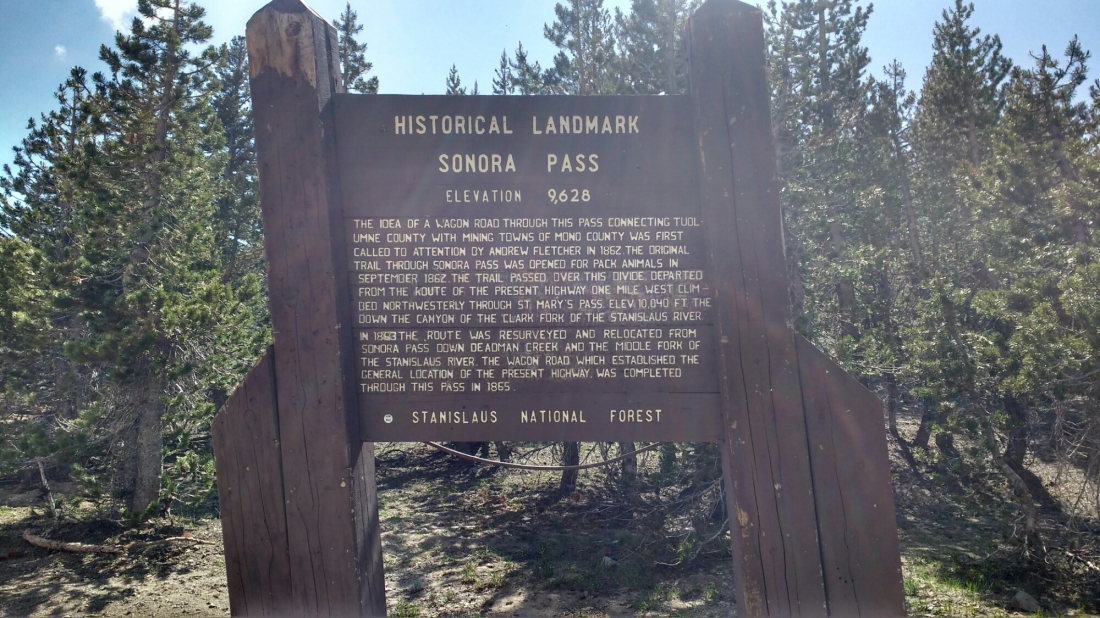 At the trailhead just after the highway, I met the guy who runs Sonora Pass resupply. He gave me a water bottle since I’d lost mine and, despite not having and order previously placed, took my bear can, ice axe, and microspikes for shipping home. My backpack feels much lighter.

Just past the trailhead, in the Carson-Iceberg Wilderness, I noticed clouds promising rain and so set up my tarp, are dinner and caught up on blog posts. 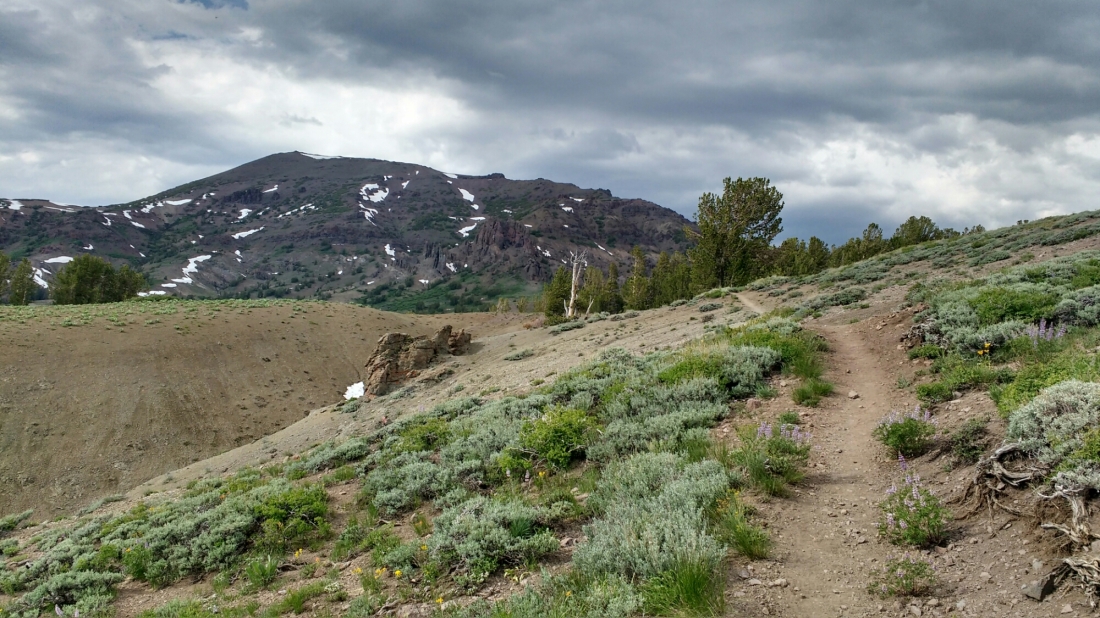 Around 7pm the sun came out and chased off the worst of the clouds.