Like yesterday, today had an enchanting atmosphere filled with various sizes of water drops. Unlike yesterday, this had a practical purpose as it kept me cool during a challenge to hike 50 miles in one day ending at Timberline Lodge. Timberline Lodge is renowned along the length of the trail for its breakfast buffet and doing a 50 today let’s me be present for the most anticipated meal of the trip. I’ve heard of other people doing distance challenges into Timberline and so it seems an good way to check off my goal of feeling like I’d made a real physical accomplishment on the trail.

Here’s a screenshot of the app I use to track waypoints on the trail. It’s 5:50am and the app is filtered to show that Timberline Lodge is 51.58 miles from where I started near Olallie Lake. 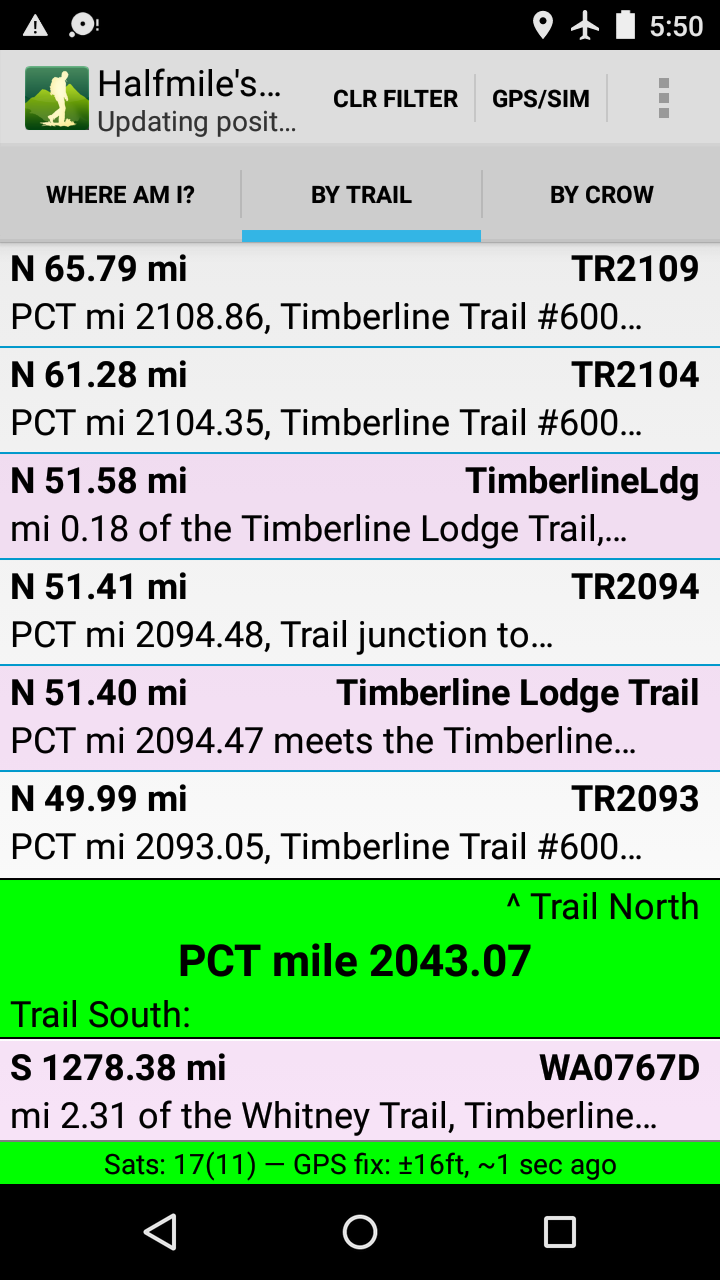 This was a good stretch to do a distance challenge since the scenery mostly looked like this.

With a few exceptions: 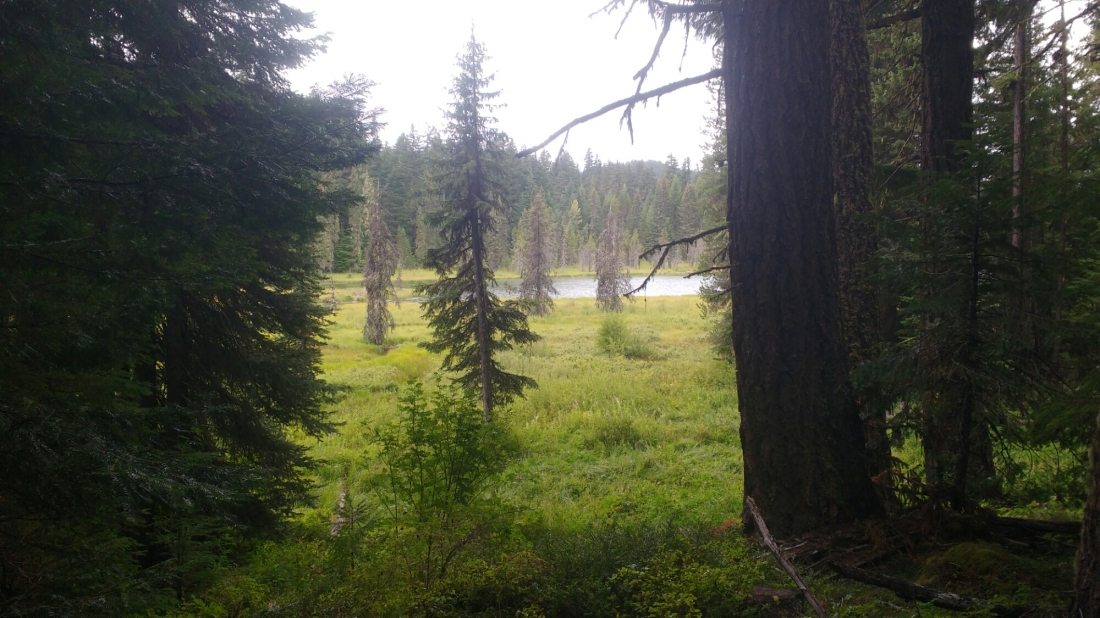 The morning was mostly downhill with several thousand feet of decline coming slowly over about 20-25 miles. My strategy was to run (ie slow jog) the downhills, try to maintain a pace of 3 miles per hour on the uphills, and use the flats for recovery if necessary but ideally for hard hiking. With so much downhill at the beginning, I made 15 miles by 9am, 19 by 10am and 26 by noon. With such promising progress, the challenge shifted to be whether or not I could make it by dinner which was particularly interesting as I didn’t know when dinner service ended, though I assumed 7pm. As I hadn’t packed a real dinner, just bars, this would be a real treat.
In the early afternoon the trail leveled out and I started running across people who I hadn’t seen since the Sierra. I last saw Copilot, for example, crossing Bear Creek. 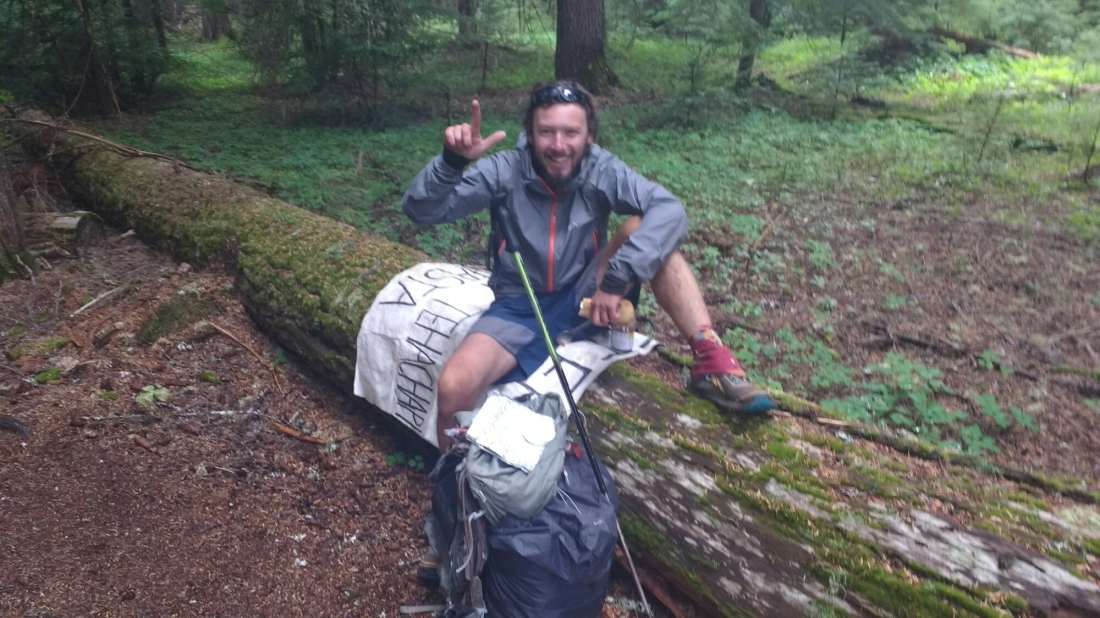 I also got to run on a boardwalk. It wasn’t quite like Santa Cruz through. 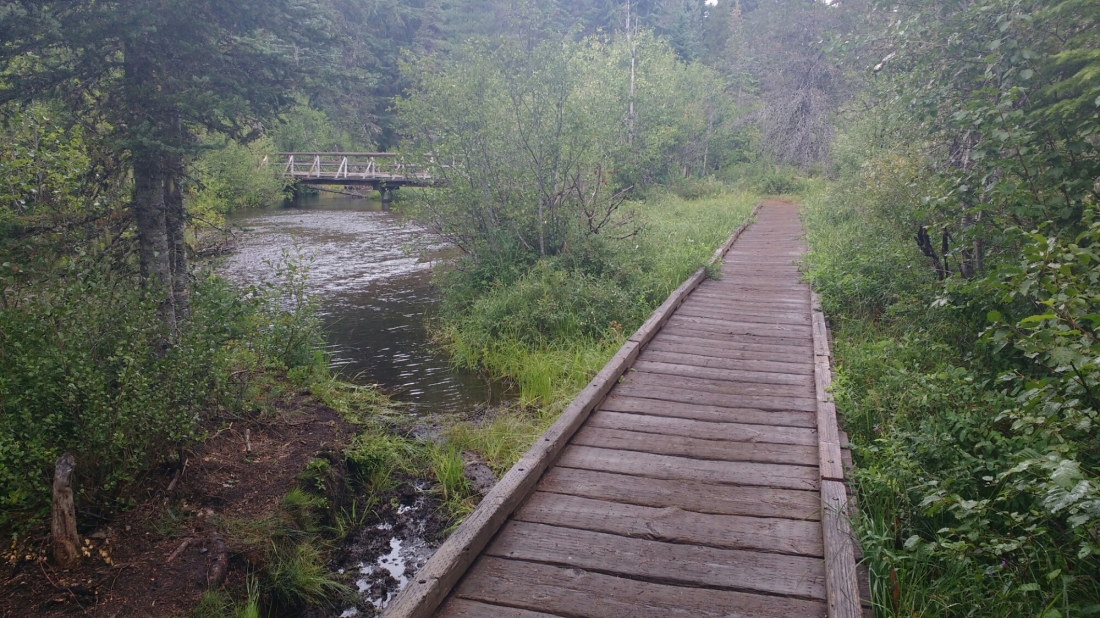 I ran into a couple of trail angels who have me some Oreos. This wound up being a big help as I’d run out of snacks that I could reach without stopping and taking my pack off.

The uphill kicked in with 15 miles to go. By this point I’d lost the morning’s abundance of energy and my hamstrings were getting pretty tight. Still, I made it to 40 miles by 3pm with little running since noon. At this point, despite the about 2000ft of climbing remaining, I felt like things were in the bag. The trail remained soft and after crossing a busy highway, I managed to keep pace up a slope and only a long level stretch which got me within about five miles. I’d been getting hungry and was out of accessible snacks but didn’t want to eat because I wanted dinner at Timberline to be that much more amazing. Crossing another highway, I drank the last of my water and started up what I thought was going to be the big which climb I’ve heard people mention leads into the lodge. While generally upwards, the big climb didn’t materialize but about 2.5 miles out I was beginning to notice my vision would go slightly blurry and, while not dangerous, I’d have to consciously focus to sharpen the picture. Despite being so close, I stopped for a few minutes and drew water from a stream running under the trail. I still didn’t eat because I didn’t want to spoil my dinner but at this point, a five star chef would not have been needed to make me think I was eating from God’s own table.

Finally, with a little over a mile left in the day, two things happened. First, I found the big hill. It’s not actually that big but it is covered in sand which is miserable. Second, I started to bonk. For the uninitiated, bonking is when you run out of energy because there’s no fuel easily accessible to your muscles. You can still move the muscles but there’s no power behind them. You can put one foot in front of the other but it can be a struggle to lift yourself onto thr forward foot. I’d been traveling at a minimum of 3 miles an hour and suddenly became very worried that I would be able to make the last mile in the more than an hour that remained. (Mt Hood is in this picture on the right, in fact, I’m almost right under it, the fog completely obscured it). 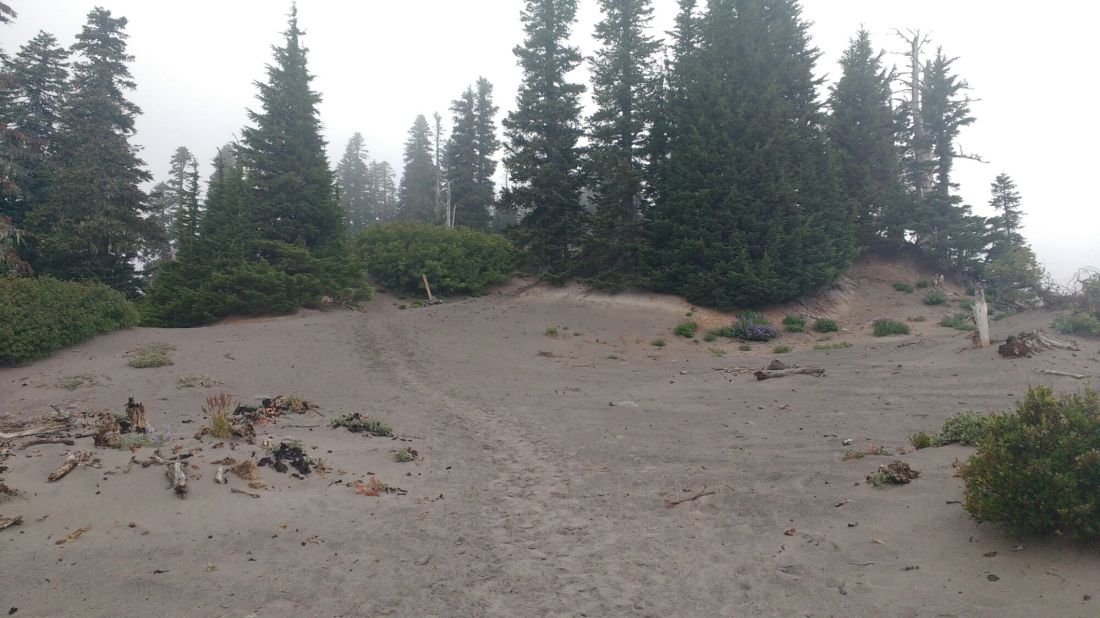 As I was taking yet another small break to check my iota of progress since my last GPS check, Flip Flop came up behind me. I’d passed him just before the last highway and was surprised to see him again. Pride, though it may come before a fall, has its uses and as I didn’t want to look as slow as I was going in front of a guy I’d just passed, I tried to make a good show of it. Over dinner, he told me that he hadn’t passed me because I wasn’t looking good. Either way, it got me the last little bit to the lodge.

At 6:20pm this most beautiful sight came into view. I was chilled from the wind which the final ridge walk had exposed us to. I felt hungry enough to eat a day hiker (a common food source for desperate thru hikers). I was sore enough that when I finally sat to order a pizza, my legs froze and I had to actuate them largely from the hips when hobbling to the wash room. 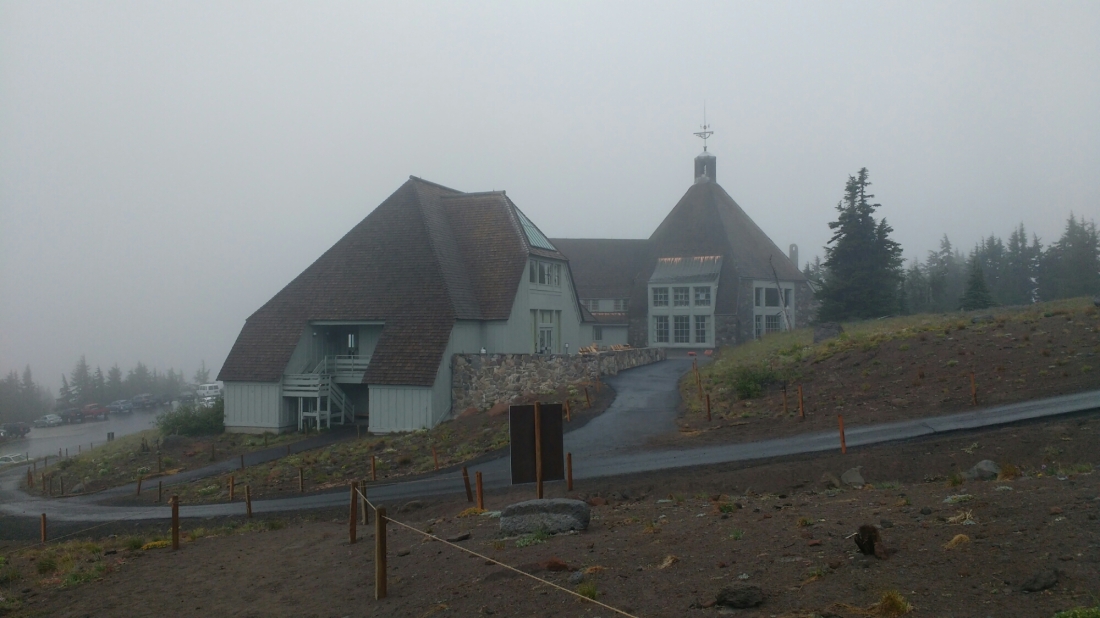 Over the course of dinner which I ate with Flip Flop, a couple at the table next to us identified us as PCT hikers and offered the use of their shower. Wonderful, wonderful people. The husband the had once helped support a hiker attempting to set the speed record on the Appalachian Trail and so explained that they had a soft spot for thru hikers.

Warm, clean (except my clothes since laundry was only for guests and the most economical room that night was $275), and full, I sat in a comfy chair to do a quick internet check. It was hard to get up to back outside amd find a place to camp.