Today it felt like the Hayduke started for real.

Around 5:45am continues down Kane Creek roada road. The road was easy to follow even without my headlamp so I turned it off and let daylight come naturally. 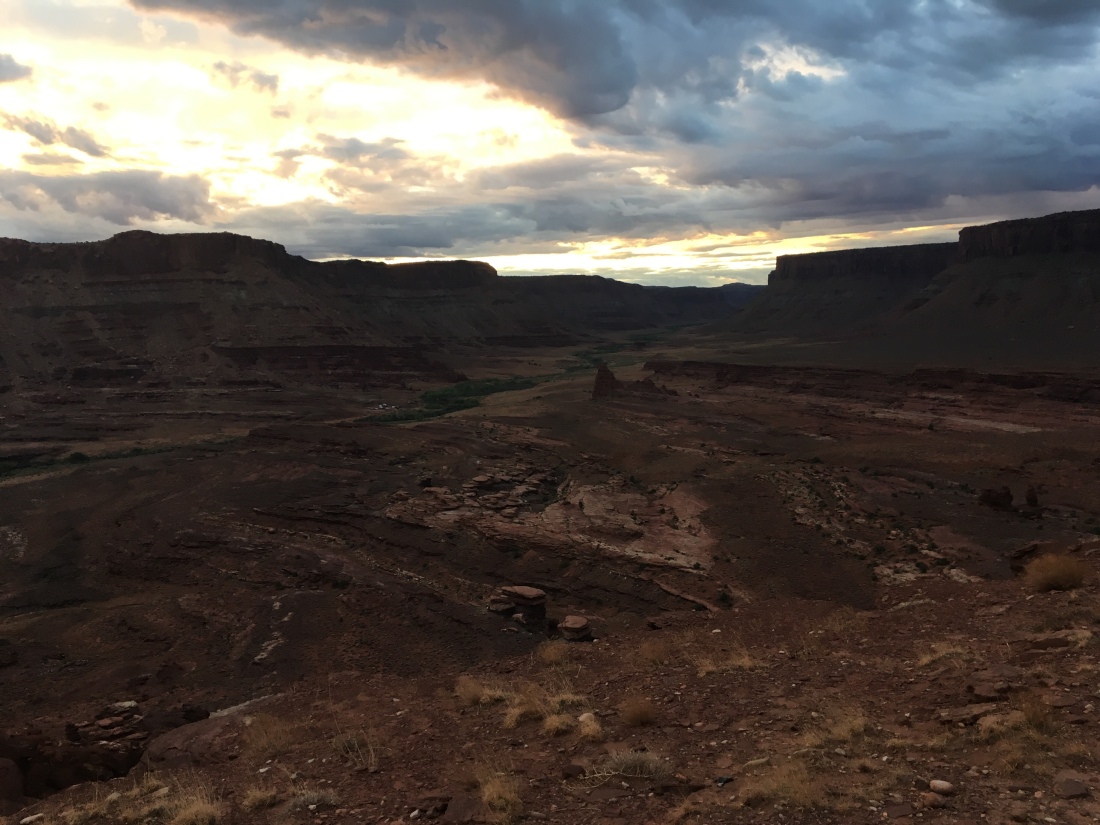 But Hurrah pass itself almost put me out of my mind. 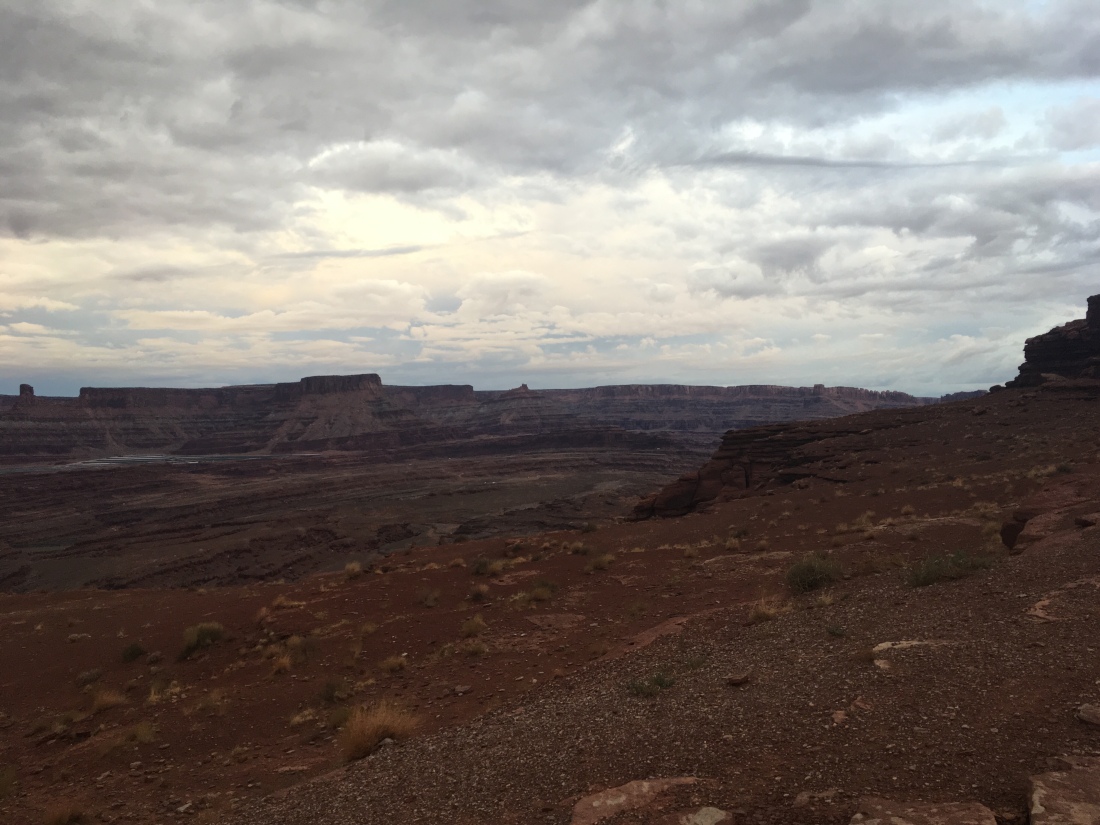 On the way down, I saw the same Jeep come and go then come and go again. They said they’d forgotten some clothes. I guess that’s what’s nice about backpacking, you always have all your stuff.

Most of the day was spent on a 4×4 track which doesn’t sound that exciting. After Hurrah pass, things were nice but not grand. I took a wrong turn once on an ATV playground but it was easy to backtrack. I skipped going down to the Colorado to get more water. More on that in a bit. 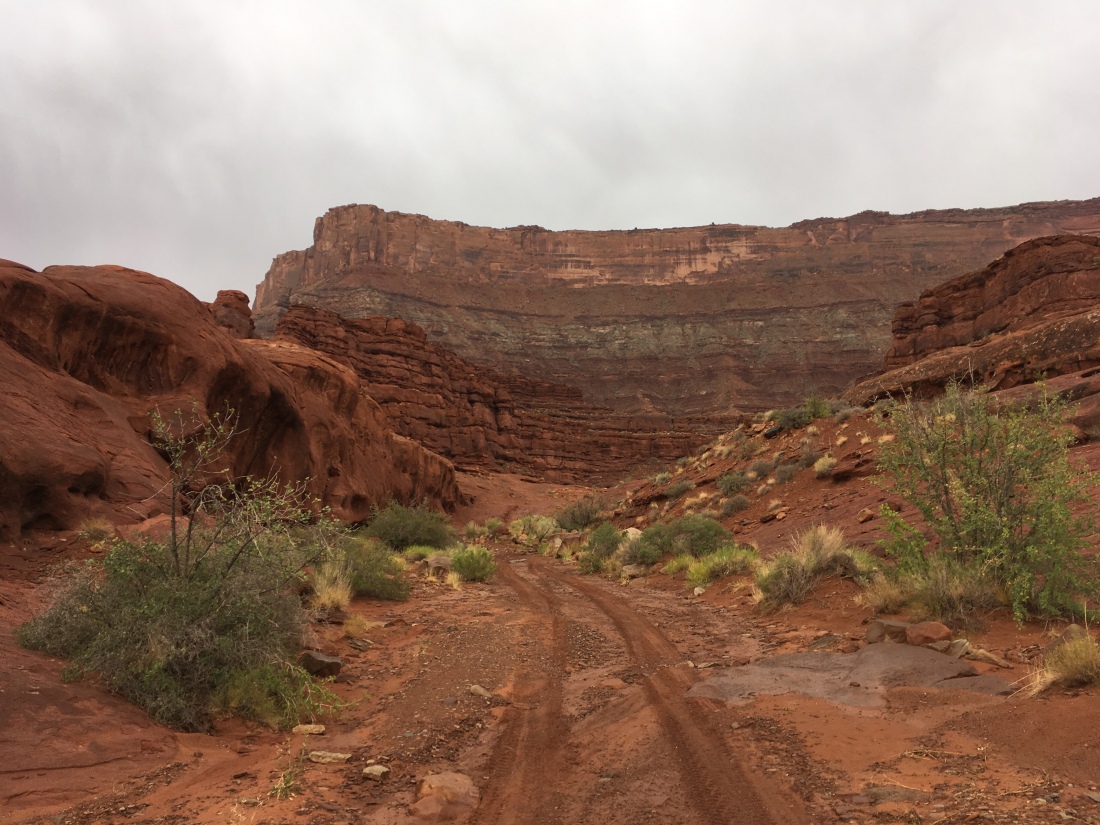 After turning off into the Lockhart Basin track, things got interesting fast. I’m impressed that someone found a path wide enough for a vehicle up the frequently narrow or rocky bands in the cliffs. While this is a 4×4 road, none of the tracks looked recent and so I decided to think of it as a hiking trail that ATVs could go on a well. 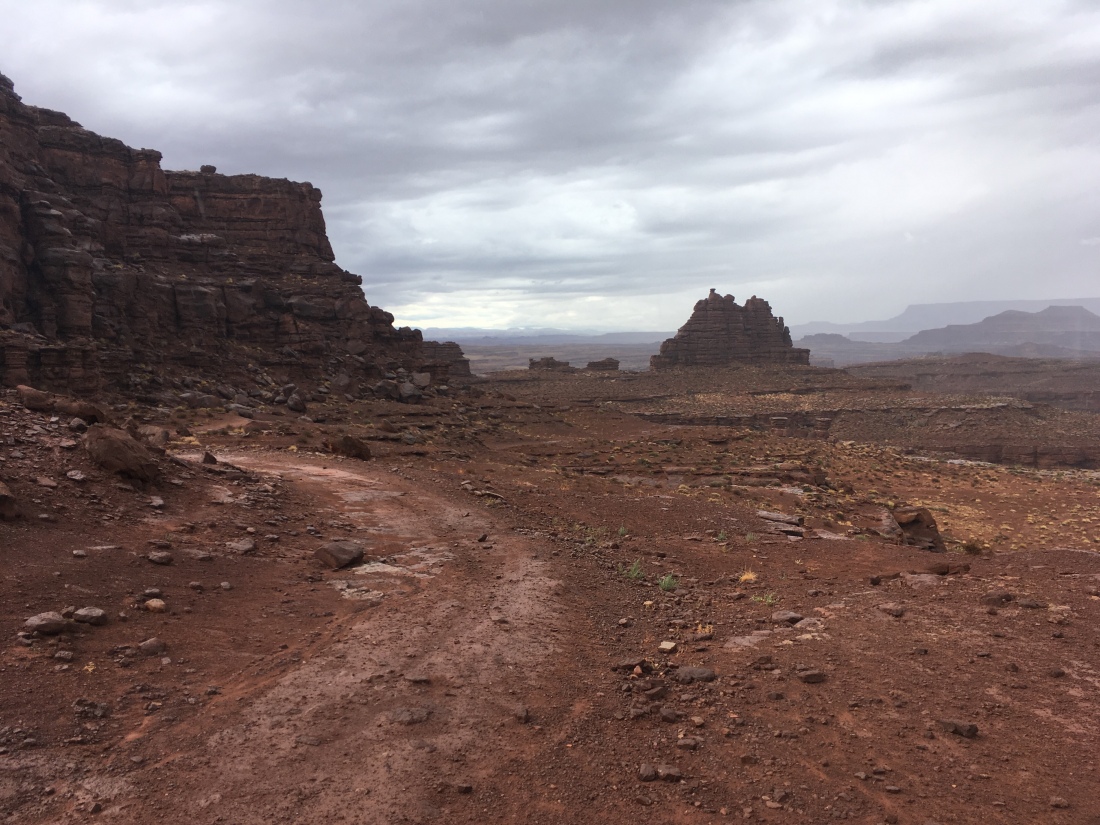 Lockhart Basin sounds like you’d be down inside a basin. In fact, you’re above things. The route follows the bench in and until it turns into the next valley.

During this time, I realized I’d miscalculated my water supply and so was probably going to have to bail out two miles each way once I got into Lockhart Canyon to draw water from the Colorado. I hate “bonus miles” and was very excited to find a shallow puddle of clean, clear water in a rock. 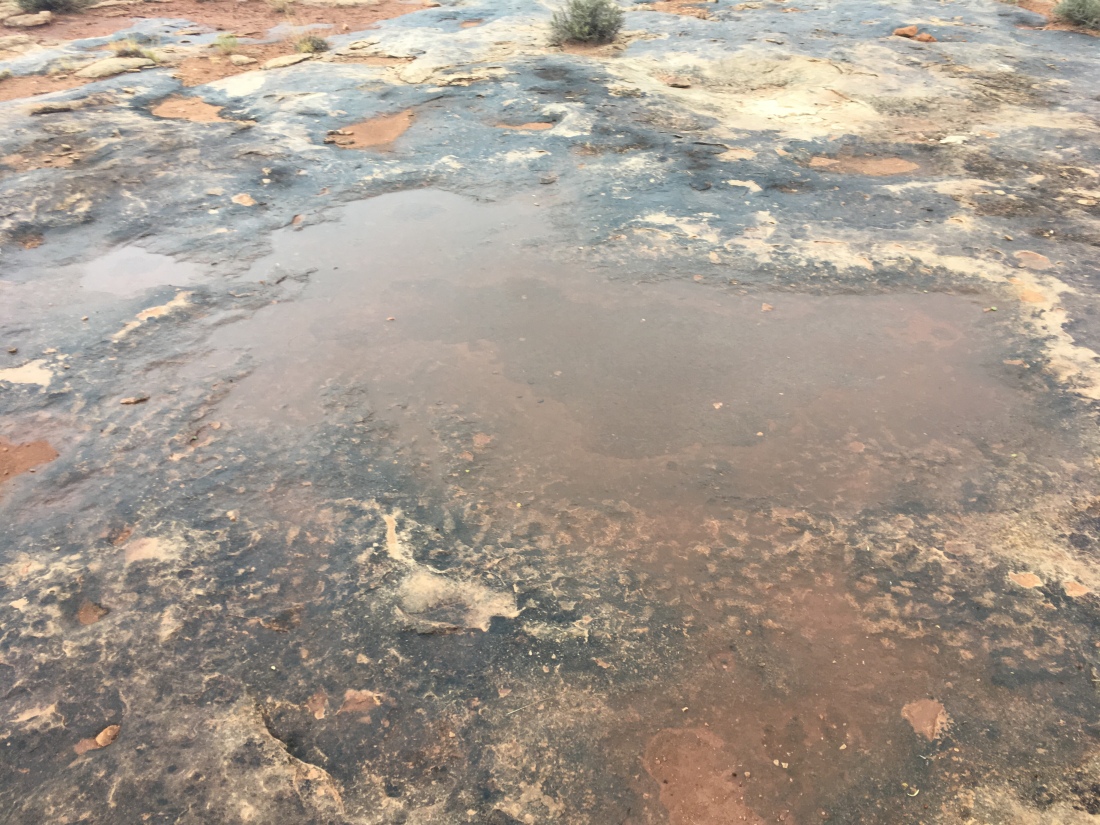 It had been raining intermittently and when I stopped drying out between drizzles and the drizzles became light rain, I gave in and put on my rain clothes. The upside is the rainclouds added a constantly varying aspect to the views. Sometimes two ranges looked similarly distant but then one would disappear in the clouds and you’d realize it was farther away. Watching the clouds come in waves and watching each wave advance was a interesting game as well. 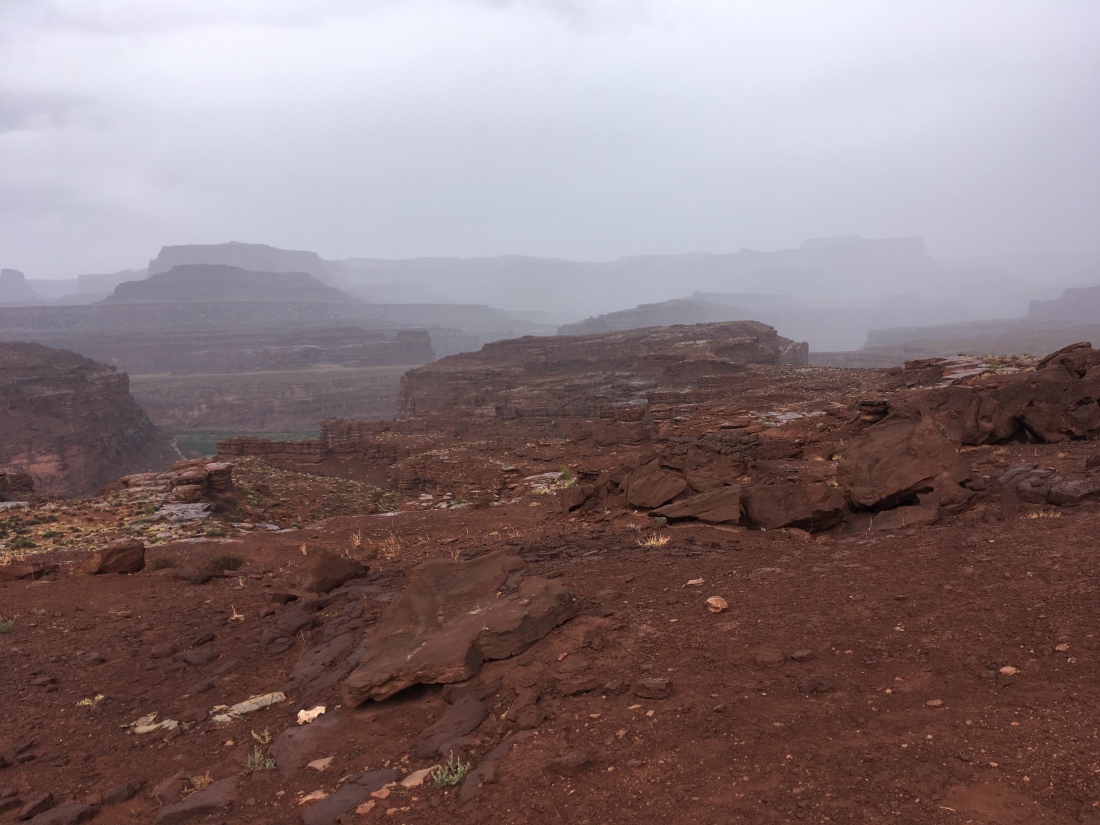 Also, the rain provides more places to drink from the rocks. I’d do a diamond push-up down so that my chest could rest on my hands and my clothes wouldn’t get too wet but I could still suck up the clean rainwater. 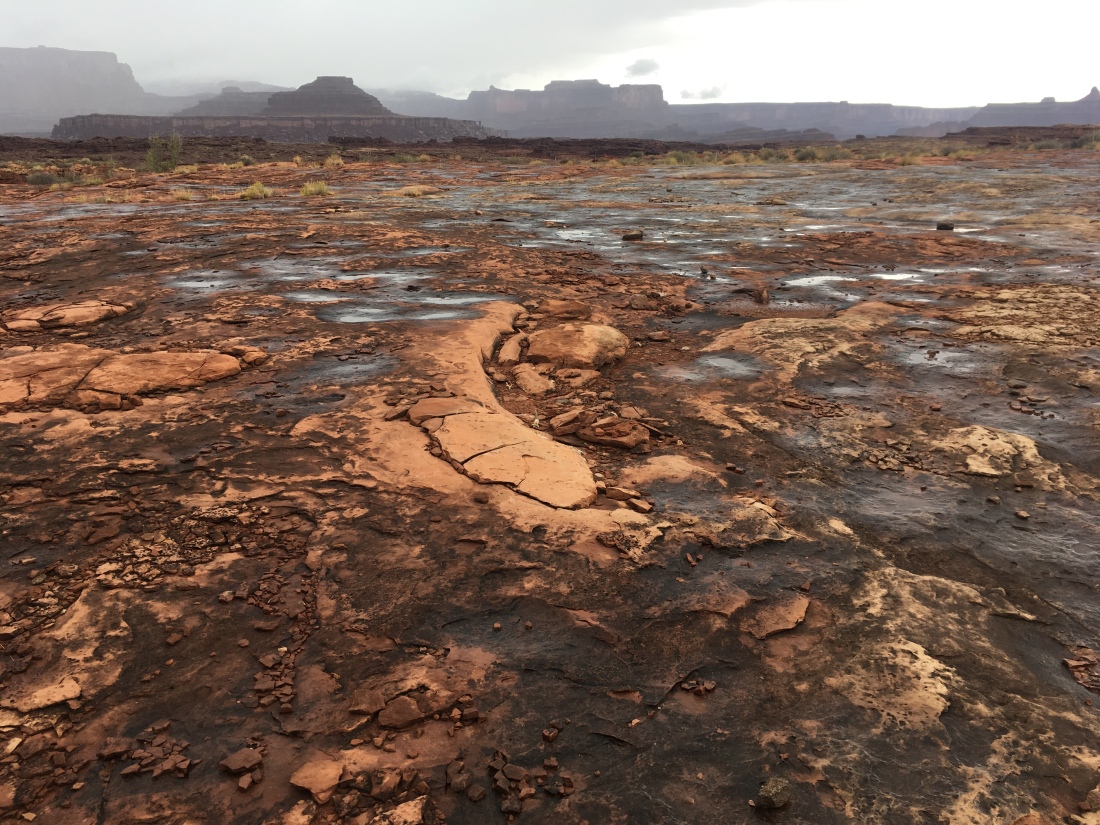 Finally, the big event for the day was finding and successfully navigating (so far) the drainage where the Hayduke leaves the 4×4 track. I’m not in Lockhart canyon yet but as someone not familiar with off-trail travel, I couldn’t believe it when the “forming wash” as the guidebook called it, actually started to go (ie was passable). On approach, you can see huge cliff bands which seem like they would quickly block any exit from the 4×4 track so you don’t quite believe that the drainage is going to be hikable but it is. I’m still expecting to hit those cliff bands eventually but I’m far enough that I expect the guidebooks to work at that point. 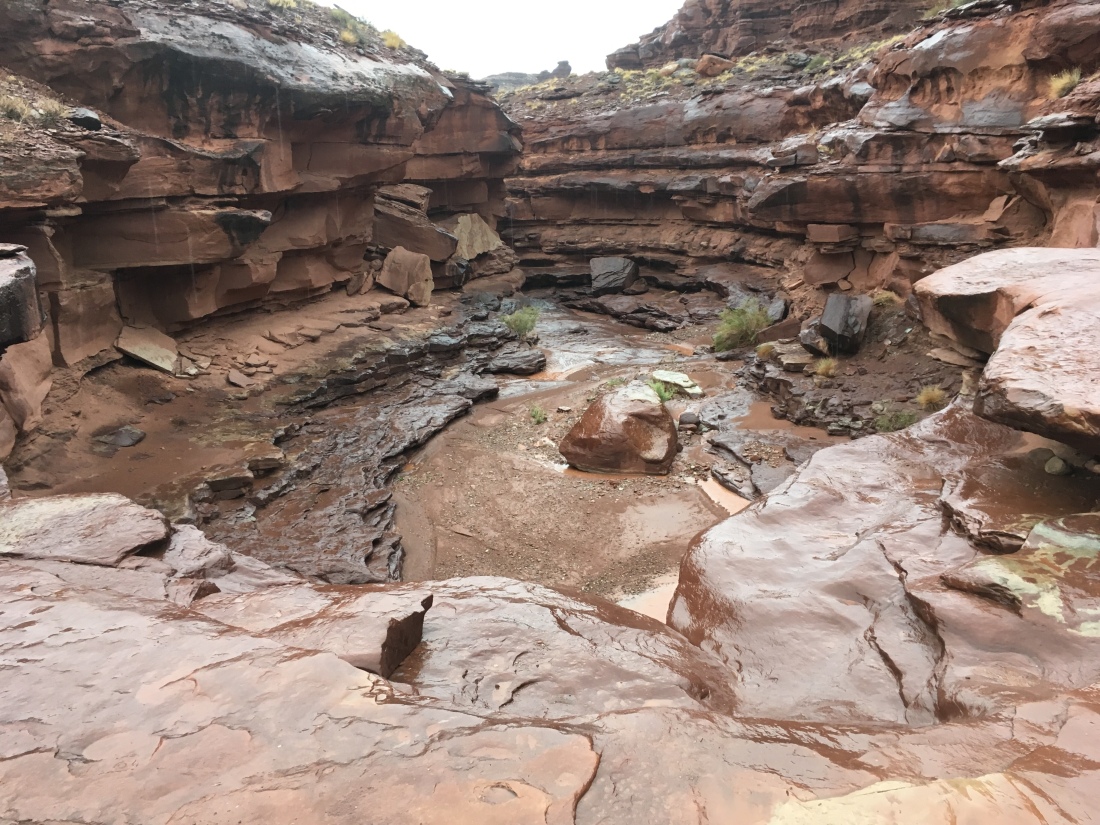 I found an overhang under which to camp for the night. No need to set up a tent. It’s on the high side so no worries about flash floods. 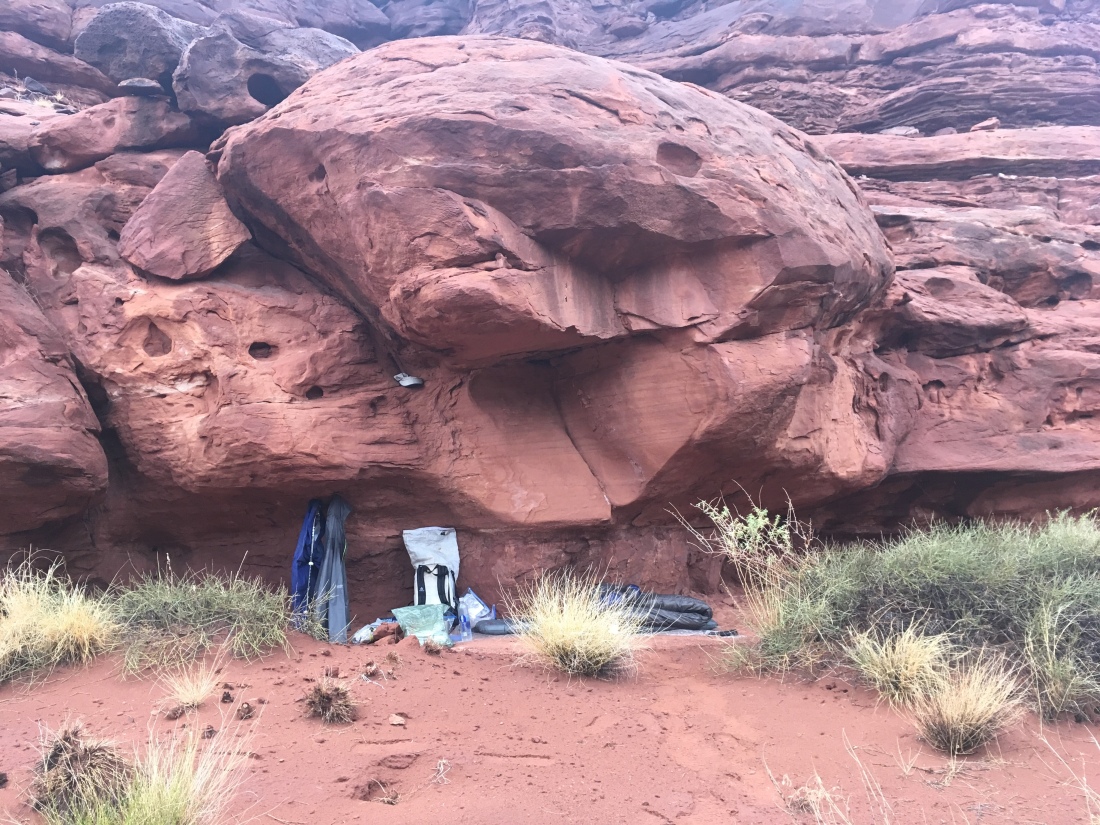