I can’t believe how much happened today. I had to look backs my previous post to know where to start.

My alcove was pretty cozy last night. At one point drops started pooling on the roof near my head but I just had to move a few inches and it as only when the rain was the hardest.

I suited up for a proper rainy day from the get go. While it was wet much of the morning, things never got going very hard and most of the afternoon was dry, even sunny for a moment as I was climbing out of Indian Canyon. 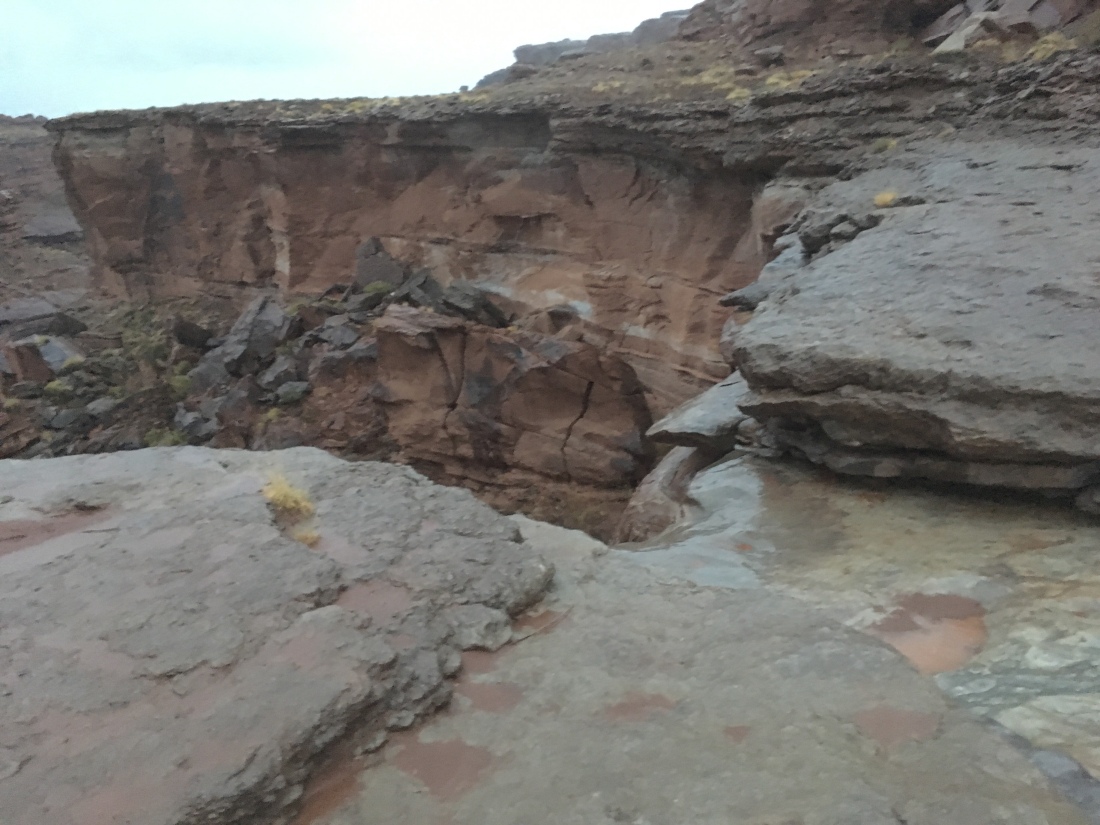 The big pour off was obvious as was the bench across which the route. What learned next was that “desert” means land of red waterfalls. 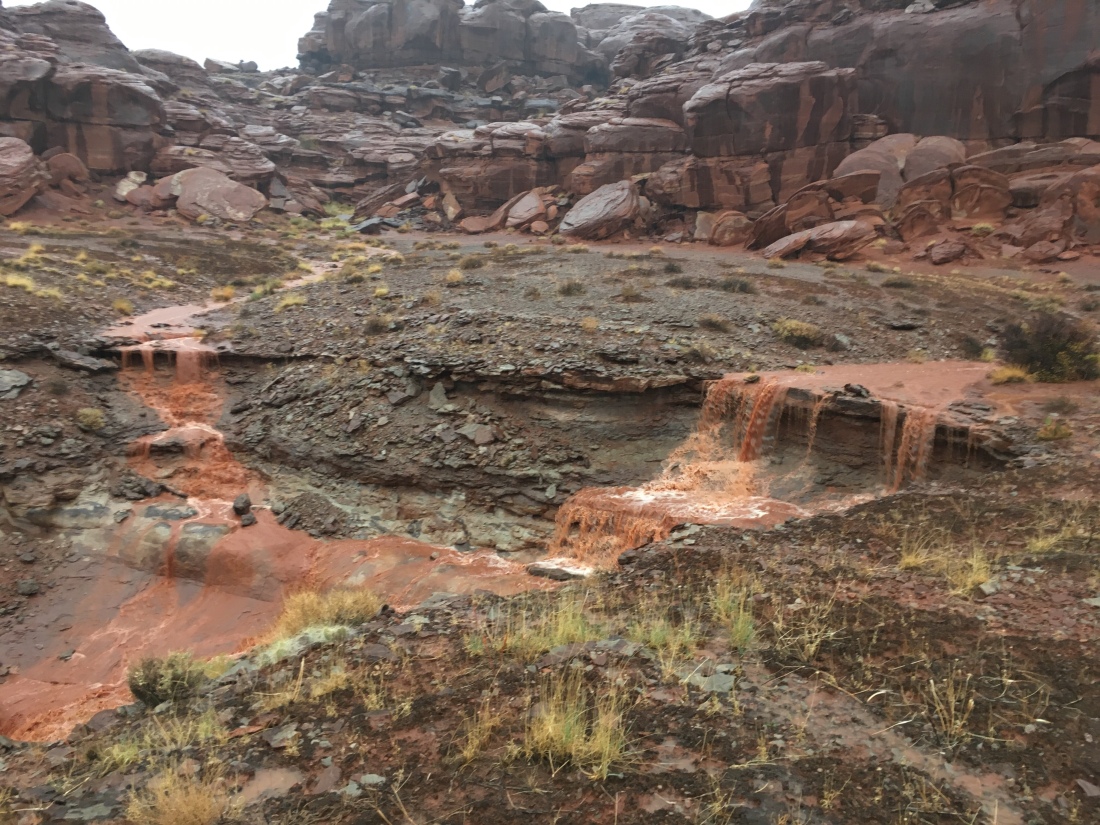 I’d been worried about the descent into Lockhart Canyon with the water flowing in the same places where I might have needed to climb down something but these were unfounded. The turn-off into the canyon was easy to spot and the whole experience was quite pleasant. 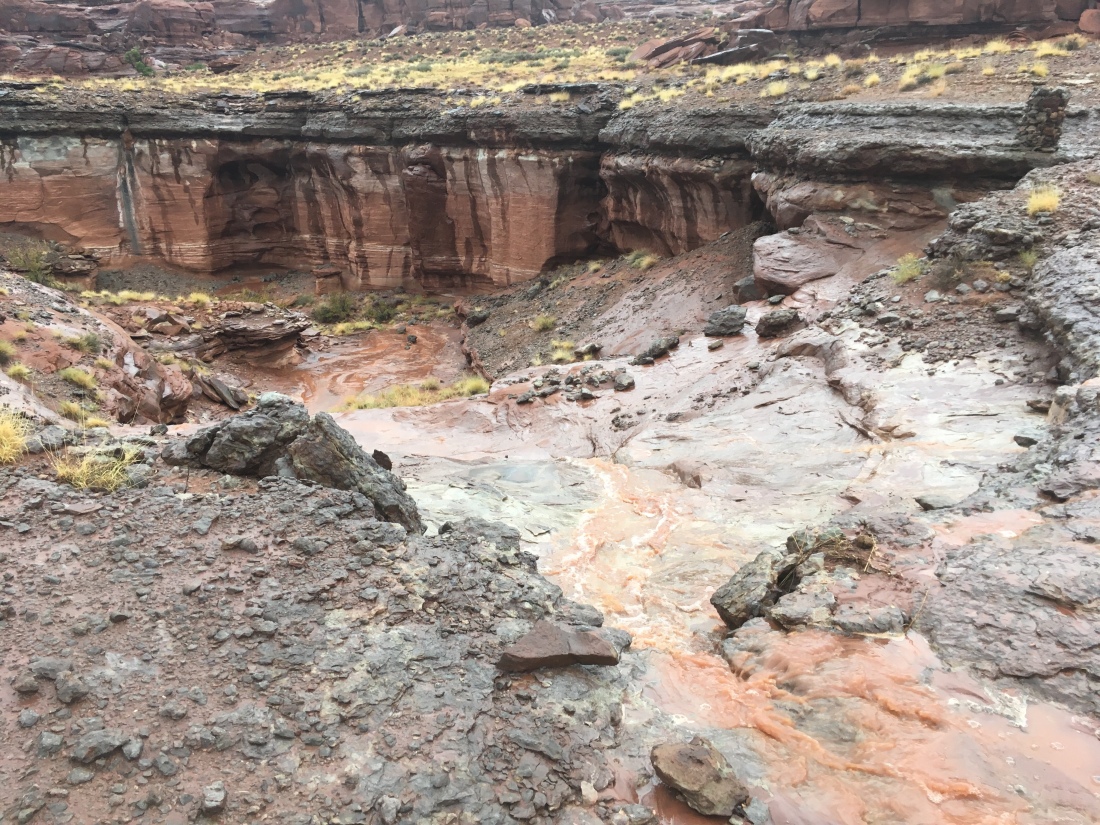 I had put on neoprene socks this morning thinking that it as going to raining all day. Instead those came in useful at the frequent stream crossings as the Jeep road at the bottom of Lockhart Canyon crosses it frequently. 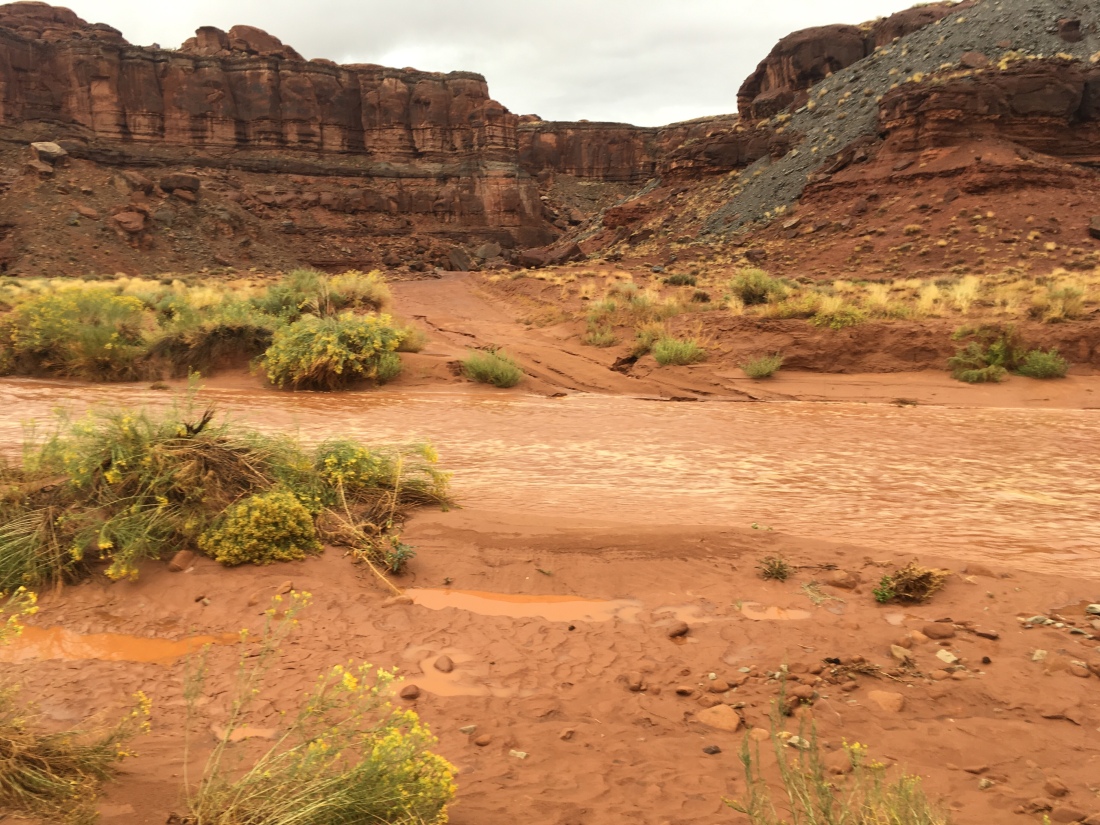 The road walk to the drill bit was muddy. I don’t thinks this road is almost ever actually used despite being in great shape because my footprints were deeper than any rut.

On the descent into Rustler Canyon, I got stuck because there’s a pour off you have to bypass and I didn’t see the bypass immediately.

After that it was mostly a pleasant, if slippery and muddy walk. Neoprene socks were definitely a boon.

Then I came across this plunge hole. I thought it might be like the previous pour off and looked for a bypass. It turns out the guidebook says to go down through the hole. This is the scenario I had feared: having to climb down where water was flowing. I removed the guy-lines from my tarp, attached them and a single line to my backpack. Then threw the loose end down so I could pull the pack after me when I climbed down. It turned out to be quite easy as the rock was easy to grip despite being wet and the shelves you use to clamber down weren’t quite as far apart as they’d looked. 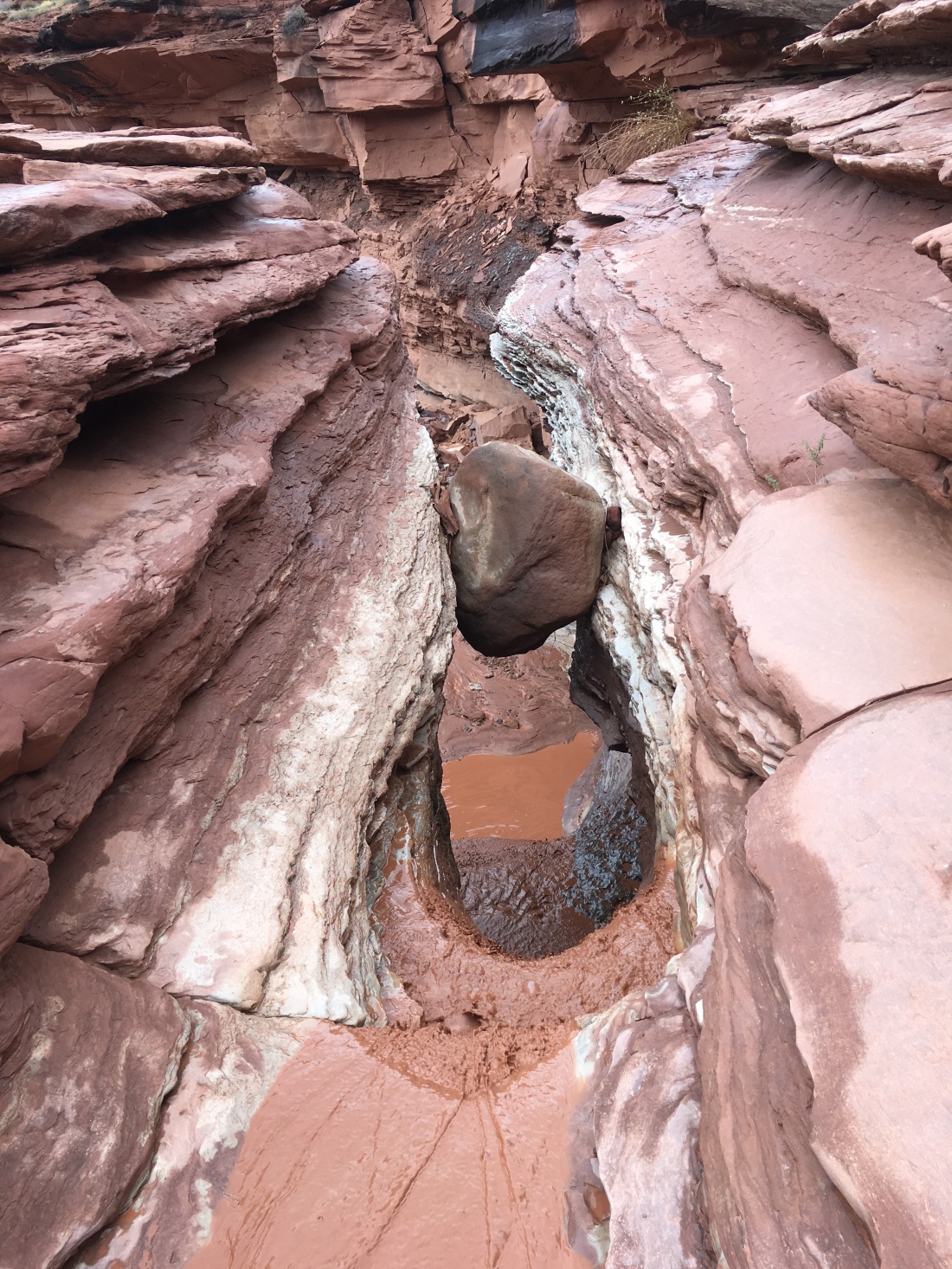 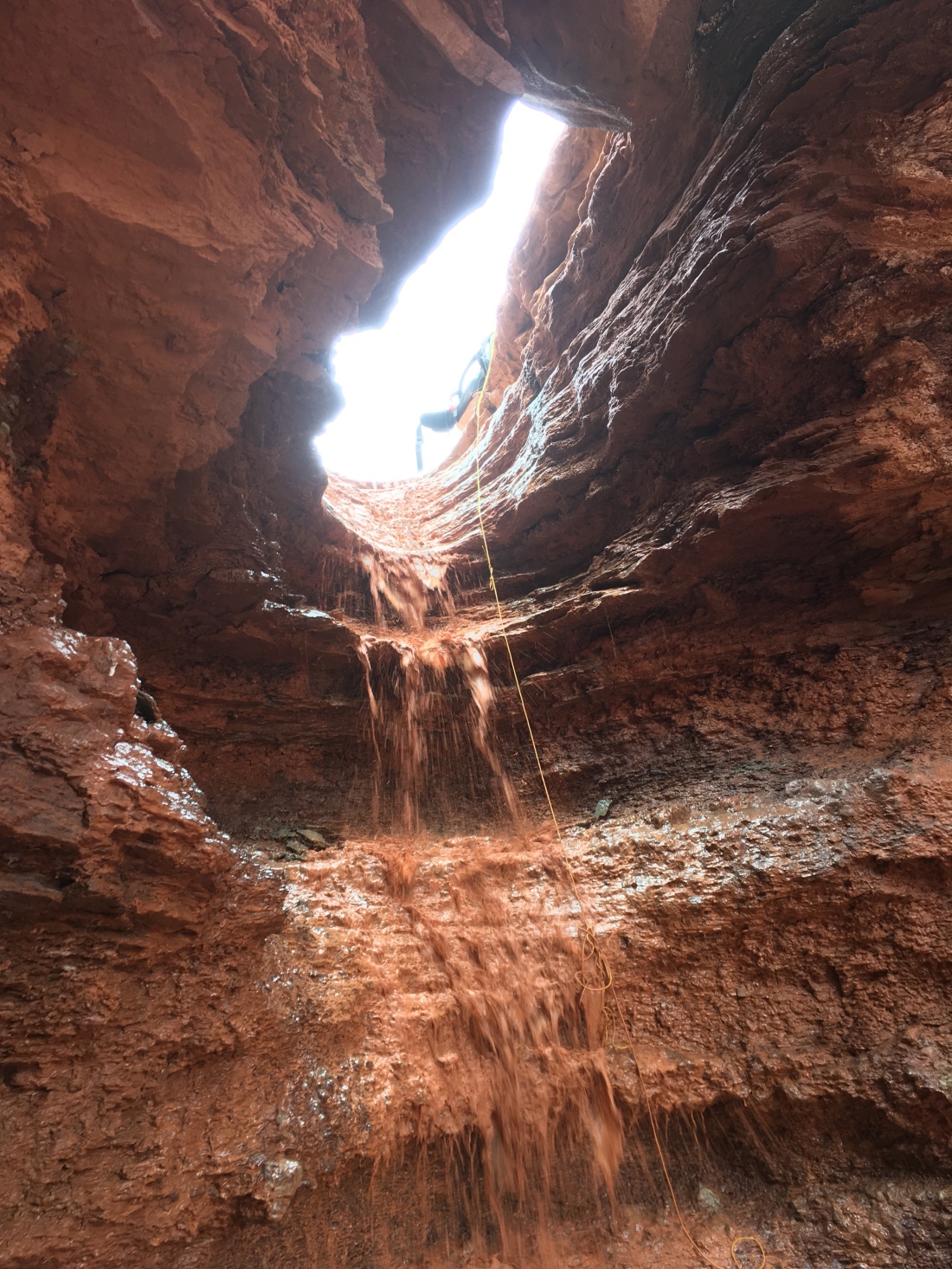 From there Rustler Canyon was a cake walk.

On meeting Indian Springs Canyon, I had a foot step in sand which was at water level and sink almost to my knee. I moved pretty slowly after that. 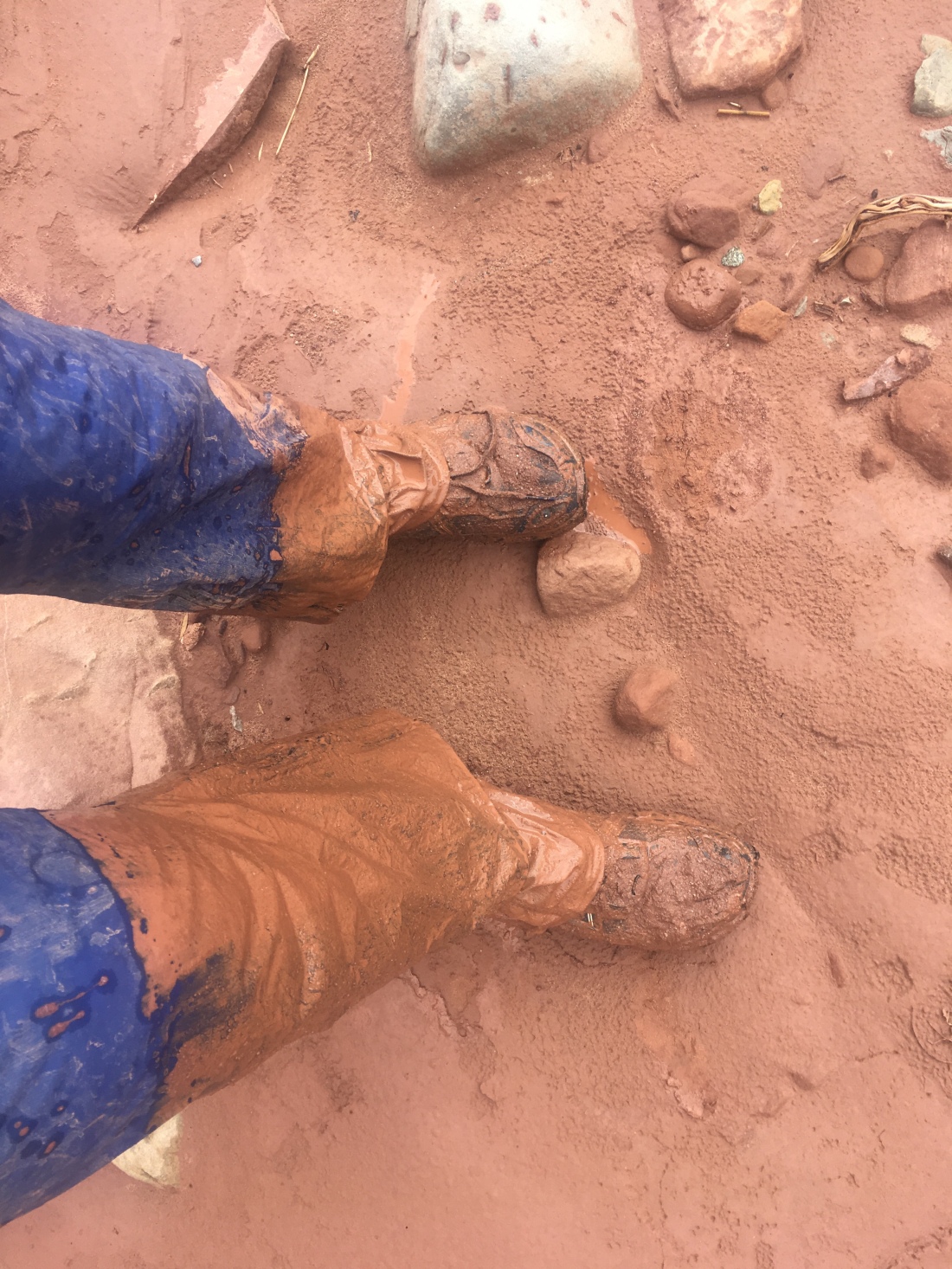 At the eastward turn where you exit Indian Canyon, I drew water and started trying to find my way up the series of ledges the guidebook mentioned. The way up would frequently be visible only once you were right under it. This was disconcerting because I couldn’t tell if I’d gotten high enough to start contouring which is the next step in the guidebook. I spent a great deal of time trying to figure out where thing were supposed to go but was worried about exploring because in the thin, sodden soil. I was leaving deep footprints and as I frequently use footprints as guides and confirmation, I didn’t want to leave a wrong step to confuse others. 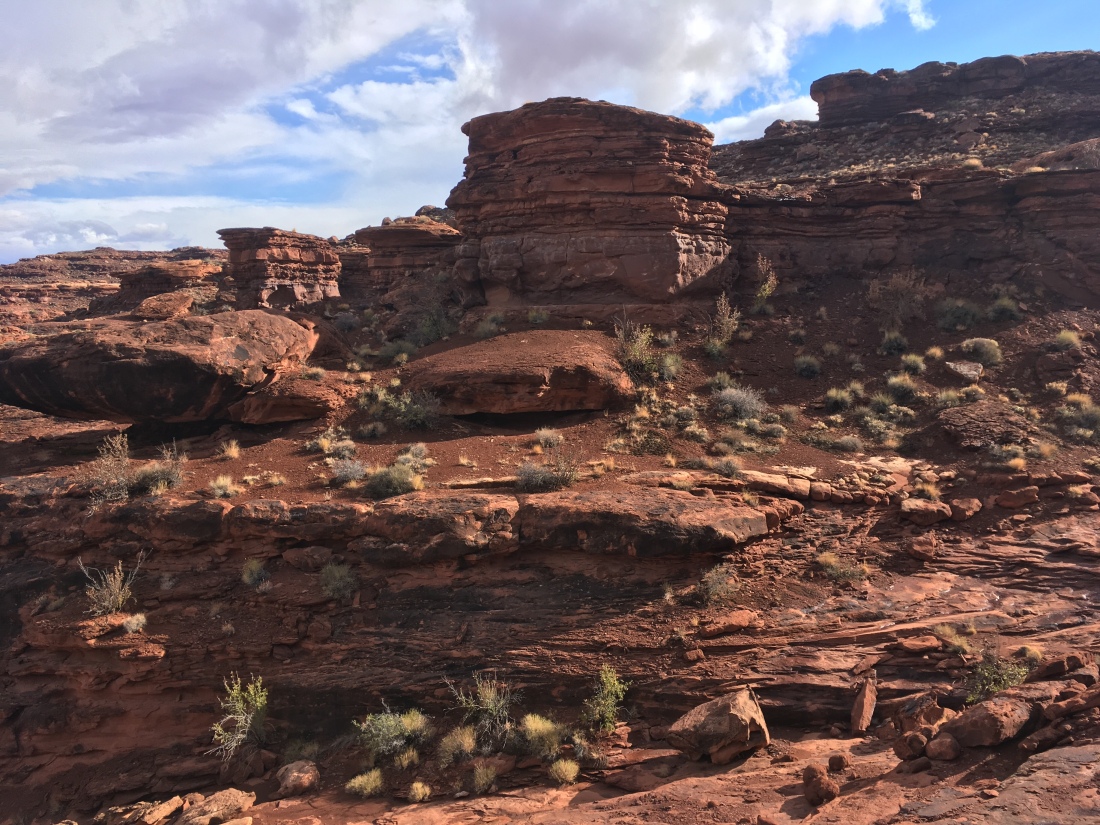 I’d just gotten past the second of what wound up being a many-stages process when the sun came out. While it hadn’t been raining constantly, it hadn’t been dry either and I was good to strip off the rain gear and let my feet dry. I was also able to replace some of my muddy river water with clean rain water from depressions in the rocks. 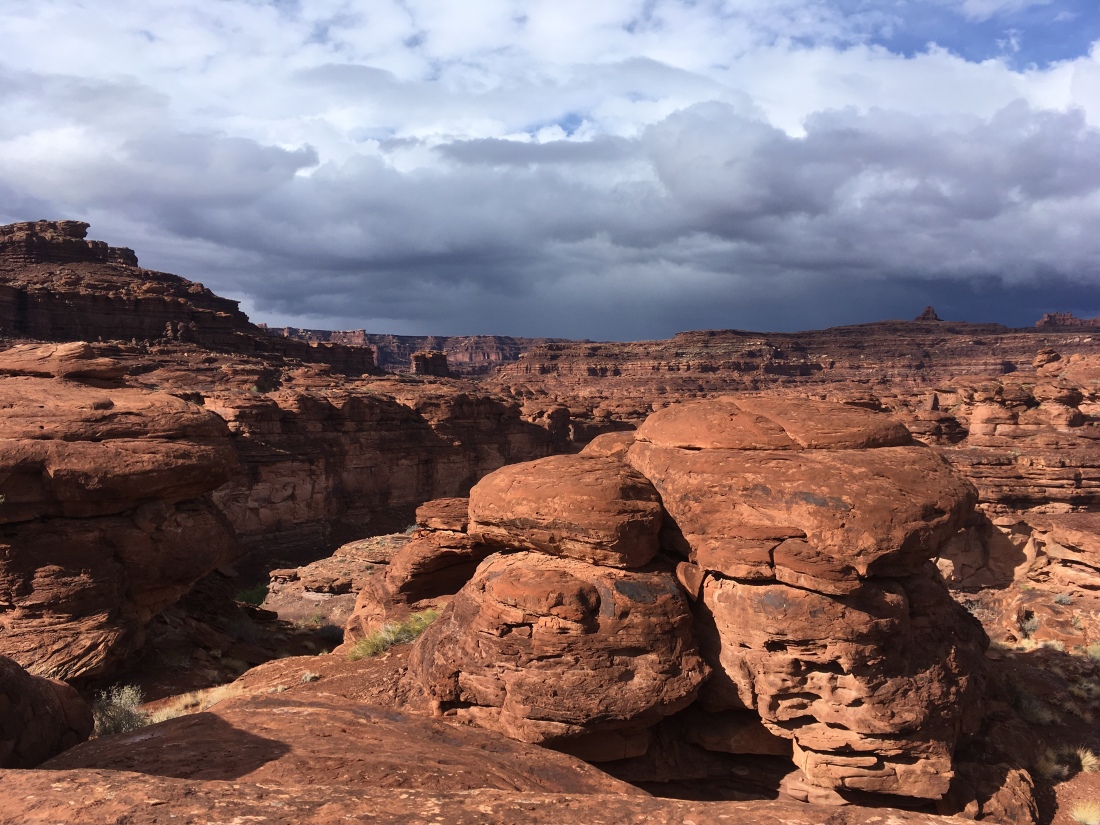 Today closes with me somewhat unsure of where I am. The topography has been hard to align with the map and not wanting to make missteps has worn on me. It has taken a long time to go a very short distance. In one instance I shoved my pack through a crack between two rocks and had to work my way up after it which marks the first time I’ve used a climbing move. Immediately after that, I had to get on top of a large rock by bracing my feet in opposite rocks. Probably not a big deal for climbers but it feels like I’m playing a very different game. 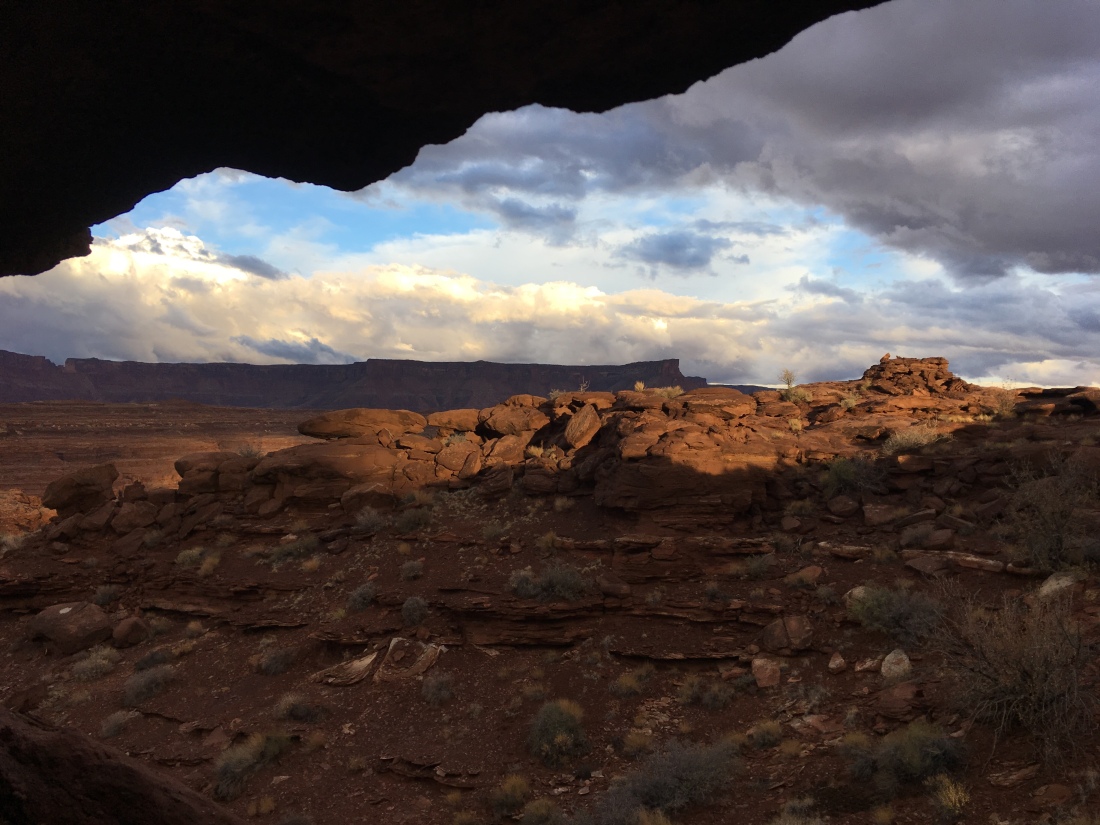 At this point I’m about as high as I can go and decided to find some place to camp since large dark clouds were blowing in to replace the playful white ones. At that point I realized that all the “dirt” (half-dry mud and gravel) on which I could pitch my tarp was too shallow for stakes. So after some desperate searching, I wound up in another alcove, this one not so nice as last night’s: thing and sloped to roll you out. Fortunately the clouds haven’t lived up to their potential. Hope that keeps up.