I lolligagged around for half an hour again this morning. My left knee aches a little and so I wasn’t feeling motivated.

The last bit of Tapeats Creek was mostly trail on the bank with frequent crossings. I stopped off at the designated campsite I was supposed to be at last night to use the privy.

On the way up the Thunder River climb, the cairns direct you to the spring not Surprise Valley. I was pretty confused for a bit and even pulled out the GPS which didn’t help other than to say I needed to keep going up. There was what appeared to be a trail up but there were rocks across it and I can’t ever remember a time when stepping over “don’t go here” rocks or branches went well for me. I guess there’s a first time for everything. 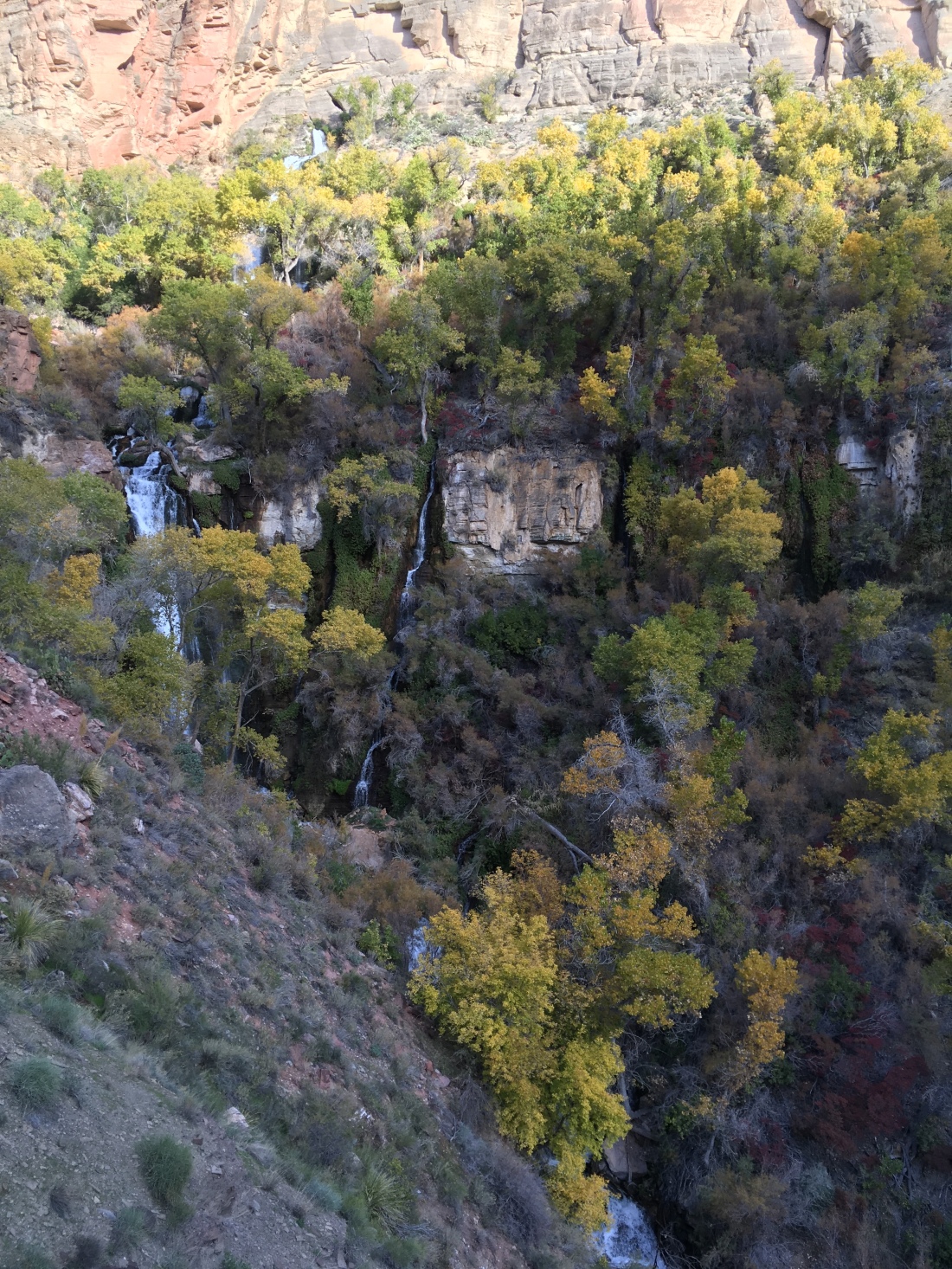 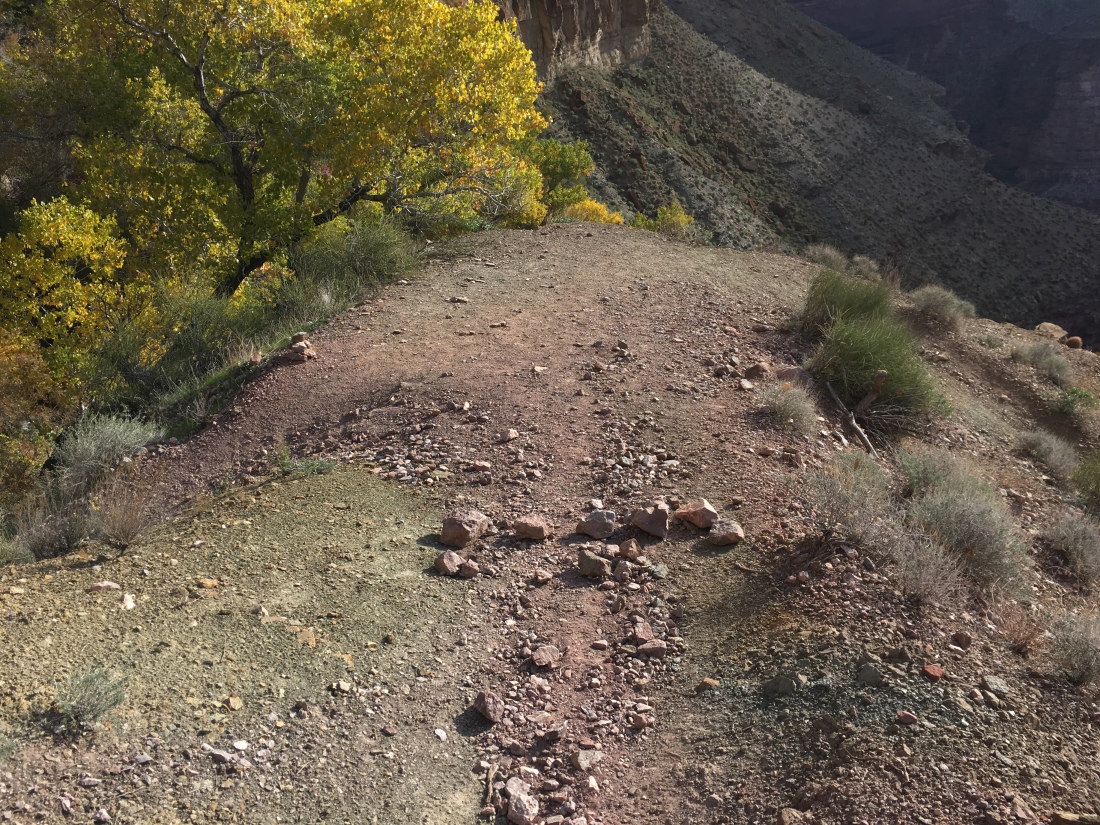 Surprise Valley was pleasant. I like the mid-canyon elevation.

On the descent to Deer Creek I was using my lone good pole to guard my left knee which made going slow. This wasn’t such a bad thing because the trail and view were quite interesting.

Deer Creek itself was peaceful. I ate lunch by a small waterfall.

The narrows over which you walk to the Colorado are out of this world. Deer Creek flows below you and you’re on this narrow ledge where you sometime have to squeeze around a corner to not get bumped off.

Instead of descending to the Colorado River like the guidebook says to, I took a clear use trail hoping it would connect to the upcoming trail which you have to find to get you over some high cliffs. Unfortunately it just dropped to a different beach.

While walking the beach, a rafter at the back of the flotilla which had launched from the Deer Creek beach while I was descending checked on me. I explained that there were supposed to be some cliffs coming up and I was looking for a trail over them then was trying to get to Kanab Creek along the beach. He said it was quite a ways and to be safe then let me go a they were at their night’s camp. There’s a real art to checking on people, especially when they have aggressive plans and he did it pretty well.

In the end. I never found the start of the use trail over the cliffs and scrambled up a steep gully high enough to get above the cliffs. There were many little drainages to go around and the going was slow. Then, just as I reached the ridge running down to the first cliff. I saw a cairn down the ridge just a few yards from the edge. Looking out, I could see a trail following the edge of the cliffs. This kept it from having to deal with all the gullies but would have been way to close to the edge for my comfort were I scrambling. This was a huge relief. 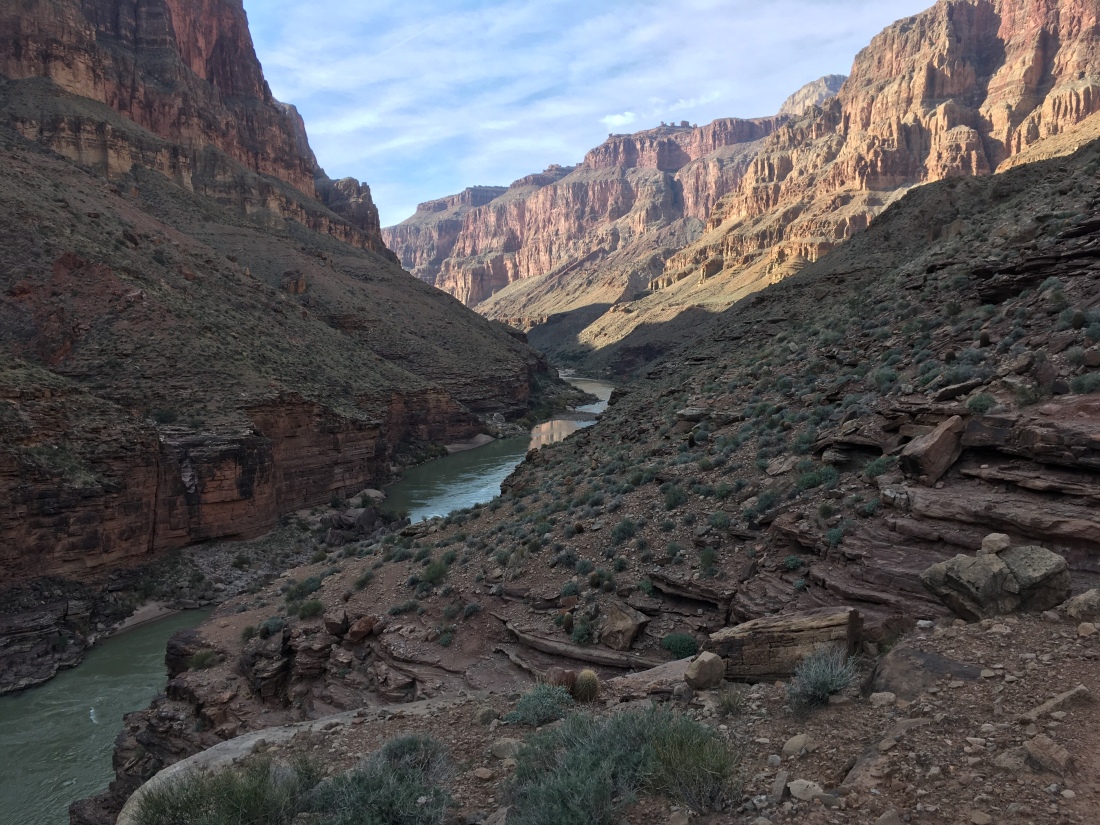 The trail was quite clear and in a few places where it was washed out or there were rocks it was pretty well cairned. You couldn’t cruise but it was easy walking with a few places where you had to navigate some interesting rocks. It’s such an incredible trail and with such beautiful views. I’m quite curious as to its history. 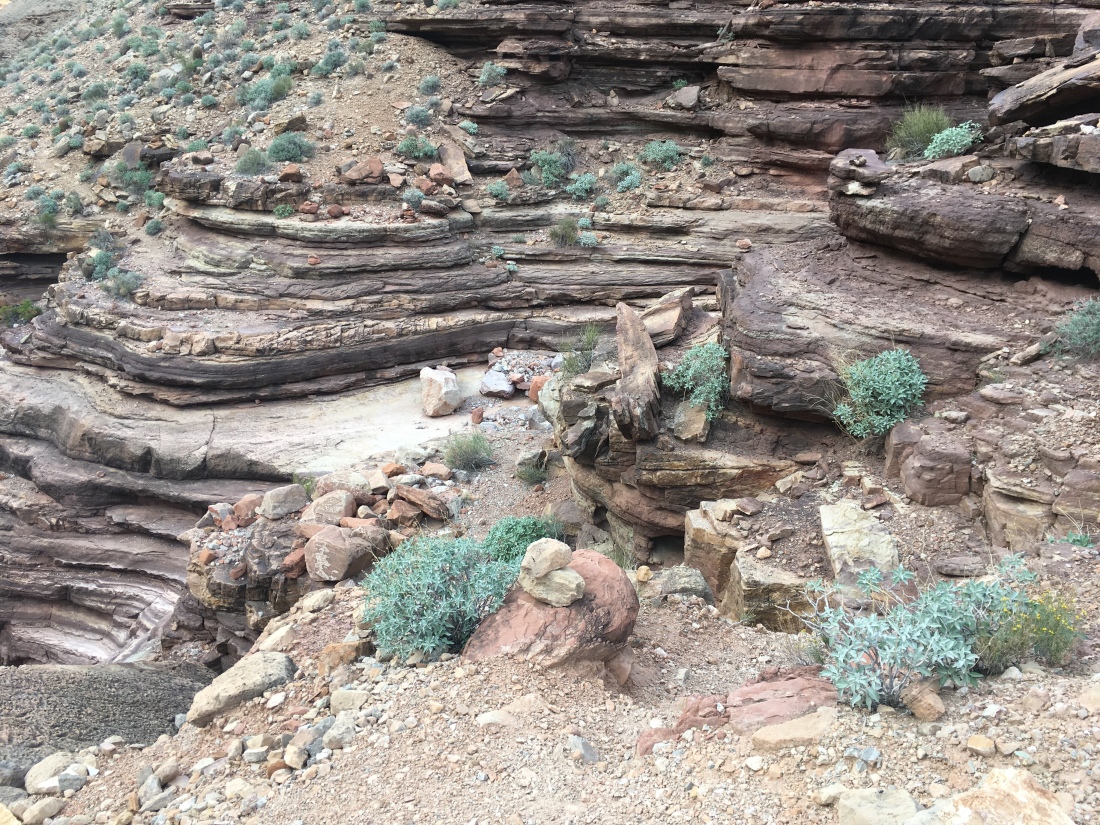 After the short beach walk which meant frequently having to off the narrow, steep beach onto the rockier, plant infested shore above I was at Fishtail Canyon. With a little over two hours of daylight left I decided not to push it the 4.4 miles to Kanab Creek. The pace would be aggressive given the terrain and there don’t appear to be many places to camp en route if night found me part way. I could mostly see rocky slopes under cliffs with little sand down canyon and the map didn’t show any clear outlet stream beaches like it had south of Nankoweap. Stopping early might give my knee a chance to heal up a little but this does mean I’ll need some high mileage days going into resupply. 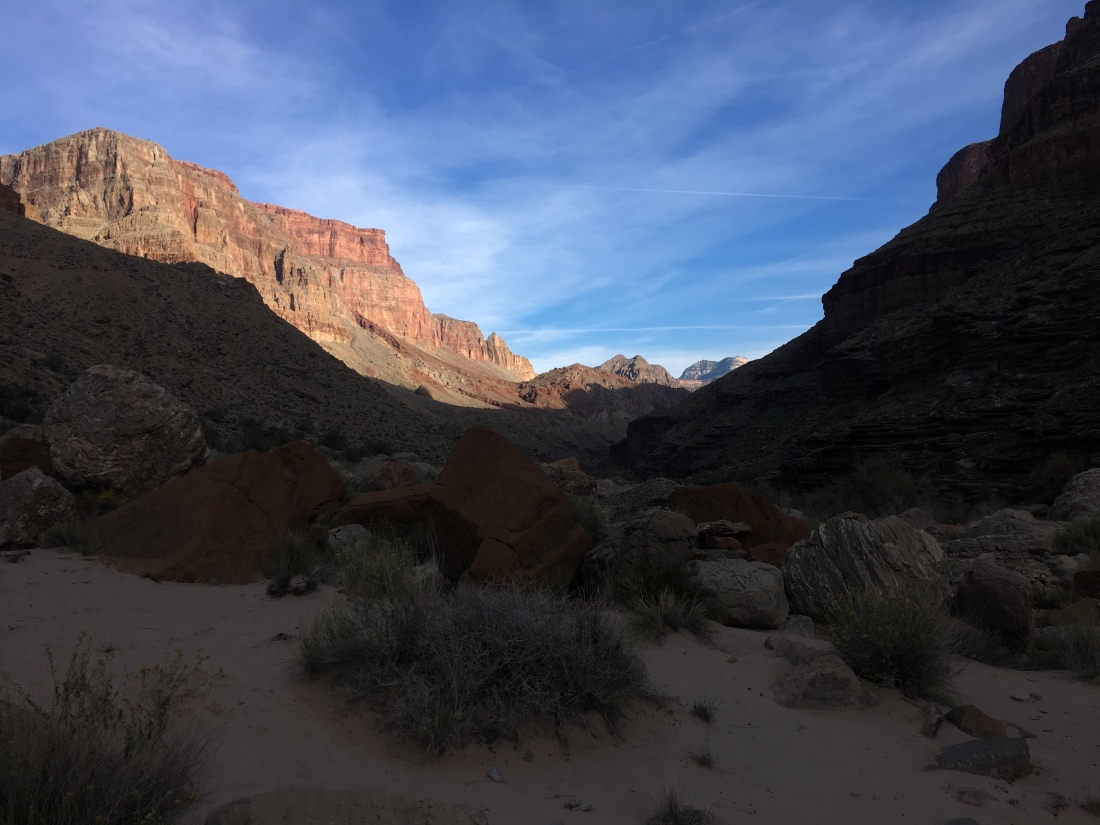