The day started with a hike down the Noatak until we got out of the shade. There isn’t really night here but the sun gets low enough that we had some respite at “night”. Mornings are cool enough to want a mid layer at the start.

Mostly we tried to find game trails on the right bank. A couple of times I made macro errors, like trying to stay in moderate brush to avoid a bog not realizing that the low willows on the other side of the big would make much better travel.

Eventually we got to the valley which would lead us up to Mystery Spot. Pete and I started the ascent the soonest and so had the most gradual climb. We regrouped before starting the last climb and the down-steam view was beautiful. The upper valley was our first real encounter with snow. It wasn’t deep and hid many rocks making deep postholing likely. We stayed in a single file in the snow. Andrew lead which made the steps easier for the rest of us but most still post-holed despite following his tracks. I think I have one of the higher weight to foot size ratios and two people behind mentioned at some point that I found all the post holes for them. 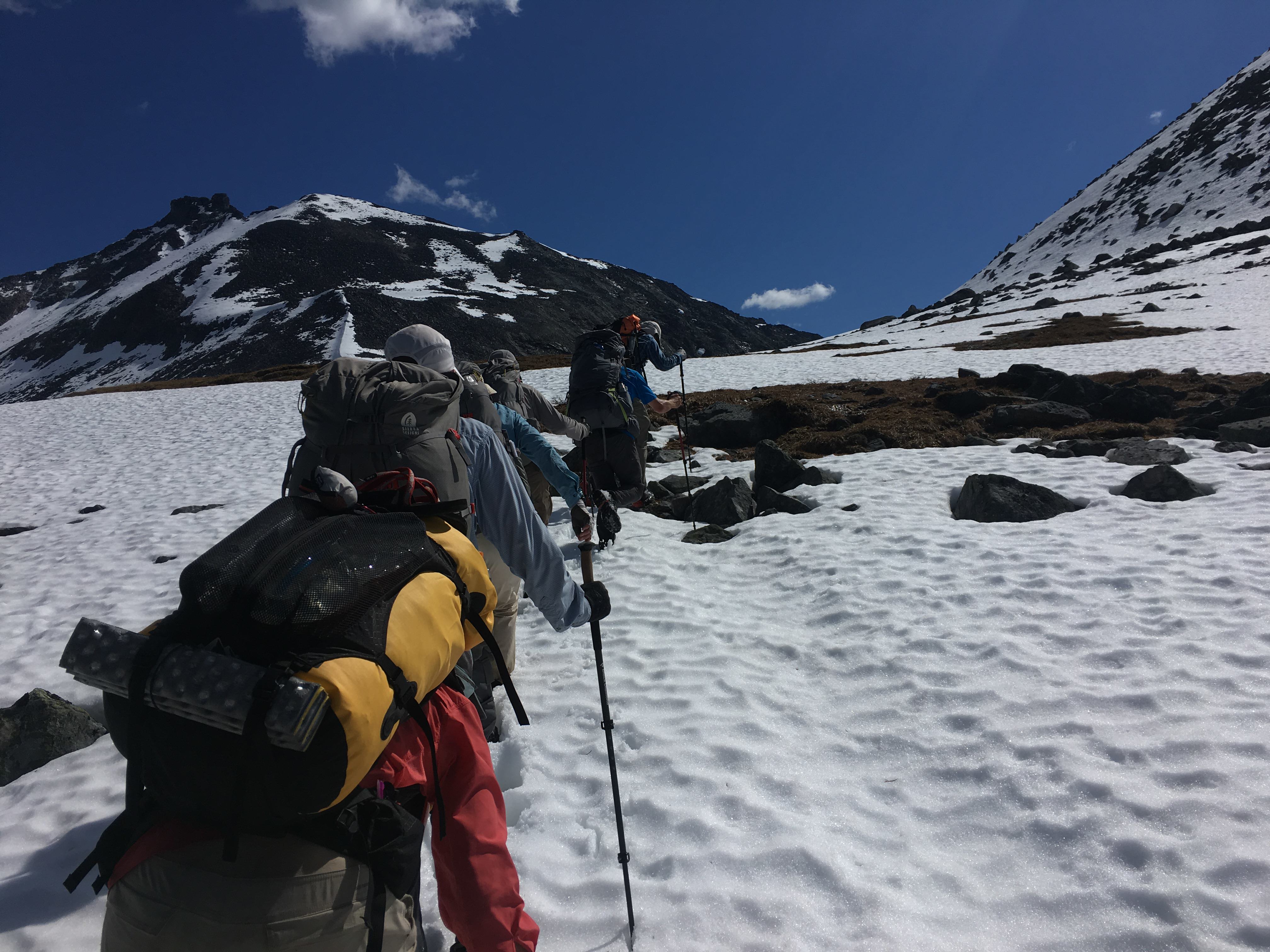 Mystery Spot is probably so named because there’s a low point just after the pass but a walk of talus rises on the far side creating a bowl. The exit from that bowl involved scrambling extremely precarious rock. Andrew explained the geological reason, told us to keep space between people, and call “rock” if anything falls. His speeches are a concise but completely sufficient for the group. It’s really enjoyable to be in a group that doesn’t need to be overloaded with rules to compensate for bad judgement. People ask questions, sometimes multiple times if people had a hard time hearing or were going at their own pace or were too far away to hear some commentary. 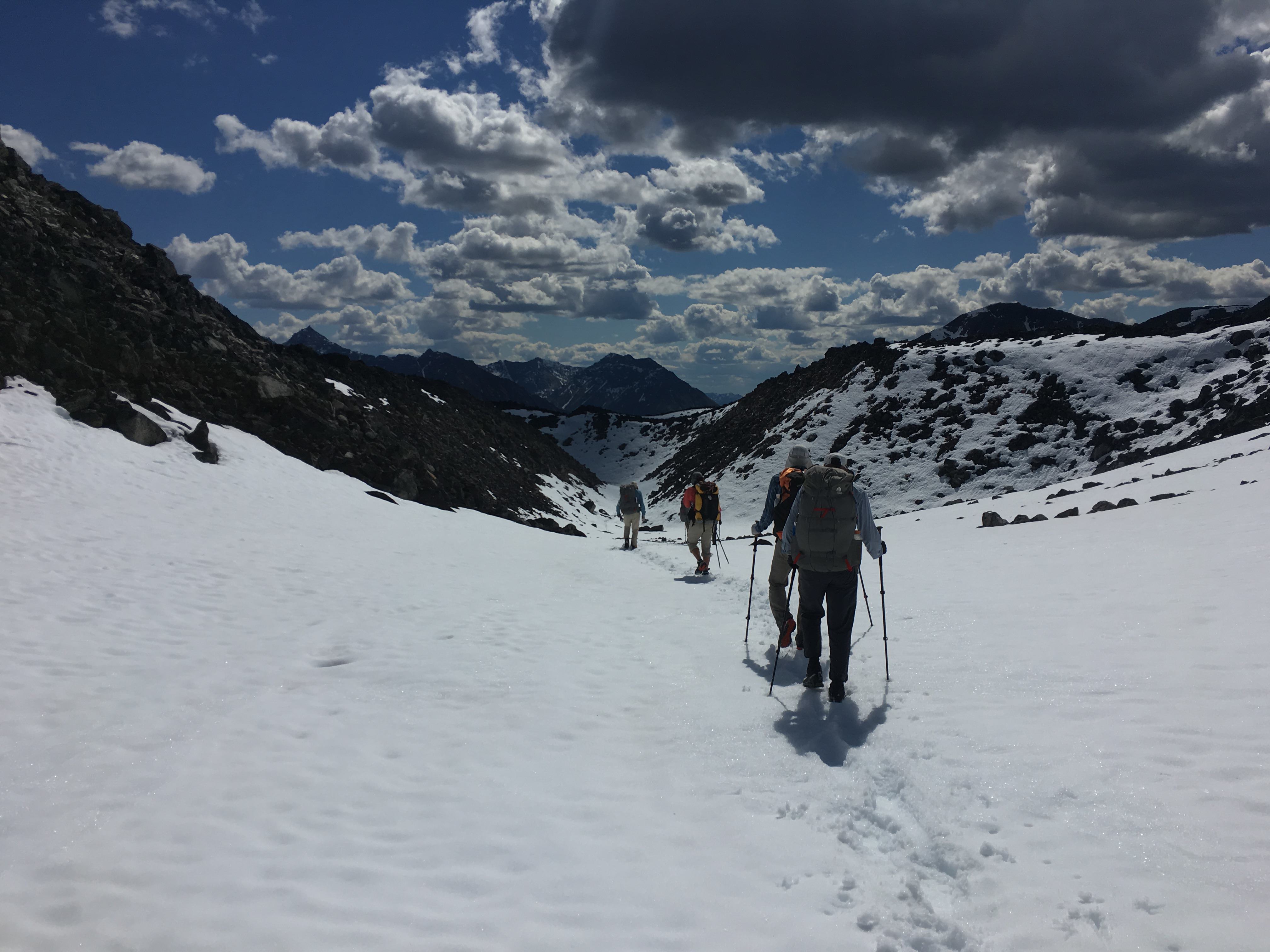 The descent from Mystery Spot was quick once we got past the rocks. Lance was out front moving quickly and easily but still having time for photos. It was around 4pm when we had an official lunch. There had been snack breaks but not enough for me to break out the PB&J. I really enjoy that this group can take care of themselves, keep their energy up, but still express their needs. Today, the natural time for a lunch break was pretty late and there were some grumbly tummies but that was ok. 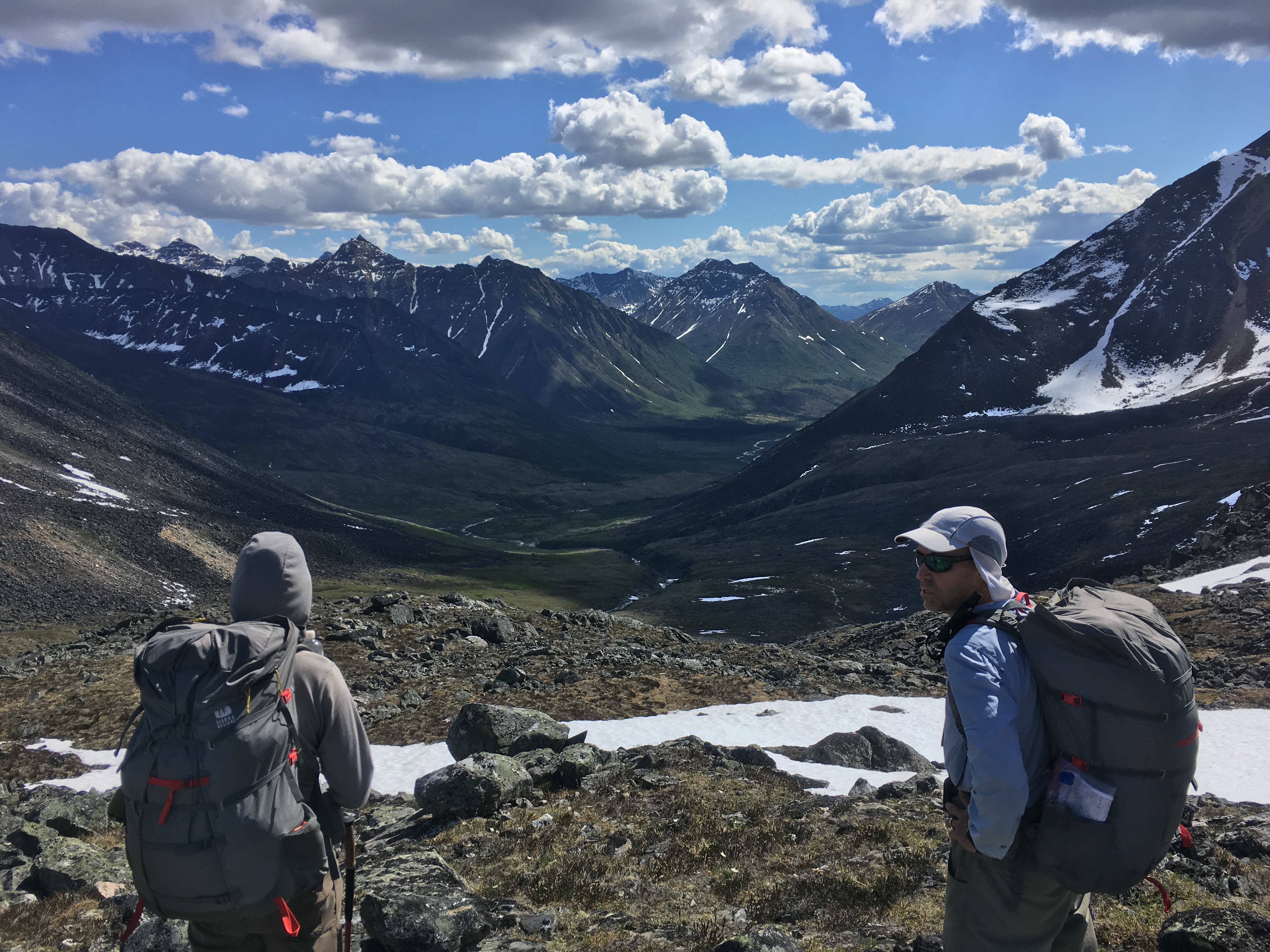 I don’t have an altimeter and so almost descended too far. The plan was to contour at a certain elevation across a creek to get under the next pass. Plans are always up for redefinition given the situation and there are many judgement calls to make. Since our ultimate destination was up I ascended to get above some gullies which intersected the contour. This took a bunch of the group well above the line Andrew picked and we had to descend a few hundred feet to the creek were part of the group had followed him instead of running ahead. He keeps a loose leash but it might have been a little too loose time. Ultimately it was clear that losing the elevation only to regain it on the other side of the creek was better than contouring way up the valley in tougher terrain. In some ways this should have been obvious but in a large group which regularly spreads out, I’d put too much weight on a strict definition of the plan instead of reconsidering what would be best and challenging the plan. Group dynamics can be difficult factor in navigation, especially when we’re prone to make mistakes. I think I wind up in front a lot because I’m more comfortable being wrong but it still doesn’t feel good to be wrong. 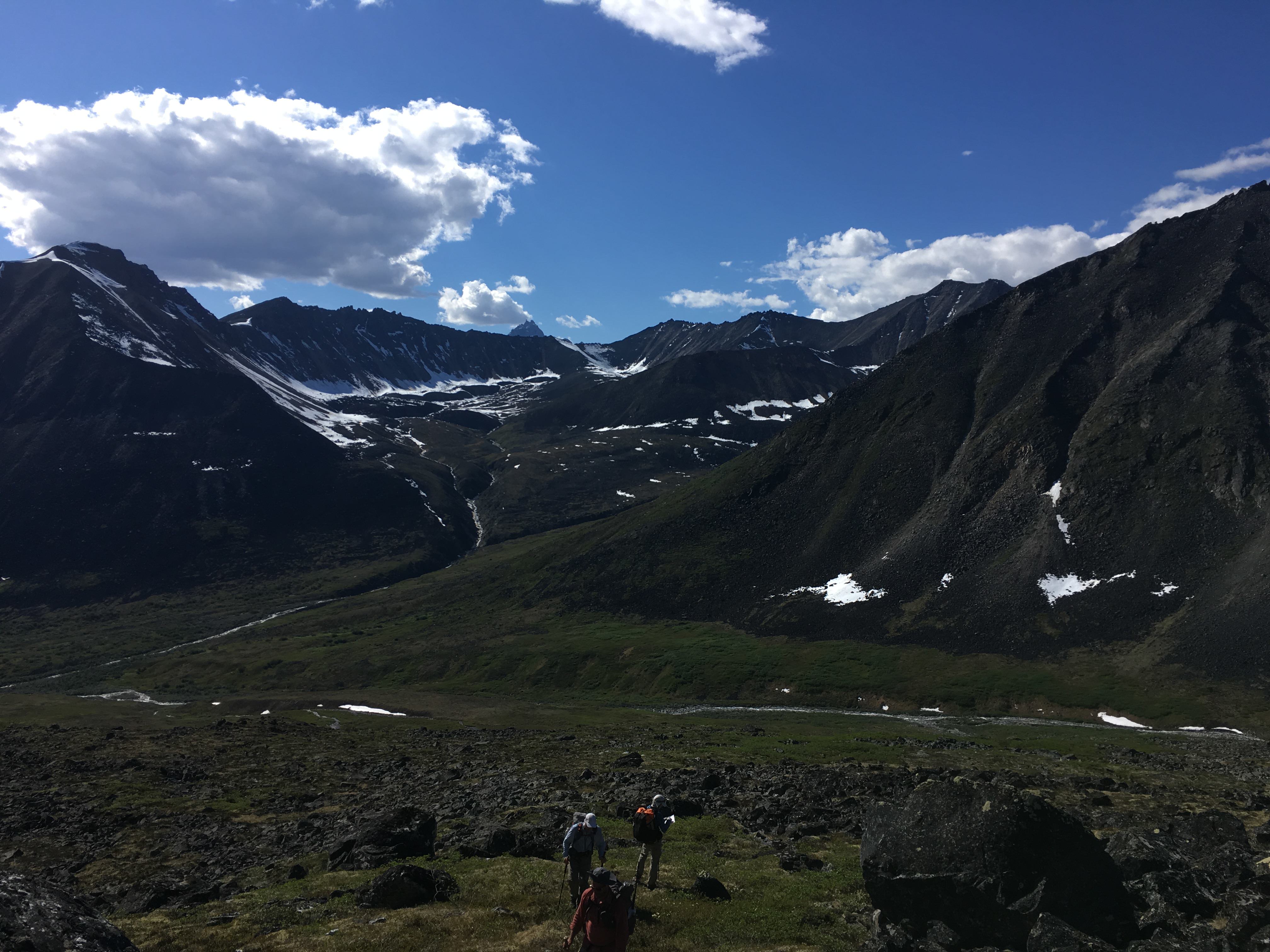 Our last leg of the day was up a steep hillside next to a creek which flowed elegantly over exposed rock. I was tired of making navigation mistakes and so took an easier pace up the hill. There was a break at the top of the hill looking up at the complex talus fields which lead up to the pass. The map showed 4 lakes hidden from view above us which was strange given that everything was made up of rocks at least 6 inches large to boulders. It seems like it would be hard to make a watertight seal to hold a lake because water would find its way through gaps between the rocks. The group was ready to be done and so we camped at the first lake we came to.

The surrounds were stunning: high jagged rock walls painted in places with red lichen above a clean shallow pond. Dinner was Thai Peanut noodles and it was delicious. It was probably also the first dinner I’ve seasoned properly. 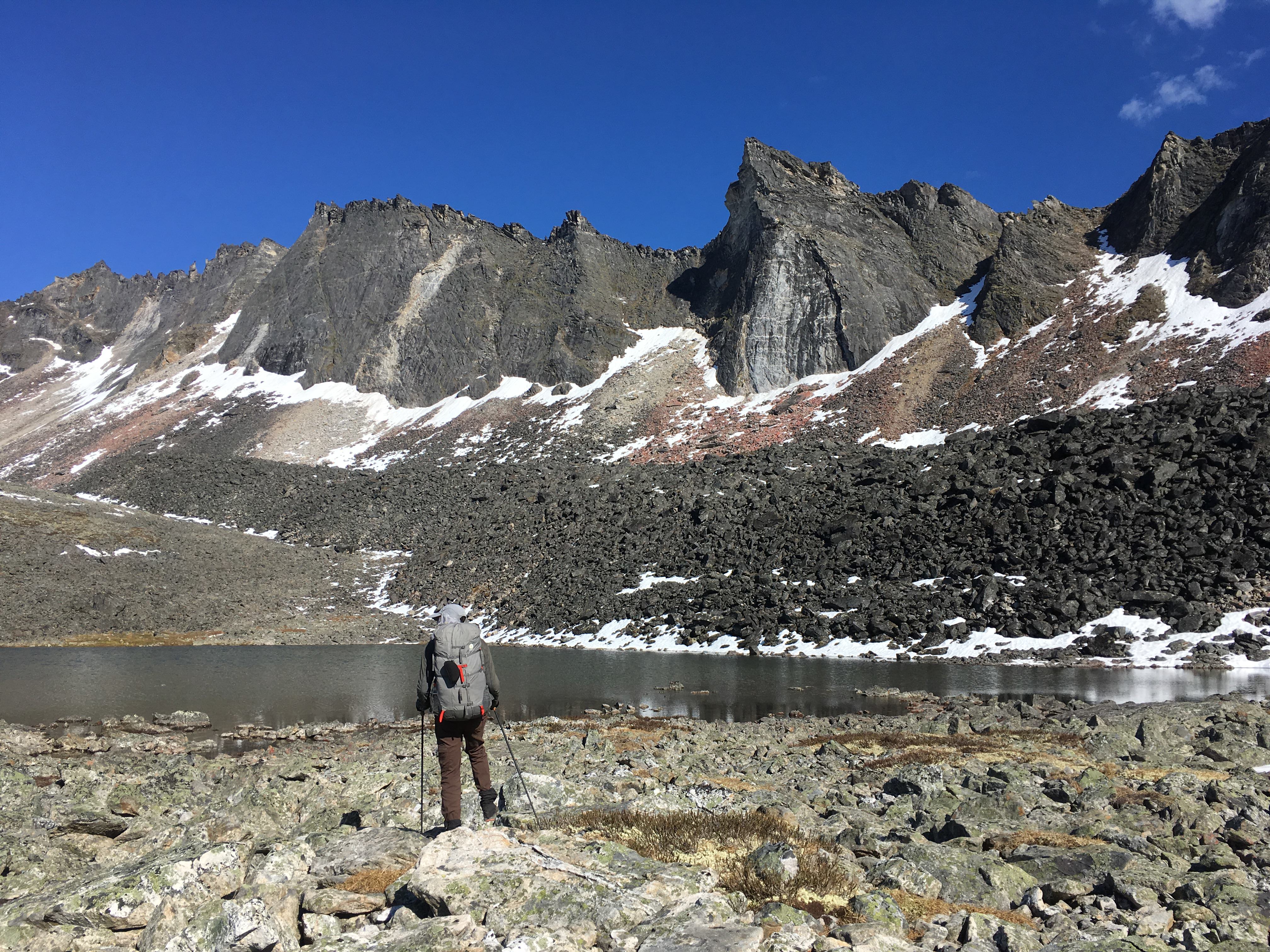 Over dinner, one of the discussions was about how to convert a gradient (feet gained per mile) into the angle of a slope. Pete had a simple formula and I objected on the ground that the units seemed wrong and eventually said it seemed like it should involve and arctangent. Somehow I got labeled the math nerd despite Jeff and Sonja remembering SOA CAH TOA properly, Drew being able to compute examples we could use to compare, and John wanting to get calculus involved. It’s actually kinda cool that people didn’t just check out the second math came up; the group seems to be composed of people who engage with interesting challenges whether they’re intellectual or physical.