We started straight up a hill. It’s kinda nice to just go straight up with no trees or brush in your way. No switchbacks to drag things out.

At the top we wrapped around to the right on a steep side hill above a drainage. This would have freaked me out on the Hayduke but with good company and good shoes it was pretty fun, even with cliffs below. 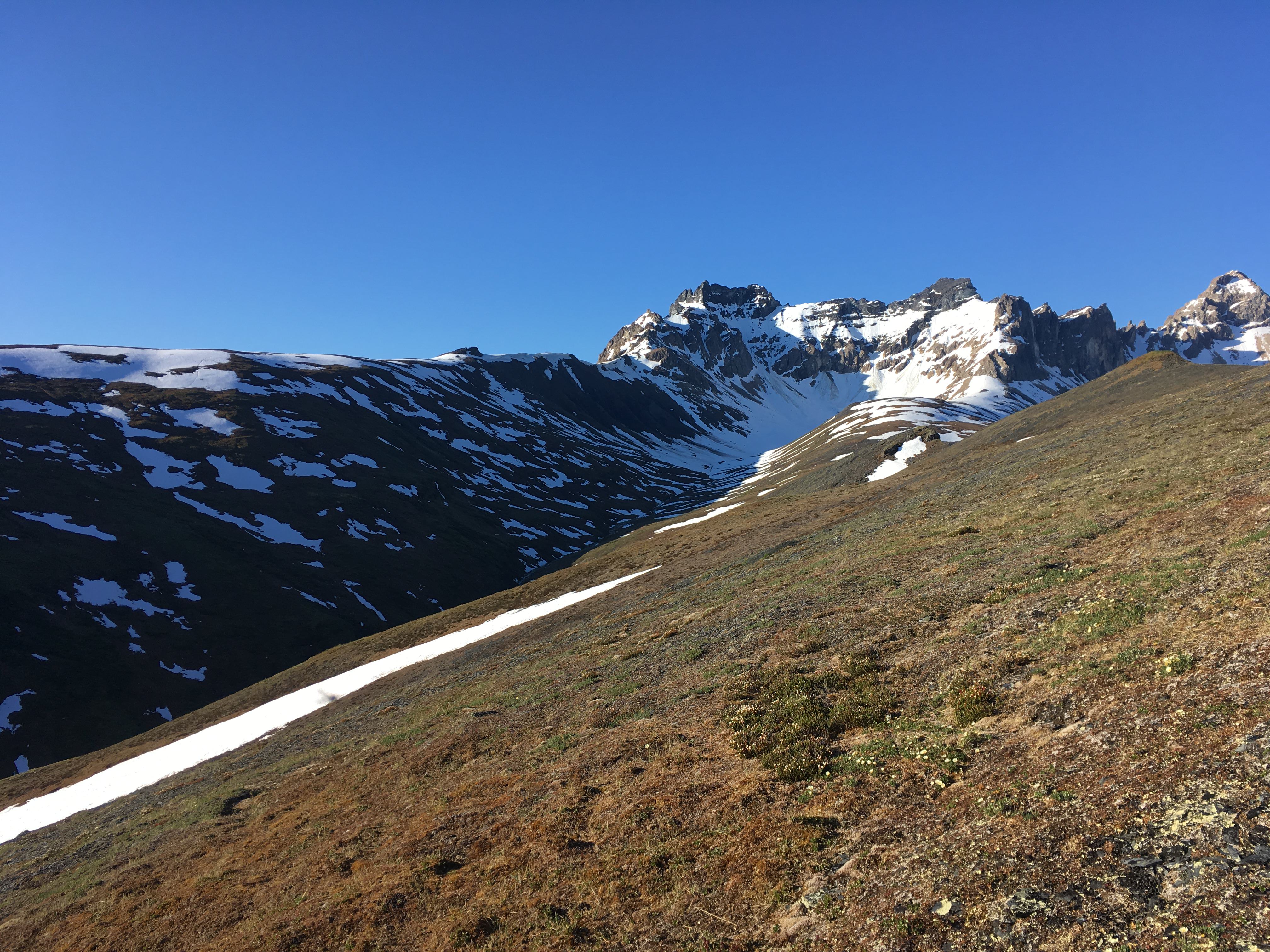 We ate breakfast in the sun just above the river. This was something like chia seed oatmeal and was delicious.

The climb up to the opposing ridge was quick but steep. A small snow patch at the top was initially stable but most of us wound up postholing knee deep and Drew wound up crawling the last few yards because it was so annoying to punch through. We’d received word from another group that there was still snow on some of the passes which we’ll be doing in the next few days.

The descent to a tributary of Angayu Creek was steep and soft. The brush at the end took some navigation.

Getting down the tributary of Angayu Creek required a lot of finding our way through brush on game trails. It was fun to spread out and follow different “weaknesses” in the brush. If your particular opening dead-ended, you’d just double back and follow whoever had the best trail. In practice there were never more than three groups but shouting back and forth and seeing what went and what didn’t was exciting. Andrew has to push us to try take chances and be ok if one particular line didn’t work out. Still, it was hard to take a lead when you weren’t really sure where to go. 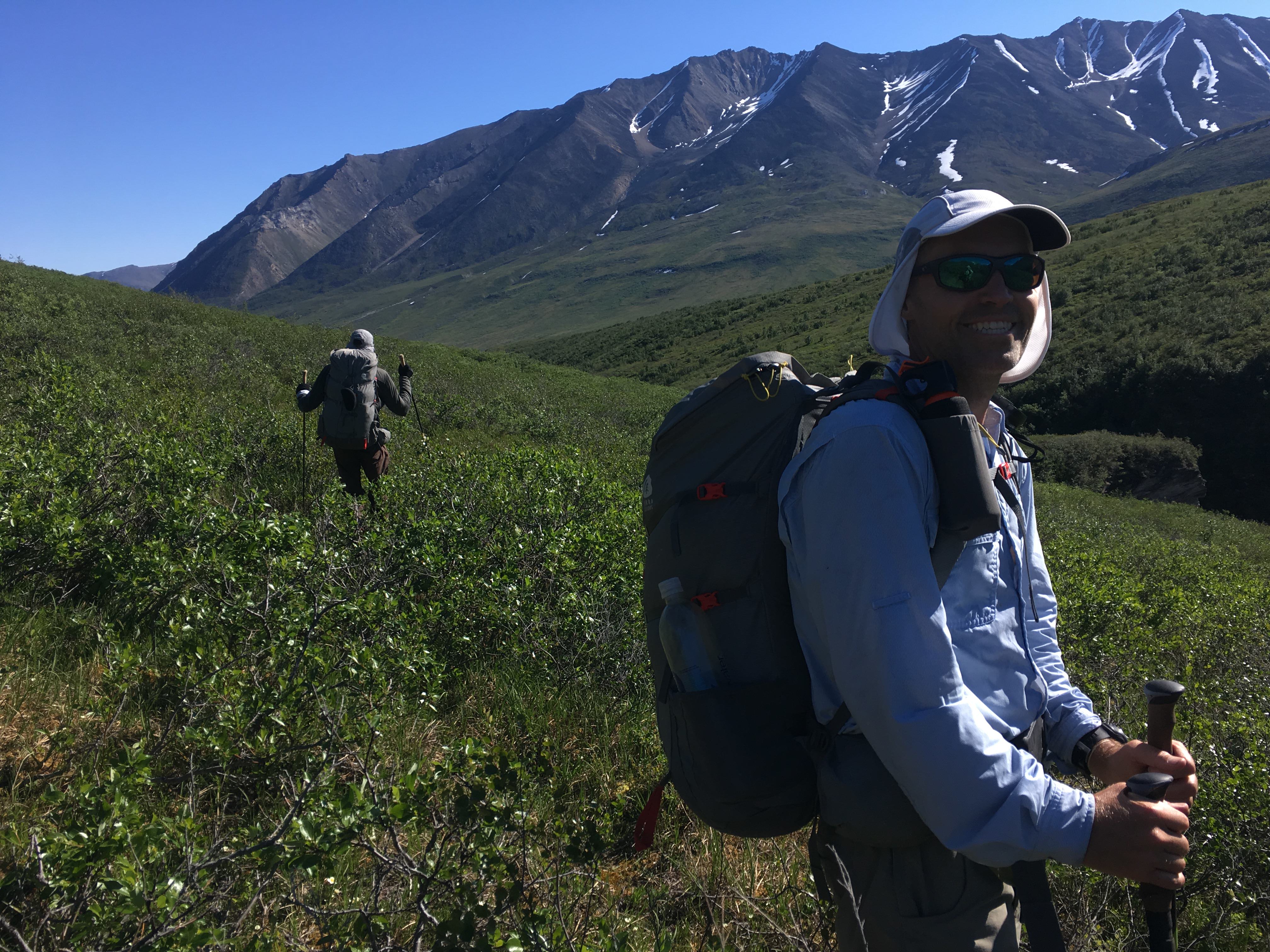 We had lunch overlooking the confluence with the Noatak. The valley stretches out wide, the walls were majestic, the rivers braided. It was beautiful and grand. 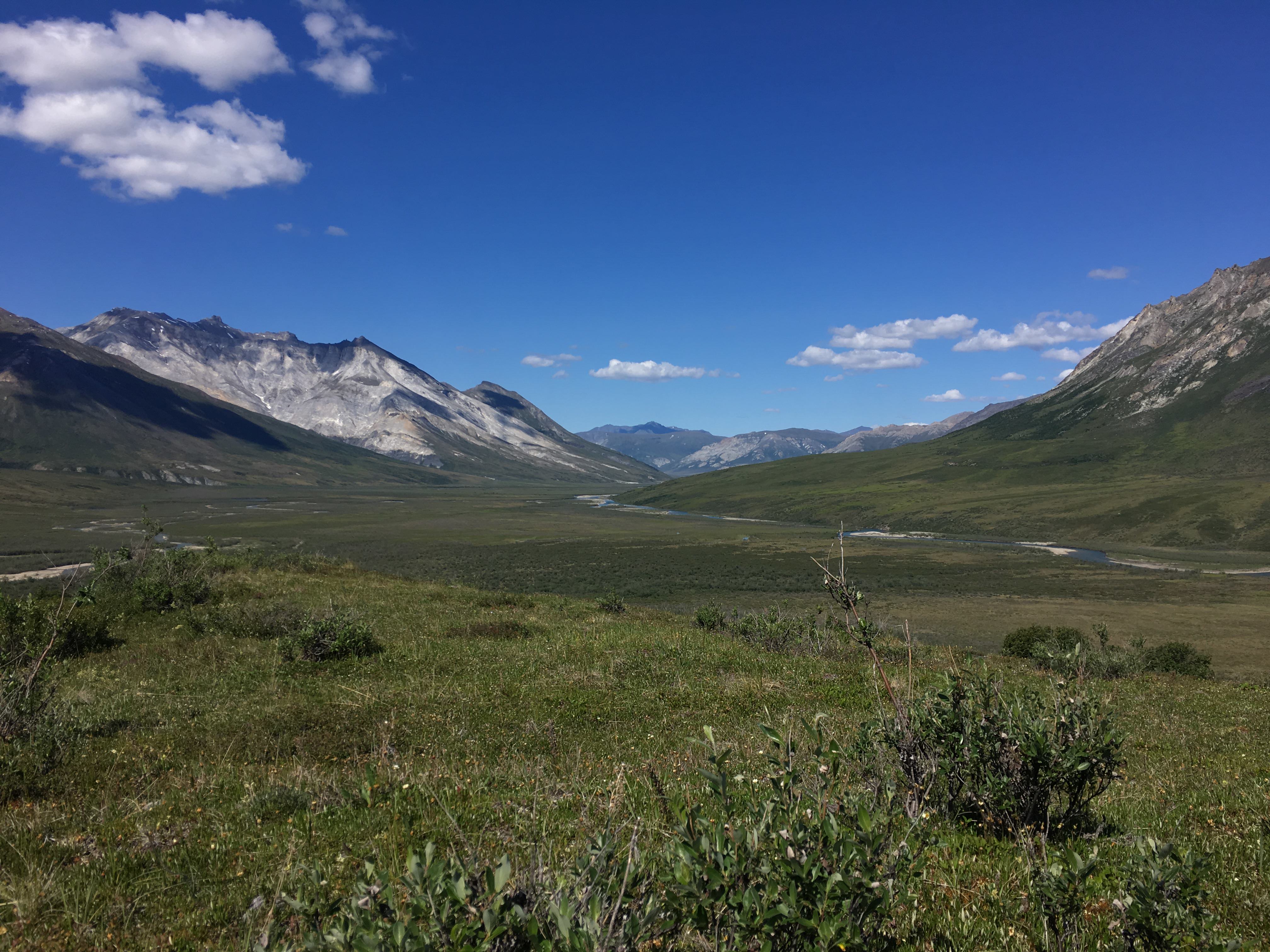 The rest of the day was spent working our way up the south bank of the Noatak. Some times we found game trails almost as good as groomed park service trails though we also had tussocks to trip over in many places. In a few places, particularly at the end of the day, things got a little brushy. 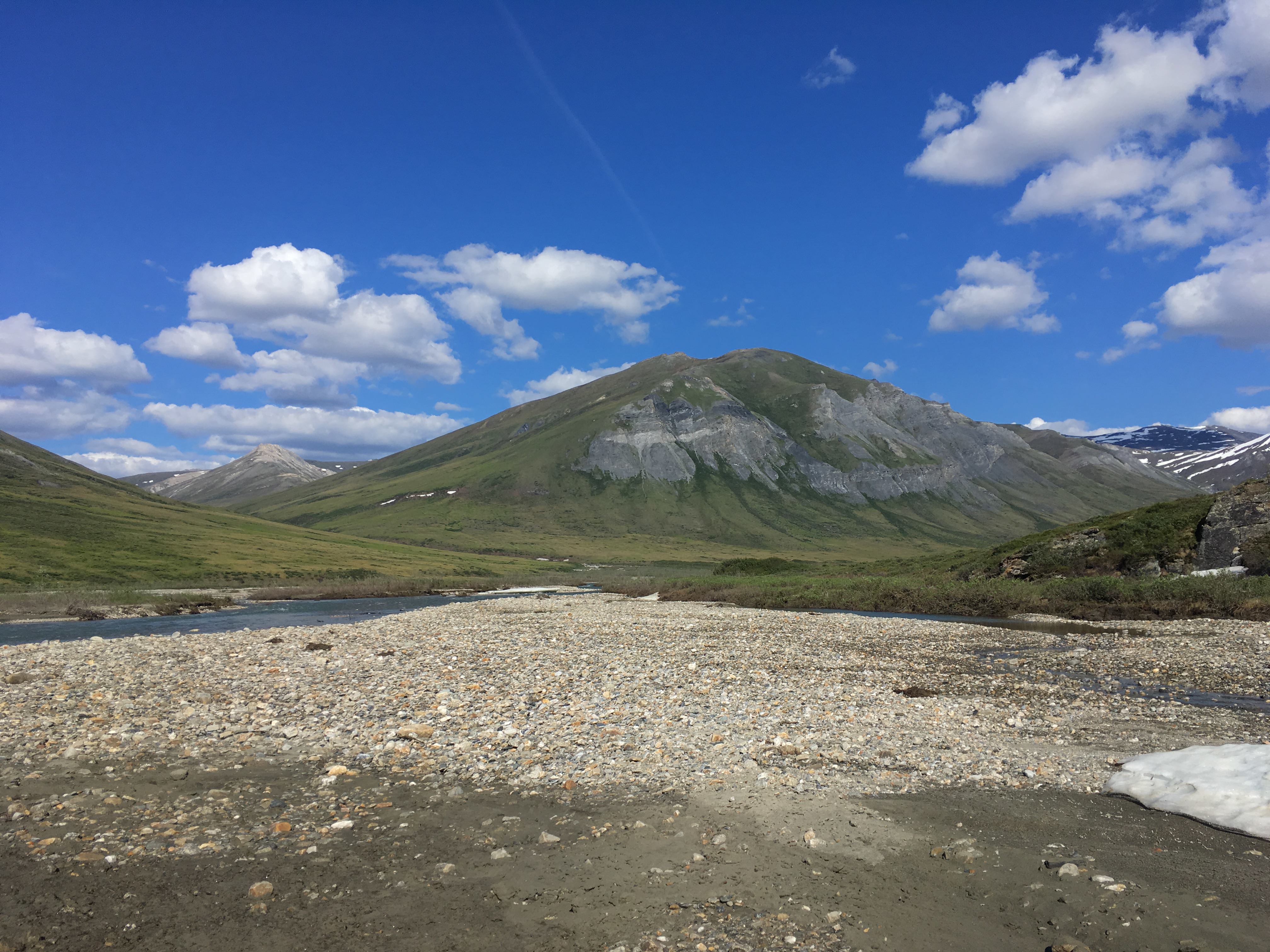 We found 3 pieces of trash: a torn section of a packraft which Andrew picked up and stuffed in his pack, a large section of PVC pipe, and a rusted out bucket. Even in the distant middle of no-where people leave their mark. 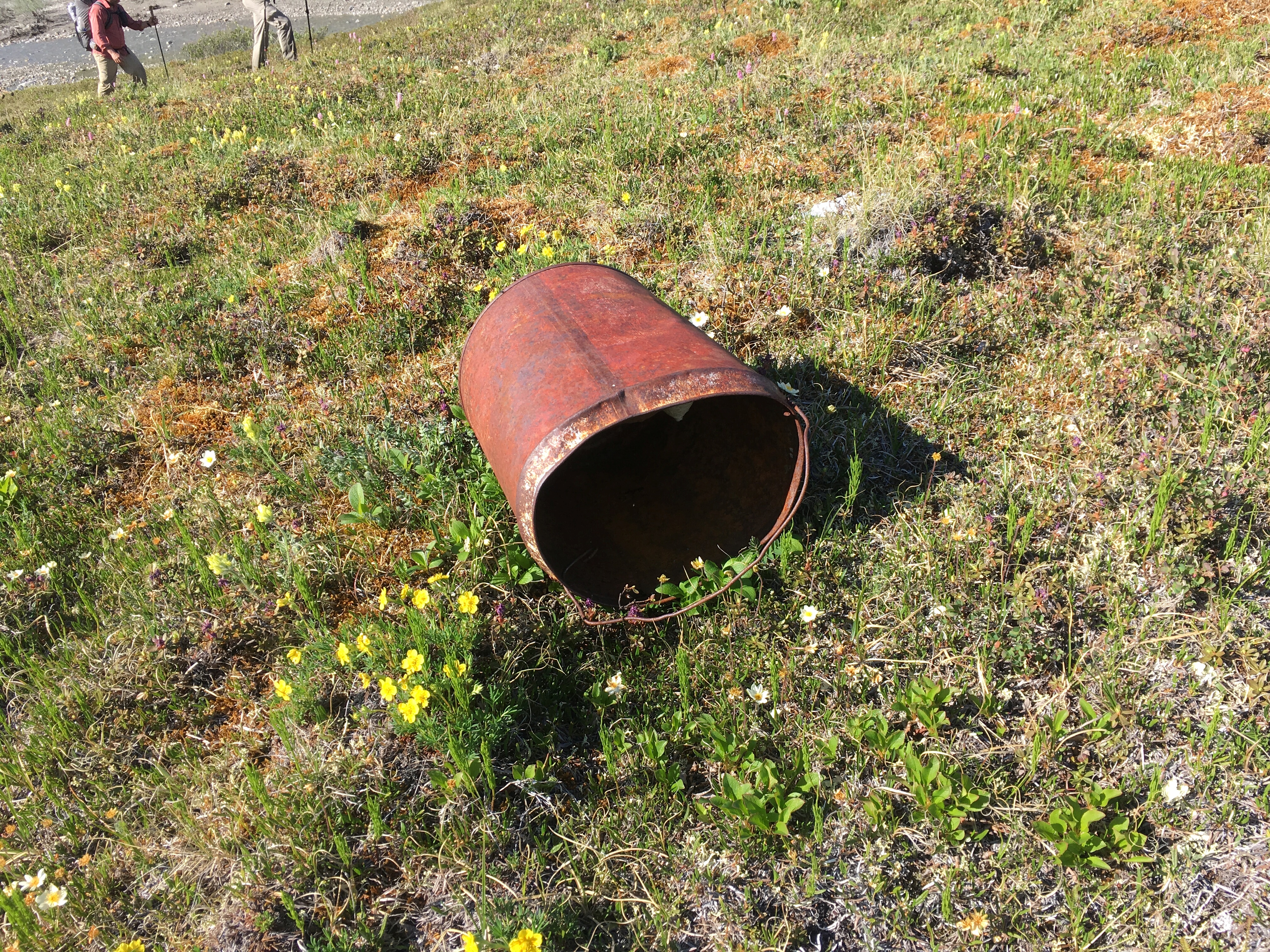 We wound up camping about as the group energy level was dropping. Apparently we made it about 19 miles today which is pretty good for off trail travel. The camp was pleasant and sunny near the river and some washed their clothes or dunked themselves.

We’re not expecting the sun to drop behind the mountains for long tonight so it’ll be hot tonight. There’s a light breeze which will help. Tomorrow is supposed to be a two pass day.