The morning opened with six miles to Carson Pass where there was a visitor’s center with fruit, brownies, cheesecake, and soda. The walk in climbed up over a ridge. Here’s a view on the way up looking south. 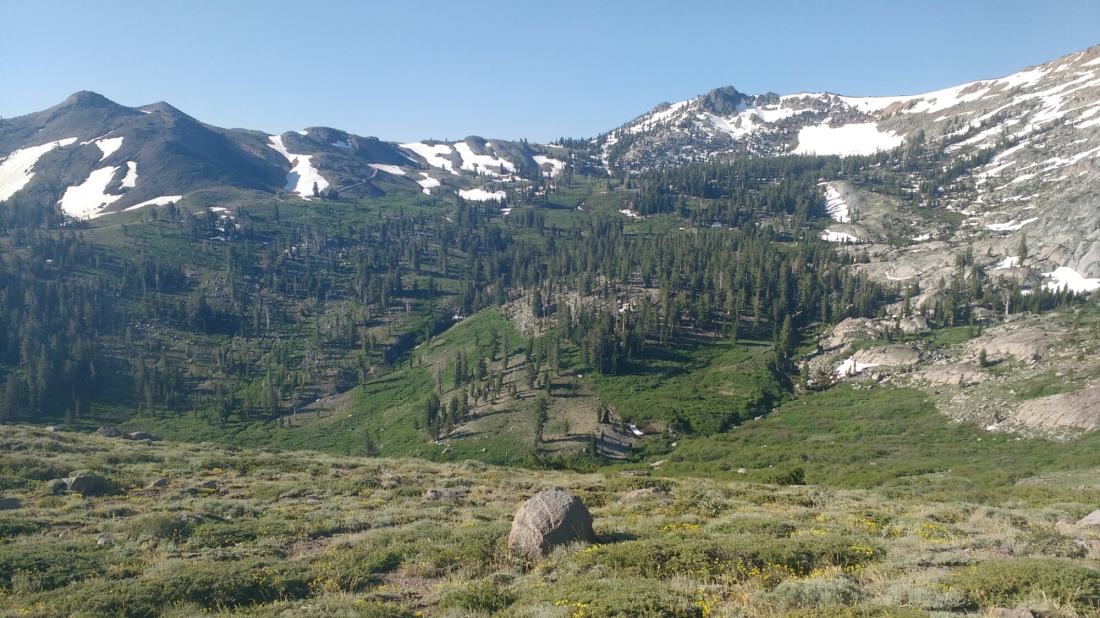 After the Carson Pass visitor’s center there was an easy up-and-over to get to the Echo Summit trailhead. The top of the rise was an open meadow with soft waving grass which looked a little like a coat of fur.

I found Rip Snorter, Jeff, and John at the top on their cell phones using a shred of service to try to find accommodations in South Lake Tahoe with their group. I’d hiked with them and that group some in the Sierra before Muir Trail Ranch and was interested on my info they had since everyone expects South Lake Tahoe to fill up for the July Fourth weekend.

I got down to the Echo Summit trailhead, after having mistaken the Adventure Mountain parking lot for it. A retired missionary named Coppertone was sharing God’s love with hikers by making them rootbeer floats. Since the trail doesn’t actually go through the Echo Summit parking lot, but brushes by it, he’d advertised his presence my taping an ice cream container to a root beer bottle with, “Coppertone is here” scrawled on them. I guess he’s pretty well know because he’ll provide trail magic for a week and then move to a new location attempting to get there when the same group if hikers Pass through.

From Echo Summit I got a hitch into South Lake Tahoe from two day hikers who are section hiking the Tahoe Rim trail. They’d left their keys in the car which they’d driven around to the Carson Pass trailhead but as I was going out to find another hitch, reiterated their offer to give me a ride. Since I’d thought I’d left my SPOT at the Carson Pass visitor’s center, and they were going there before South Lake Tahoe, I accepted and we waited until their daughter showed up with a key to get underway. They also gave me a beer which makes for three instances of trail magic today. Crazy.

They gave me a ride all the way to the Mellow Mountain Hostel on the far side of town where I had a reservation. After checking in, I went on a rampage of shower, laundry, and internet usage. I was up till 11pm uploading blog posts because I don’t trust the WordPress app to preserve the order in which I press upload so I had wait for each to finish before uploading the next. I also got around to moving my gym subscription to my new credit card since their calls accounted for the majority of voicemail on my phone.